Round 18: Tommi Hovi vs. Wessel Oomens 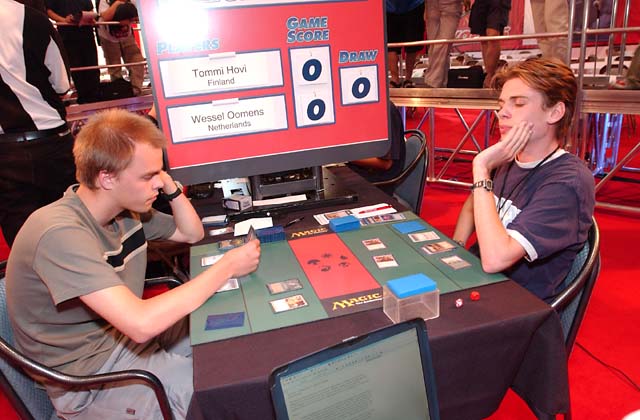 The winner of this match had a shot at Top 8, depending on tiebreakers. Ryan Fuller walked over to the spectator area and joked, "Wessel Oomens, playing Tommi Hovi for Top 8! Tommi, do you know this guy?" Hovi made sure to check his sideboard, explaining that he received a game loss last year at Worlds for forgetting to desideboard.

Oomens mulliganed his opening hand, and Hovi mulliganed twice, going down to five cards in hand. A Tundra was played by Oomens on the first turn, and was killed off by Hovi's Wasteland. Oomens Brainstormed in response. He then missed two land drops, while Hovi didn't miss a beat. Oomens finally found a land, and summoned Ramosian Sergeant, which was removed right away with Swords to Plowshares. Hovi played a main phase Impulse, but missed his third land drop. Oomens attempted to get some lands with Tithe on end step, but Hovi used Force of Will to counter it. Hovi played Seal of Cleansing a few turns later.

Oomens finally found a second land, and played two Mothers of Runes in one turn. Hovi then used Enlightened Tutor to fetch Oath of Druids, which was cast on his turn. Oomens played his own Seal of Cleansing, destroyed the Oath, and attacked for two. Hovi then played Sylvan Library, and was left with only one card in hand. On the following turn, Hovi kept two cards off Sylvan Library and took four damage, going to eleven life points. The Mothers attacked again, bringing Hovi to nine. Oomens summoned Steadfast Guard, and Hovi played Brainstorm. The pressure was on, and Hovi needed an answer fast.

Hovi summoned Spike Feeder, and Oomens used Swords to Plowshares on end step to remove it. In response, Hovi gained four life, and bought himself a turn. During his next turn, Hovi tapped out to play Morphling, but Oomens had another Swords to Plowshares. The following attack brought Hovi down to eight life points. Oomens then summoned Meddling Mage, naming Oath of Druids. The next attack brought Hovi down to three life points, and Hovi played Enlightened Tutor on end step. He then, get this . . . didn't tutor for anything, because he "didn't need anything." He shuffled, drew a card and scooped, and showed me the Crater Hellion that was stuck in his hand. 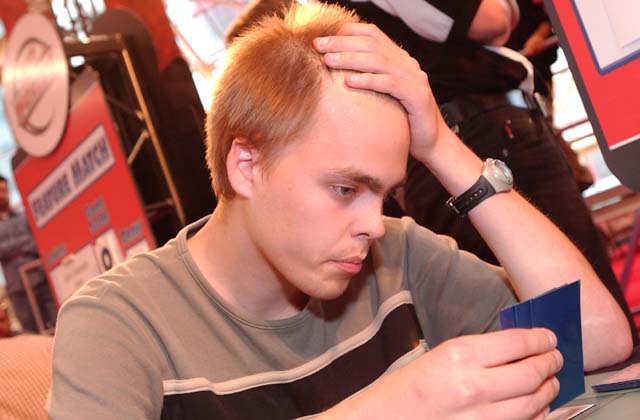 Hovi kept his opening draw this time, but Oomens mulliganed once again. Regardless, he started off strong with a first turn Ramosian Sergeant off a Tundra. Hovi used Wasteland to kill off that Tundra, and Oomens missed his land drop, leaving him with no lands in play. Hovi then played Oath of Druids, and things were about to get very bad for Oomens. The Oath activated, and Hovi now had a third turn Morphling to Oomens' one land and Sergeant. Not bad. Oomens did draw into a second land at this point, but it was a bit late.

A Brainstorm was cast by Hovi, and Wasteland followed, bringing Oomens back down to one land in play. Oomens responded by Disenchanting the Oath, but the damage had been done, and "Superman" was out and attacking for five a turn. Oomens conceded a few turns later. 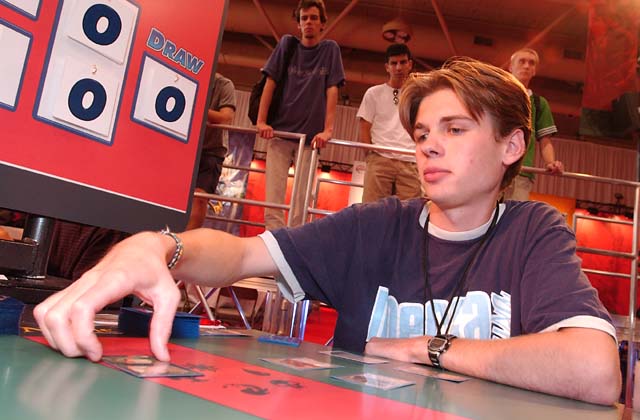 Oomens went first, and mulliganed his opening hand for the third time this match. While he shuffled, he said to Hovi, "I can see your smile. I know you have a Wasteland in your hand." He played Mother of Runes on turn one, and cast Tithe on second turn main phase to get a Tundra, which he played right away and used to cast Cursed Scroll. Hovi played Oath of Druids on turn two, and Oomens attempted to Erase it, but Hovi had Force of Will. Oomens played another Cursed Scroll, and was stuck at two lands. Oath of Druids activated on Hovi's turn, and got Crater Hellion, which killed off the Mother that had been attacking.

Hovi now played Wasteland and destroyed Oomens's Tundra, leaving Wessel with only one land in play. However, Oomens drew another plains on the following turn. The Hellion died off, and Oomens was none too eager to play any creatures. He tried to play Seal of Cleansing, but Hovi had Counterspell. The situation at this point was bad for Oomens. Playing a creature meant that Morphling would probably show up, but with every turn that passed, Hovi manipulated his deck more, and drew into quality cards to handle threats. He Tutored for Sylvan Library on Oomens's end step, and played it during his turn. Hovi had one card in hand at this point while Oomens had two, although Tithe got Oomens two more lands, and broke him out of mana screw.

On the next turn, Hovi lost four life to Sylvan Library to draw two cards, and played Powder Keg. He put a counter on it, leaving it ready to kill off the two Cursed Scrolls. The next few turns offered very little action, as both players did next to nothing. Hovi's plan at this point was to take control of the game, and hard cast Morphling to win. Oomens finally broke the monotony when he cast Meddling Mage, which resolved and named Counterspell. A second Mage followed, and Hovi responded by playing Swords to Plowshares on the first Mage. The second one resolved, and named Counterspell. Oomens then played Seal of Cleansing, but Hovi countered it with Force of Will. The plan had obviously not worked, and Oomens used Swords to Plowshares on his own Meddling Mage to ensure that Hovi's Oath didn't trigger. Hovi Brainstormed twice to find an answer, but didn't get one, and the Swords resolved.

Hovi blew the Keg, taking out both Cursed Scrolls, and summoned Morphling, leaving one land untapped. Oomens triggered Oath on his turn and got Meddling Mage, which named Counterspell. Oomens got a warning for slow play from a judge, because he took too long to name a card with the Mage. Hovi's Morphling attacked for the next few turns, and Oomens tried to eliminate the Oath with Erase. Hovi responded with Swords to Plowshares on Meddling Mage, and Counterspell on the Erase. Oomens then played out his hand, bringing out two Sergeants, Cursed Scroll, and a Soltari Priest, which was Counterspelled.

Oath triggered on Hovi's upkeep, bringing out Spike Feeder. Seal of Cleansing was sacrificed to kill off Oomens's Scroll, and Morphling became bigger with the help of Spike tokens, and finished off the job.