Round 18: Wrong Time for a Bad Matchup

are times when it is difficult to do feature matches and be impartial, and there are other times as a Magic fan, when you would really rather both players could win the match. This is one of those times. 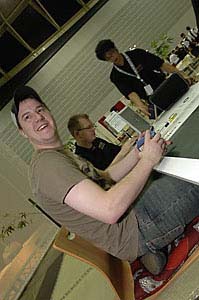 Craig faced a brutal matchup standing between him and the Top 8.

Fans across Japan love the man they call A. A. for his creative, rogue deck designs and his Limited mastery. Reporters who cover Japan have been picking him as the next breakout star from the Land of the Rising Sun for some time, but he has yet to translate his success at home to success on the Pro Tour. He now has his chance to do so on Magic's biggest stage, but he'll have to win here and do a little praying in order to get his shot at Sunday.

Sitting across from Asahara is former U.S. National Champion Craig Krempels. Krempels seems to do very well at multi-format events and this weekend is no different, since he's also in Top 8 contention. His Rift/Slide deck has done well for him so far, but he must now face perhaps the worst matchup imaginable from the only player left in the entire tournament running Balancing 'Tings.

Asahara had to mulligan his first hand but kept his six cards and started with a turn-two Terrarion, while Krempels had a third-turn Astral Slide, a critical piece in his quest not to die to Balancing Act shenanigans - but he would need a threat to make it relevant.

Krempels tried to further ramp his mana with Sakura-Tribe Elder, but expressed mild dismay as Asahara cast Burning Wish for Balancing Act. Eternal Witness made an appearance for the former TOGIT member and he now had one of his main draw engines online.

Maindeck Mana Short smashed Krempels in the face on his turn, tapping him out and clearing the way for Balancing Act and Terravore on the next turn to give the win to Asahara. Can Astral Slide even come close in this matchup? 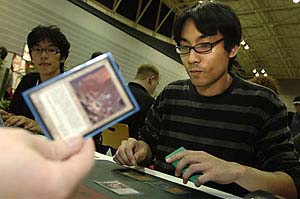 Asahara didn't worry at all about Astral Slide.

Krempels brought in three Loxodon Hierarchs and two Wing Shards from his sideboard, taking out two Wrath of Gods, two Naturalize, and a Krosan Tusker.

Krempels looked at a hand of two Tranquil Tickets and five spells on the play, briefly considering it before dipping back into his deck in search of six better replacements. The six revealed five lands and a Tusker, but two of those were cyclers, so it was deemed acceptable.

"This is actually the nightmare matchup. Like… every time I cycle, his Terravore gets larger," Krempels said before casting his first spell of the game. Asahara simply ramped up to four lands, sacrificed them all and cast Balancing Act, followed by Terravore and Chromatic Sphere.

"Did I lose again?" Krempels asked as Asahara tapped all his mana and moved his lands directly into the bin. "Already? Maaaaan!"

Two turns later, Krempels' nightmare was proven true and his dreams were crushed. Asahara's quest for a breakthrough on the Pro Tour was achieved when his tiebreaks held up and he slipped into the Top 8 as the eighth seed.