Round 19: Brian Hegstad vs. Jeroen Remie 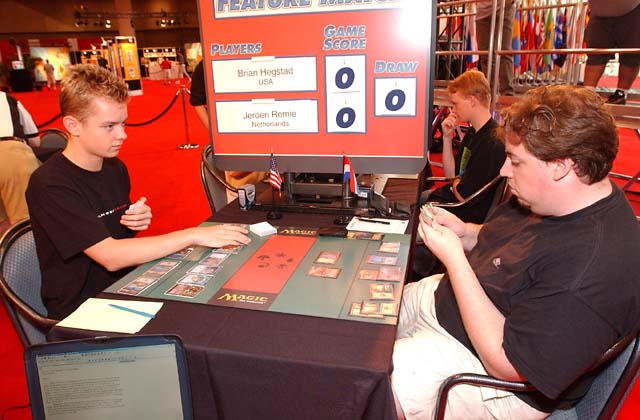 The Standard portion of Worlds on Wednesday probably disappointed the Americans back home who were cheering on their team. Many have speculated that the relatively unknown Eugene Harvey and Brian Hegstad would not be able to continue the tradition of American dominance at Worlds, and the first day pointed to that, with the team going 6-12 combined. This changed on the second day, when the Americans went on a tear, and got back into contention. Going into today's draft, they were in second place, twelve points behind the Dutch. However, a single match win in today's team draft event counts for twelve points, while the individual competition awards three points for a win. This means that every match has 36 points on the line (12 for each player), allowing teams to catch up.

Remie went first, and Hegstad summoned a Reef Shaman on his first turn. It was used over the next few turns to deprive Remie of blue mana by turning his island into a forest on upkeep. Hegstad brought out the first real creature of the game when he summoned Living Airship, while Remie cast Harrow on end step. Reef Shaman turned Remie's swamp into a forest on upkeep. As Hegstad untapped and took his turn the swamp came back, and Remie used it to Annihilate the Airship. Hegstad came right back, bringing out a kicked Faerie Squadron. Remie now had seven mana available, and used all of it to bring out Lotus Guardian. He joked, "I'm playing five color . . . I'm playing Birds of Paradise!"

Hegstad brought out Stormscape Familiar on the next turn, as well as Phyrexian Rager. Arctic Merfolk then came out, bouncing back the Rager. Remie now untapped, and dropped his bomb: Questing Phelddagrif. Hegstad replayed his Rager to draw another card, and Reef Shaman turned a swamp into a forest, allowing Hegstad's Worldly Council to look at four cards. He followed this up with Cavern Harpy, and in response Remie killed off Hegstad's Rager with Consume Strength, to take away the card drawing engine. Once the Harpy came into play, it bounced Reef Shaman. 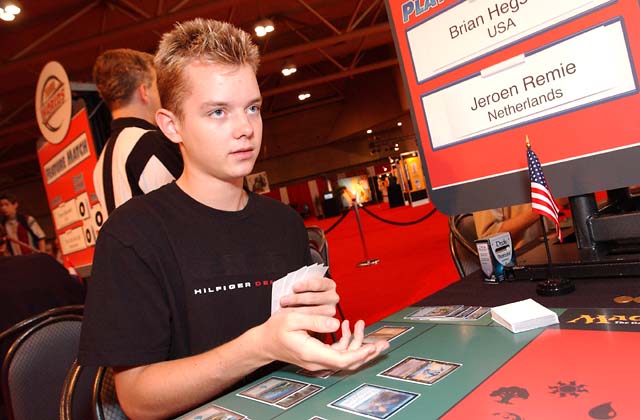 The next turn saw Remie go all out, as he attacked with his Lotus Guardian and Phelddagrif. The Squadron and Harpy double blocked the Guardian, and Remie used Explosive Growth to keep his 4/4 flier alive. The Squadron went to the graveyard, and Cavern Harpy returned to Hegstad's hand. Remie tapped all seven of his lands once again, and dropped another bomb: Penumbra Wurm. Sawtooth Loon was now played by Hegstad, who needed an answer to Remie's army of fatness. It bounced the Arctic Merfolk, and Cavern Harpy was played to bounce the Loon.

Remie drew, shrugged, and attacked with all his creatures. Cavern Harpy blocked the Phelddagrif, and Recoil was used to bounce the Wurm. Remie discarded Quirion Trailblazer. Lotus Guardian dealt four damage, and the Harpy came back. Remie then replayed the Wurm, and sent the turn over. Hegstad summoned Hunting Drake, putting the Wurm on top of Remie's library. He then played Cavern Harpy to bounce the Drake back, and it seemed that he might in fact have a way out of the situation. However, he was eight, and the Drake/Harpy team had too much work to do. The Guardian and Hippo attacked, and Harpy blocked the Hippo and came back, bringing Hegstad down to three.

The Loon came into play and bounced the Familiar, and Hunting Drake came back down to put the Wurm on top of Remie's library for the second time. Both of Hegstad's creatures blocked each of Remie's monsters, leaving him with no creatures on the board. Hegstad played Stormscape Familiar, followed by Hobble on the Penumbra Wurm. He also summoned Tidal Visionary, and bounced it with the Harpy, which at least gave him another turn to block. Remie then played Serpentine Kavu, making Hegstad's situation look even worse. Still, Hegstad wasn't out of the game. He played Manacles of Decay on the Phelddagrif, and Cavern Harpy, followed by Slinking Serpent. This meant more chump blocking, which really meant nothing more than delaying the inevitable. Hegstad conceded, as he now had no possible way to win the game.

Hegstad chose to draw first. Neither player did anything until Hegstad made the "play of the century," casting Sawtooth Loon, which bounced itself and let Hegstad look at two new cards. Stormscape Familiar came out on the next turn, and Silver Drake bounced it. Remie played his sixth land, and was visibly frustrated, as he had nothing to play. Hegstad attacked with the Drake, which was followed by Remie played his seventh land, and summoning Lotus Guardian. Remie, who was obviously not happy with his draw, declared "My first play of the game . . . again!" This forced Silver Drake to stay back, but Hegstad brought out Slinking Serpent to walk over Remie's forests. Remie then attacked, and played Quirion Sentinel, which allowed him to bring out the Phelddagrif.

The Serpent, Familiar and Drake now attacked, and dealt six damage to Remie. Recoil was played on the Phelddagrif, and Remie discarded Allied Strategies. This seemed like it could stop the Hippo from coming back out, since Remie needed to use a Sentinel to get the blue mana necessary to cast it. However, when Remie took his turn, he played an island, noting how lucky he was, and brought out the Phelddagrif once again. Hegstad took his turn and neutered Remie's attack by playing Hobble on the Phelddagrif, and Manacles of Decay on Lotus Guardian. He then attacked with the Drake and Serpent, which dealt five damage total. Slinking Serpent attacked a few more times, and finished up the job. 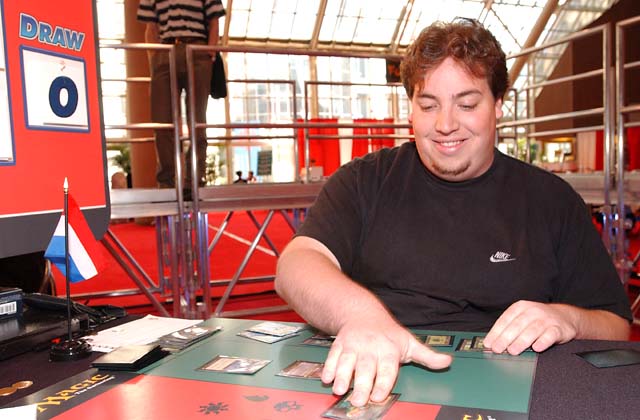 Remie played Thornscape Familiar on turn two, and was incredibly excited. He joked "I'm finally going to play something!" Hegstad answered back, telling him "It's only turn two." It attacked on the next turn, and Remie tried to pump it up with Aggressive Urge, but Hegstad countered that with Confound. Hegstad played Vodalian Serpent without kicker, which was bounced by Cavern Harpy on the following turn. A Reef Shaman came into play as well. Remie summoned Quirion Trailblazer, while Hegstad's Harpy attacked through the air for two damage. Hegstad then tapped out, bringing out a kicked Vodalian Serpent. Remie brought out the Phelddagrif, and Quirion Explorer. Hegstad noticed that Remie forgot about the Familiar when he played the Phelddagrif, which caused him to burn for one.

Reckless Spite now took out the Phelddagrif and Familiar, leaving the path clear for Hegstad's attackers. Remie chump blocked with his Trailblazer, which left him with only an Explorer in play. He then took his turn and went digging for an answer, as he played Allied Strategies. Hegstad brought out Phyrexian Rager and a Silver Drake, and time was called on Remie's next turn. Dead Ringers took out the Serpent and a Reef Shaman, but Hegstad's aerial team still attacked for five. They were joined by a kicked Faerie Squadron, and Remie conceded.