match started poorly for China, as their champion Hui Zhang had registered a 39-card deck. He was visibly flustered as the judges pulled him aside to explain the ruling. He could beat the odds by winning two in a row against Takuma Morofuji, but it wasn't going to be easy. 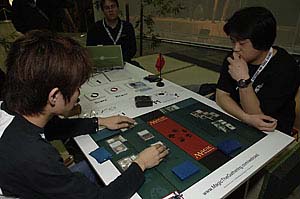 Shimura had an early lead on Long.

Most pros have expressed dislike for Golgari this weekend, so it was a surprise to see Ichirou Shimura facing off Hui Chao Long in a Golgari mirror match. Shimura took the early advantage in Game 1, starting the aggression with a Trophy Hunter. Song played a Mortivore on turn three with the aid of Selesnya Signet, but it quickly died to the Keening Banshee. Song made a Root-Kin Ally to block the Trophy Hunter, but Shimura had the Gaze of the Gorgon.

Shimura's game plan came together. Song tried to populate his side of the board, but the Japanese player made a Woebringer Demon. Forced to sacrifice his Siege Wurm, Song couldn't do much as Shimura's troops came over. He tried to get back into the game with a Woodwraith Strangler, equipped with Fists of Ironwood and Moldervine Cloak, but the Keening Banshee, Trophy Hunter, and a Mortipede finished the Chinese player off.

Song had a much more aggressive opening this game, starting with a turn-two Dimir Signet, turn-three Mortipede, and turn-four Root-kin Ally against Shimura's Civic Wayfinder. Shimura had the Woebringer Demon in his hand again, and knew he needed to keep Song's creature count low to exploit the Abyss on wings. In a repeat of last game, he played a Keening Banshee to kill Song's Mortipede. Song followed up with a Sewerdreg. Shimura saw the moment to play the Demon, and Song was forced to lose both of his creatures. Shimura told the Demon to hit the showers and resumed his flying offense.

The men kept marching onto the table. Song recruited a Lurking Informant and Greater Mossdog. But Shimura's Keening Banshee kept attacking and bringing Song ever closer to death. Song used the Informant to try to bolster his own draws, but wasn't able to find anything that would stop the pain. Shimura found his Mortipede. Song looked at his top card, and frowned. Vigor Mortis wasn't going to help. Shimura was the first to defeat his opponent, putting Japan in the lead 1-0.

Around the Feature Match Pit

Red and white clashed on the other side of the crimson bridge. Hui Zhang made up his early loss from deck registration errors with a quick win and was apparently sitting pretty, with a Voyager Staff ready to go just in case. Takuma Morofuji was trying to stem the tide with his Thundersong Trumpeter and Wojek Embermage against a Veteran Armorer and Conclave Equenaut. The Fiery Conclusion, Faith's Fetters, and Galvanic Arc in the Japanese champion's hand looked poor in the face of Voyager Staff. 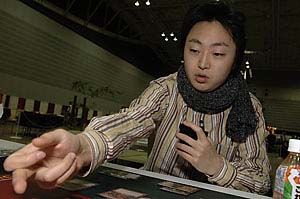 Japan's national champion Morofuji clinched the first round for his country.

After an attack with his smaller men, Morofuji used a Fiery Conclusion to kill off the Veteran Armorer. Zhang kept his Staff in reserve, sensing foul play. Morofuji added a Conclave Phalanx that netted him two life, and in a desperate bid to stay alive he played a Faith's Fetters on his Plains. That life gain was just enough to keep him alive. Zhang drew lands two turns in a row. Morofuji smiled, as he topdecked his first pick of the draft, a Lightning Helix. The Helix wasn't necessary, since he could just play his Galvanic Arc on Zhang's Equenaut. That extra redundancy solidified the deal, clinching the match for Japan.

In the third but ultimately irrelevant match, Long had one game up on Masashi Oiso with nine minutes on the clock. Since the first game took 40 minutes, it didn't seem like Oiso had a chance. But Oiso opened with Halcyon Glaze, followed by Snapping Drake and Tattered Drake. Long made a Snapping Drake of his own, but Oiso and the Glaze wouldn't stop. He played a Stinkweed Imp and sent his army of blue flyers in for a three-minute kill. The two quickly shuffled for Game 3, and that game ended in a draw. Oiso's removal and Drift of Phantoms kept Song from getting in the last licks.