Round 19: Frank Karsten vs. Eugene Harvey 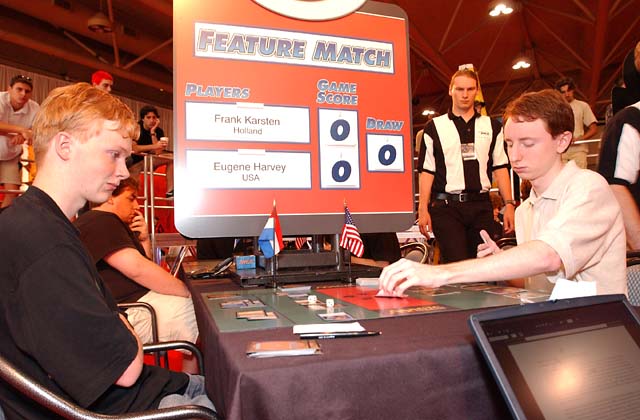 After the draft portion, Team USA had a few slight issues here, in part because of a pick made by Brian Hegstad that may have quite a noticeable effect on this match... Brian took a Stormscape Familiar over a Silver Drake, which would have been his third, because he felt it was better for his deck, but it allowed Frank Karsten from the Netherlands to get that Silver Drake and play it against Eugene Harvey. After the draft portion, Team USA was able to explain and make clear to Brian why that was the incorrect pick, and if Eugene loses to a Silver Drake, the team will be quite frustrated at Hegstad for the pick. Eugene won the die roll and played first, with a plains starting off his four colors of mana. Frank played an island, as did Eugene on his next turn; Frank's second turn was likewise a plains, but with a Galina's Knight to cast as well. Eugene played a forest and responded with Amphibious Kavu, to which Frank played a second island and a Stormscape Familiar.

Pulling out his life sheets, Eugene considered the attack, then served with his Amphibious Kavu. He followed his attack with a second forest and an Aurora Griffin, and Frank attacked back with Galina's Knight, then played a second plains and Reef Shaman. Eugene attacked with his two creatures, knocking Frank down to fourteen, then played an island and finished his turn. Frank checked how many cards were in Eugene's hand, that number being three, before getting even with his Knight and Familiar, reducing Eugene to fifteen life. Frank had a kicked Benalish Lancer then passed the turn, and Eugene played Fact or Fiction, turning up three plains, a forest, and his Illuminate. With the Illuminate put against the other four, Eugene took the Lands and went on to his turn. Reef Shaman turned Eugene's plains into an island, but Eugene merely played another after his attack with the Aurora Griffin, which brought Frank to twelve life. Kavu Climber finished up the turn for Eugene, and Frank attacked with his Lancer and Familiar, which Eugene took, going to ten life. Frank used his Reef Shaman to make a swamp, then cast a 4/5 Emblazoned Golem. Eugene attacked in the air with the Aurora Griffin, evening up the life totals, and Eugene kicked up a Benalish Lancer of his own after playing another plains. Frank attacked with the two monsters and the Familiar, and Eugene blocked Lancer to Lancer, Climber and Kavu to Emblazoned Golem. Frank cast Day, and used it to wreck Eugene, destroying all three of the creatures at no cost to his own. Eugene attacked with the Griffin again, then played Ordered Migration for three, and another plains. 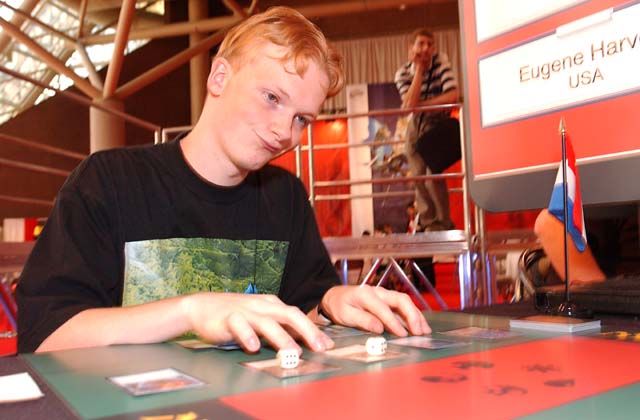 With eight life apiece, Frank attacked with everything but his Reef Shaman, and Eugene blocked the four-power creatures with two of his tokens, going to five life. Frank played Manacles of Decay on the Aurora Griffin, and Eugene played Quirion Explorer and Aurora Griffin #2, then passed the turn. Given a very low prospect of survival, Eugene was just trying to hold on as long as possible and hope for there to be a way out on the top of his deck. At end of turn Frank had a Recoil, on the fresh Aurora Griffin, thanks to his Reef Shaman, which allowed Eugene to discard a 5/5 Dodecapod. Frank then untapped and used the Shaman to make another black source, and Frank played a kicked Probe on Eugene, getting two lands out of his hand and leaving just the Aurora Griffin. Frank passed the turn, and Eugene attacked with the remaining Bird token, which traded with the real Bird, Stormscape Familiar. The Aurora Griffin entered play again on Eugene's side, and Frank used his next turn to play a Silver Drake, which gated a Galina's Knight that was immediately recast. Frank turned a forest into a plains, during Eugene's upkeep, and Eugene played a Serpentine Kavu and passed the turn. Reef Shaman made a mountain, which activate the red ability of Manacles of Decay, and the Silver Drake attacked Harvey, getting through for the three points, putting Eugene at two life. A Razorfoot Griffin by Frank led to Eugene's concession.

Eugene chose to keep his hand, as well as play first, and he started off with a plains and Sunscape Apprentice. Frank had a plains as well, then Eugene got a free point in and played a forest. Frank played a swamp, and passed the turn. Eugene attacked again, and then played a second plains and passed the turn. Frank had another plains as well, but still no play. Eugene got in another attack, and Frank cast Night on the little Wizard, who unfortunately died. Eugene followed the failed attack with a Coalition Honor Guard, who was likely to prove quite strong in this matchup, and Frank played an island and Reef Shaman. Eugene got in an attack with the Flagbearer, then played Aurora Griffin. Frank's next turn saw him play another swamp and a Silver Drake, after using the Shaman to make an island with which to re-cast itself. Eugene attacked with both creatures relentlessly, and Frank took the bait and blocked the Aurora Griffin, which led to Eugene playing Gerrard's Command to kill the Drake. Without another land, though, Eugene was not also able to increase his army, and so he had to pass the turn to Frank without any pressure added. Frank had a 4/5 Emblazoned Golem once again, and Eugene merely untapped his creatures. Frank turned a forest into a plains during the upkeep of Eugene's turn, and the Aurora Griffin swung again, reducing Frank to twelve life. With a mountain, now, Eugene played Amphibious Kavu, keeping a white and green mana untapped to threaten another Growth spell. 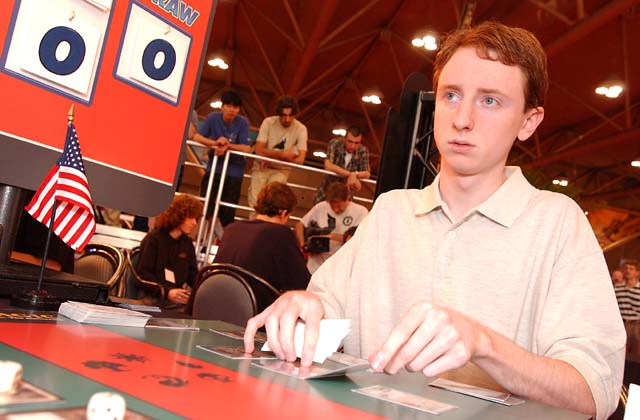 Frank attacked with the Golem anyway, and Eugene took the damage, then Frank played a kicked Benalish Lancer. Eugene's mountain became a plains during his upkeep, and Eugene attacked with his Griffin again, making the race a 16-10 affair. Eugene then played Quirion Explorer, hoping to gain access to blue mana, and passed the turn. Frank played a kicked Probe before his attack, and as satisfying as it might have been, Eugene did not have the Dodecapod this time around. Frank discarded two lands, while Eugene lost Ordered Migration and Aura Blast. Frank attacked with the Lancers, and the race became 12-10... Eugene had the early lead, but Frank was catching up fast with his fat creatures. The mountain was neutralized again during Eugene's turn, and the Aurora Griffin took to the air... 12-8. Eugene then played his own Benalish Lancer, likewise with kicker. Frank played a three-point Worldly Counsel, then a Razorfoot Griffin, and passed the turn. Again the Shaman did its job, and Eugene played Fertile Ground on his Plains.

Frank played a Lashknife Barrier, and suddenly things were looking a whole lot better for him this game, and a lot worse for Eugene and the American National Team. Benalish Lancer attacked, and Quirion Explorer prevented the four damage to Eugene, so Frank followed that up with a kicked Arctic Merfolk, returning the Reef Shaman then summarily replaying it. Eugene did nothing on his next turn, and the Lancer got through this time, making it eight to eight with the board position favoring Karsten. Eugene drew for the turn then played a Thornscape Familiar, and Frank attacked with the Lancer again on his next turn, and Eugene triple-blocked, with the Kavu, Lancer, and Honor Guard. Frank traded with the other Lancer, then used his Lancer to power a Death Bomb, targeting the Honor Guard and bringing Eugene to six life. To follow that trick Frank had a kicked Probe, and on Eugene's turn he merely had another Aurora Griffin to play. Frank attacked with the Golem and Griffin, and Eugene blocked the Golem with his Familiar, going to four life. Frank then played Silver Drake, gating the Shaman, then recast the Shaman and played his own Aurora Griffin. A topdecked Illuminate would have won Eugene the game, but instead he played a Serpentine Kavu, and then Manacles of Decay from Karsten ended the match with Harvey.