Round 19: Japan vs. Belgium 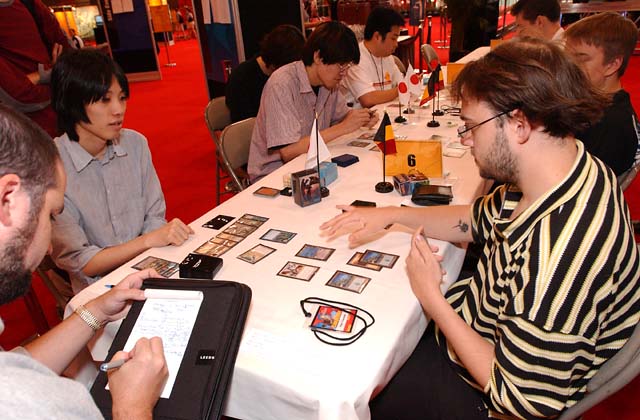 The team from Japan was in good spirits following their draft against the Belgian team. With due modesty and respect for their opponents, they felt that they had the better decks in at least two of their matchups.

The team felt most confident in the deck of the C player, Masaya Mori. Masaya had drafted a strong white-blue deck, which he put together during construction with a splash of black for Probe's kicker, Cavern Harpy, Dromar's Charm, and Death Bomb . . . and an even fainter splash of red (using blue's typical fixers) for Magma Burst. The Burst was never out of consideration; it sat in Masaya's deck from the very moment he laid out his cards on the table.

Masaya had also made clever metagame considerations against his opponent, Peter Gysemans - a Dismantling Blow against the u-w-r opponent's Raka Sanctuary; and two Jaded Responses in anticipation of the mirror match's favorable conditions.

The B player, Masahiko Morita, had drafted the classic red-black smashmouth deck, with some considerations for blue. While the deck's basic shell was laid out very quickly, Masahiko took the longest to finalize his deck. He seemed mainly concerned about including blue; but upon consulting his teammates, he agreed that the power a few islands conferred on the deck - Minotaur Illusionist, and a better Planar Despair and Nightscape Apprentice - was worth the late splash.

His metagame considerations were predominantly the Planar Despair, which will get around Gert Coeckelbergh's various g-w pro-black creatures; and Slay, which he took over Terminate with a Sabertooth Nishoba in mind.

Of the three decks, the team seemed least hopeful about the A position, drafted and constructed by Goro Matsuo. Goro's r-g-w-b deck had good cards; but his opponent Sinan Bolca had drafted three Hunting Drakes (and passed on one or two opportunities at a Cavern Harpy, to the Japan team's astonishment). To combat the Drakes, Goro did his best to prepare with a Disciple of Kangee, two Slingshot Goblins, Singe, and Canopy Surge. Goro's deck also contained two Ana Disciples, which will have both abilities accessible, and two Aura Shards to take out his opponent's Quicksilver Daggers.

The Belgian team, meanwhile, felt equally confident about their own decks. They, too, felt that they had the advantage in the A matchup; cards that buttressed Sinan's deck in addition to the Hunting Drakes included the Metagaming - whoops, that's Slinking - Serpent.

The B matchup, they felt, would be key: the sheer number of pro-black creatures they carried, as well as two Captain's Maneuvers and beef including Sabertooth Nishoba and Fleetfoot Panther, promised to give Masahiko's r-b rush deck a run for its money.

In the C matchup, Peter listed a red splash that included not only the Raka Sanctuary that Masaya was worried about, but also Magma Burst and Illuminate. He, too, dabbled in a fourth color: black for Bog Down. 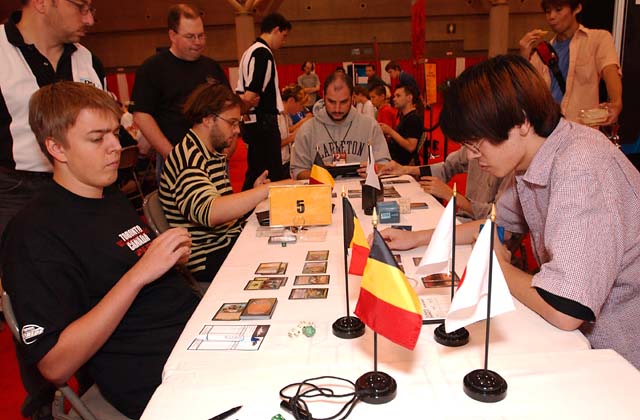 In the end, Belgium had more cause to be confident than Japan. While the C matchup went exactly as Masaya hoped - the Jaded Responses and Magma Burst were key - the decks drafted by the Belgian A and B players proved overwhelming for their counterparts. Here's how the matches broke down:

Match A (Sinan Bolca vs. Goro Matsuo): Sinan tortured Goro with his Hunting Drakes in two straight games. The beef in the Belgian's ground forces was efficient for this matchup: Zombie Boa, Dodecapod, and Slinking Serpent all shared the table at one point. This reporter saw Goro a bit frustrated when he had his Disciple of Kangee out in game two, but with no blue mana to power it. Since there was no reason not to swing with the Disciple, he did so, then laid down a Glade Gnarr . . . which was promptly time-walked by a Hunting Drake. This was pretty much representative the match.

Match B (Gert Coeckelbergh vs. Masahiko Morita): This was the matchup that this reporter saw the least of. But even from a distance, it was clear that Llanowar Knight and Fleetfoot Panther were enormous against creatures like Lava Zombie. At one point, Masahiko played his key removal, Slay, on Gert's Mirrorwood Treefolk - and Gert simply played out Fleetfoot Panther to rescue the board-changer.

Match C (Peter Gysemans vs. Masaya Mori): This reporter paid most attention to this matchup, since we at the Sideboard expected it to last the longest (u-w-x-x mirror). But this was not the case at all. Here are the details:

In game one, creatures came out early and furiously on both sides, with Peter calling out two Galina's Knights and Masaya taking to the sky with Tower Drake and Aurora Griffin. Since swinging away for equal damage was not enough for this two, they then traded discard spells: Peter's Bog Down and Masaya's Probe, both with kicker. Masaya may have gotten the better end of that deal, as he flushed Illuminate out of his opponent's hand. 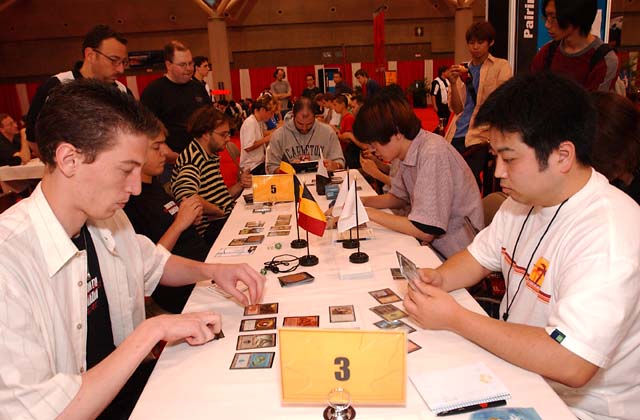 One of the surprising things in this match was how little regard Masaya held for his own Coalition Honor Guard. After taking clear control of the board by turn 13 with three flyers and a Guard, he elected to swing with the Guard, right into a pro-white Voice of All and Galina's Knight. He was bearing down hard on Peter's life total, and may have felt the sacrifice worth it to get the Tower Drake through for another two damage.

In game two, again the Guard took one for the team. Getting an early Shackles on it, Masaya elected to sack the Flagbearer (rather than Dream Thrush or Ardent Solder, which at least could untap) to Death Bomb Peter's Angel of Mercy. This allowed some Ardent Soldier beatdown in the mid-game, bringing Peter down to 5.

Again, the players traded discard: Bog Down and Probe, once more with kicker. Three or four creatures went to the graveyard during this exchange; but due to lack of blue mana, Peter found himself at a clear disadvantage on the board. Masaya felt comfortable using Dromar's Charm on Peter's Helionaut, so there was one less blocker for some final pushes.

On turn 13, Masaya swung with the Soldier, and then used Magma Burst, for which Peter had a Pollen Remedy. But with a Soldier out, Masaya could cast Jaded Response, and the Japanese won their only match.