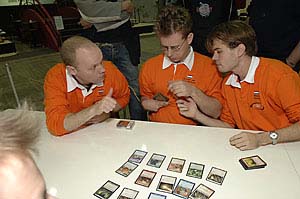 The Netherlands came dressed for success.

am picking Netherlands for being the most prepared team this year, mostly because their striking orange team shirts complete with names embroidered upon the breast. If you look snappy, you play snappy. Right now Douwe van Noordenburg is leading his teammates Bas Postema and Wessel Oomens to a potentially strong finish, as they sit in fourth place. Standing in their way in third place is Team Norway. Not nearly as coordinated in their costumes, but Nikolas Nygaard, Tommy Hammer and Eivind Nitter are still clearly on top of their game just five points behind Portugal for second place, and seven from Team USA in first.

The draft started out with a gut punch for the Netherlands, as Nitter opened and snapped up a Glare of Subdual from pack two, cementing himself as the Selesnya mage for Norway. Nygaard settled into Dimir with a touch of inter-clan cooperation from Golgari for one of their Rotwurms and a Vulturous Zombie. Hammer of course filled the team's obligatory Boros slot with an early Thundersong Trumpeter and many equally pint-sized friends.

On the other side of the table, Postema prepared to fight off Hammer's Boros hoards by splashing an early Cleansing Beam into his Dimir deck. Van Noordenburg was picking up Selesnya, and figured he could start splashing Sewerdregs to swim though Nygaard's Dimir/Golgari defenses. Oomens was literally screaming at his teammates (using only hand signals, of course) to leave him every possible card a Boros deck could muster to take on Nitter's Glaring Selesnya monstrosity.

As the draft progressed, Oomens picked up two Incite Hysteria, a Rain of Embers, a Leave no Trace, and a Cleansing Beam in the hope of neutralizing Nitter's potentially large army of Saprolings and their super-bomb enchantment. In retaliation, Nitter grabbed two Bathe in Light and two Caregivers in the hope of stopping Oomens' Radiance spells.

To round out the draft, Hammer picked up a Char through Oomens, who picked a Viashino Fangtail over the four-damage burn spell. Nygaard added a Hex to his pool, and Nitter was rewarded in the last pack with another Glare of Subdual.

Yes, another Glare of Subdual. If you wondered what that thumping noise was earlier, it was the head of Wessel Oomens swiftly becoming acquainted with the table.

Being the intrepid reporter I so obviously am, I took it upon myself to ask each team how they fancied their chances. Despite Nitter having double Glare and double Bathe in Light, the best Norway could estimate was 2-1 in their favor. Nygaard decided to leave his Hex in his sideboard to make room for three Last Gasps to match his opponent's three Sewerdregs, and Hammer rounded out his deck with two Greater Forgelings what were hopefully big enough to crush Postema's smaller Dimir creatures.

The Netherlands were much more confident of their impending victory, even though all Oomens could do during deck construction was grin and shake his head at Nitter's luck. Van Noordenburg seemed happy with his trio of Sewerdregs against a deck that played both Swamp-based guilds, and Postema decided to leave the Tunnel Vision half of his Tunnel Vision, Junktroller combo in the sideboard.

"On modo for sure, but not here. No way would I play it at Worlds," Bas rationalized.

I though about covering the match between Hammer and Postema, but both players had two Galvanic Arcs each, and I flinch when I see that card now. Kenji Tsumura crushed me with it on Day Two. I considered watching van Noordenburg play Nygaard, but Sewerdreg.dec vs. Last Gasp.dec didn't seem nearly as exciting as Nitter's Glares verses Oomens' fast Boros squad.

As they shuffled up, Wessel posed the question to Eivind, "Are you even any good anymore?"

Both players shared a laugh and a high-five as they presented their decks to each other. "How is Eivind feeling? If he loses, his teammates will kill him!" Oomens joked, eying his opponent for any sign of a chink in the emotional armor.

Nitter mulliganed a one-lander in Game 1, and it wasn't long before Oomens overran him with a Sell-Sword Brute, a Veteran Armorer and a Viashino Slasher, while his Loxodon Gatekeeper kept Nitter from getting any semblance of a defense up and running.

"I feel bad reaching for my sideboard," Oomens quipped. "No Glare, that has to be the most unlucky ever."

"My hand was not that good," returned Nitter.

"I couldn't play my spells and convoke, it slows me down too much," Nitter bemoaned, shaking his head and cursing Oomens' Rare Elephant.

"You don't have any right to complain about my rares!" laughed Oomens.

Nitter started out much stronger in Game 2 with another Caregiver, a turn-two Farseek and a turn-three Glare of Subdual.

"You have a Disenchant?" grinned Nitter.

Oomens attacked with his Veteran Armorer, and played out a Sell-Sword Brute. Nitter passed back the turn with five mana open, and Oomens slapped down a Faith's Fetters on the Glare.

"That's sort of a Disenchant," joked Oomens, as Nitter read the card.

"So what if it can't attack and block?!" Nitter laughed.

Oomens then craftily passed back the turn without attacking, correctly reading Nitter as having the Scatter the Seeds he then threw out at the end of the turn. Nitter untapped and passed the turn back again, now with six mana at his disposal. Oomens plays out his Cleansing Beam which earns a Bathe in Light from Nitter.

The Boros soldiers then swung in and had a good ol' punch-up with the Saprolings, who were unexpectedly aided by a Siren's Call. Nitter untapped and added a sole Caregiver to his field with a roll of his eyes and a "wooow!" Oomens swung back with a Skyknight Legionnaire, a Viashino Slasher and the Sparkmage Apprentice, and Nitter scooped up his cards showing eight land in play and two more in hand.

"Can you trade a Glare to me? I'll give you every rare I got. You sign it, I want a story to tell," Oomens laughed. 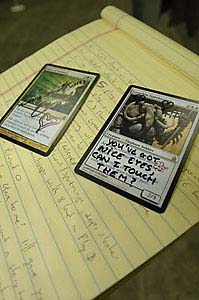 'Thanks for the memories…'

"Nooo!" Nitter cried, shaking his head "…have you got a pen?"

"Just put 'Kisses, Eivind' or something."

Meanwhile, Nikolas Nygaard defeated Douwe van Noordenburg 2-1 by using his Dimir Doppelganger to steal his opponent's deceased Sewerdregs and swampwalk through for three relentlessly, and Bas Postema and Tommy Hammer continued to fight it out with their Galvanic Arcs at the other end of the table.

As time marched on, they started their third game. Postema's Junktroller and Darkblast held off Hammer's Greater Forgelings and a lone Boros Swiftblade. Eventually, Postema drew the fifth mana he needed to Ribbons of Night away one of the Forgelings, and soon started swinging through the air with a Snapping Drake. It was not to be however, and they reached the end of the extra turns with Hammer sitting on a scant five life.

Netherlands and Norway earned a draw, making it that little bit harder for either team to catch Team USA, which has now leapt 11 points ahead of the competition.