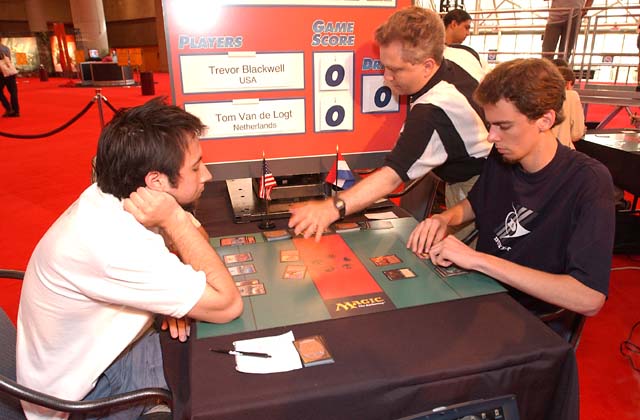 The Netherlands boasts one of the world's strongest Magic communities. Even before its national team had been determined, some people had them picked as the future World Champions. At the end of the individual portion of this years Worlds, they were twelve points up on their closest competitor, the resurging United States. Unfortunately for the Dutch, with thirty-six points up for grabs in each round of the team competition, that cushion isn't as big as it seems.

The "A" seat is traditionally the black-red seat in Invasion Block Team Rochester, and national champions Tom Van de Logt and Trevor Blackwell were happy to comply with that wisdom. Both splash blue for power cards like Jilt, but the overall quality of Blackwell's deck is superior. He just needs to watch out for Van de Logt's twin Magma Bursts, capable of turning a winning race into a lost game.

Blackwell was first onto the board with Raka Disciple and then Caldera Kavu. Fortunately for Van de Logt, his opponent was without black mana. A Quagmire Druid forced Blackwell to take to the air. When he missed his fourth land drop, Van de Logt risked a smile.

Grave Defiler didn't turn up any zombies for Van de Logt, instead shipping Nightscape Master and three land to the bottom of his library. Blackwell was happy to know Mr. Sunglasses wouldn't be showing up anytime soon. He took care of the Defiler with Fire, brawled, and made a Thunderscape Familiar.

Van de Logt tried to move ahead in the race with a kicked Pouncing Kavu, swinging for five. Blackwell hit back, played a swamp, and made a Mire Kavu, his army now dwarfing that of the Dutchman. Van de Logt turned the beat around, kicking up a Magma Burst that left Blackwell with two paltry 1/1's.

However, Blackwell didn't get to be U.S. National Champion on his winning smile alone. He untapped, counterattacked, then frustrated Van de Logt's attack with a kicked Jilt, destroying the Druid and sending the Kavu home.

Van de Logt replayed his beast and passed the turn. Blackwell Recoiled it to push through two more damage, dropping Van de Logt to five. Van de Logt decided to shift gears, playing out Shivan Zombie and Caldera Kavu. Blackwell made a Pouncing Kavu of his own and turned it sideways. 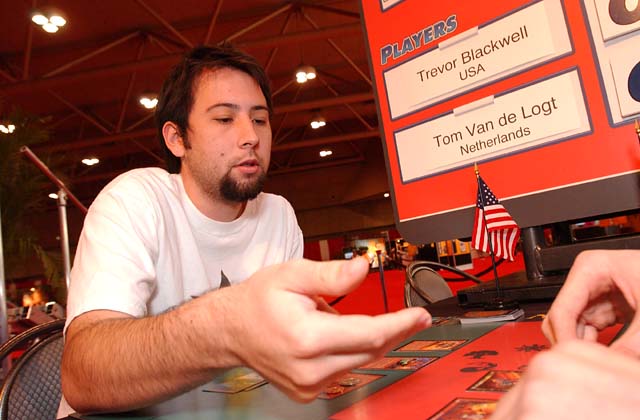 Van de Logt missed the first strike ability on the Kavu, and went for the double-block. The result was only a disaster for Van de Logt's ego, as letting the beast through would put him at two life, and have it sail over his blockers on the next attack for the win.

Regardless, his situation was precarious. He kicked up his Pouncing Kavu and held back. The opposing one flew in for three, and was joined by a kicked Duskwalker, an almost audible death knell. Van de Logt made a game of it, knocking Blackwell to five and bringing out a Phyrexian Slayer to block. Blackwell secured the win with Minotaur Illusionist.

Van de Logt gave Blackwell the lead-off in game two, and trumped his turn-two Thunderscape Familiar with Razorfin Hunter. He added Hooded Kavu to his board, and swung when Blackwell had no fourth-turn play. He kept up the pressure, Recoiling Blackwell's Minotaur Illusionist and dropping Caldera Kavu.

Blackwell again tapped out for his monstrous blocker. Van de Logt's ample mana let him sneak past the Hooded Kavu and threaten death from the Caldera Kavu. Blackwell took six. He decided it was time for him to shine, so he removed the Hunter with Cursed Flesh and Jilted away Van de Logt's board.

Van de Logt replayed his Hooded Kavu and passed the turn. He took beats from the Illusionist, returned fire, and made a Nightscape Master. Blackwell continued to ride his momentum, Strafing the Master and adding a Phyrexian Bloodstock to his team.

Things were not looking good for Van de Logt. He held back and could only kick up an unimpressive Kavu Aggressor. At least Blackwell had no cards in hand.

Blackwell's attack knocked Van de Logt to seven. He played the Ancient Kavu he had just drawn. Van de Logt was undaunted. He ran his Aggressor into it. He added a Firescreamer to handle the Illusionist. It came in next turn, and the resulting two-for one left Van de Logt's board empty. He played Battleflies and eyed Blackwell's five life.

Blackwell came in with the Bloodstock and passed the turn. Van de Logt played Grave Defiler, and came up roses with Quagmire Druid and Shivan Zombie. Blackwell couldn't believe his fortune. He brought out the Zombie and attacked for one in the air. Blackwell drew and handed it back. 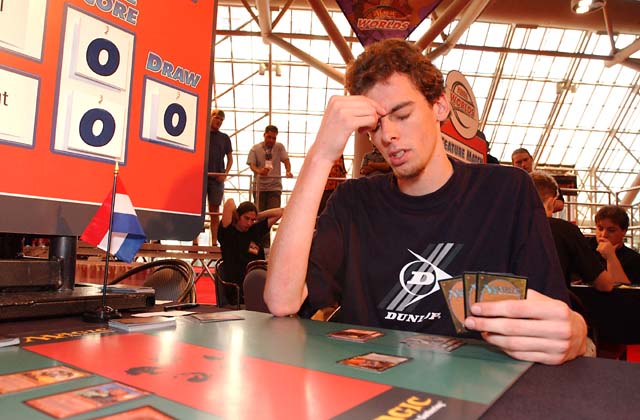 Van de Logt picked up his top card and immediately started smiling. Double-checking that Blackwell's Jilt was in the graveyard, he kicked up a Pouncing Kavu and swarmed in for the kill.

Blackwell had his Thunderscape Familiar on turn two again in game three, and Van de Logt took it down with Singe. Unfortunately for him, Blackwell had Viashino Grappler in the wings. It hit for three and was joined by Mire Kavu before Van de Logt was even on the board.

In desperation, he kicked up a Magma Burst, leaving him with just an island and mountain. Blackwell came down with another Grappler. When Van de Logt missed his next land drop and failed to produce a blocker, Blackwell practically climbed over the table to beat him up himself. He resigned himself to a 4/5 Emblazoned Golem.

Van de Logt's Quagmire was Recoiled. Things were beyond grim. He replayed it only to watch Blackwell bounce it with Crosis's Charm. Blackwell was quick to credit his victory to his outrageous draw.