This is something of a historic match just by virtue of existing. The first text feature match of the first round of the very first World Magic Cup could one day be a trivia question thrown out by Mark Rosewater during one of his many trivia segments.

The answer to that question will now and forever more be Hall of Famer Raphael Levy versus Brazilian stalwart Juliano Souza. As to the answer to the question of who wins that first match... well, that's what we're here to find out. 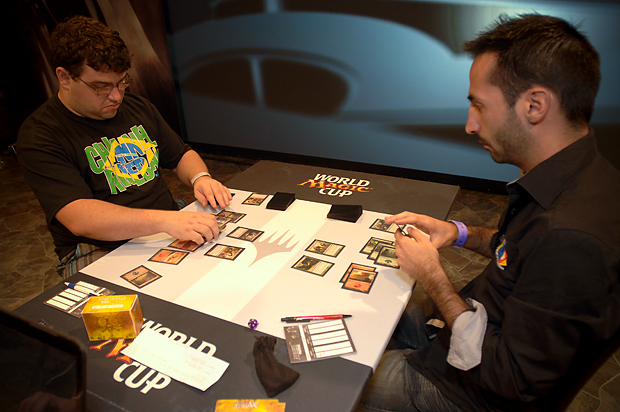 Juliano Souza and Raphael Levy square off in the first round of the first World Magic Cup.

Juliano Souza might not be a recognizable name outside of Brazil, but that's exactly what the World Magic Cup is all about. Despite the gap between Levy and Souza in lifetime Pro Points (for that matter, the gap between Levy and anyone in lifetime Pro Points), Souza might actually have more high-level experience with Magic 2013 Limited than any other player in the room, having finished 9th on tiebreakers at Grand Prix Sao Paolo last month.

Souza is a very well-respected player in Brazil, is widely considered one of the country's best players, and he rightfully finds himself under the spotlight this weekend after qualifying through a World Magic Cup Qualifier. If the Brazilian team, captained by Paulo Vitor Damo da Rosa, is going to make some noise this weekend, Souza is going to be a key part of the team's success.

Levy represents the other fantastic feature of the World Magic Cup qualifying process. Previously, a country's best players could be left off the national team if they didn't finish high enough in the national tournament. But with each country's top pro automatically qualified, stars like Levy will always get to shine in Magic's most prestigious team tournament.

Levy was sporting a quick red-green deck with large, efficient creatures backed by a few burn spells, while Souza had a pretty saucy black-red deck with considerable removal and a few bombs that could make this match a quick affair. One way or another, we'd have the answer to that trivia question relatively quickly.

A mulligan to six didn't keep Levy from striking first with a Timberpack Wolf, although it was quickly trumped by a Giant Scorpion out of Souza's black-red deck. When Levy went bigger with a Spiked Baloth, Souza kept pace with Liliana's Shade to further complicate the board.

The Baloth crashed in on the next turn, trading with the Scorpion, but Souza simply cast a second copy of the prickly 1/3.

That was when Levy started flashing his long-game plan. Roaring Primadox was followed by Garruk's Packleader, threatening to give Levy a draw engine that could put him in the driver's seat if allowed to remain unchecked.

At least that was the plan. Souza, though, was ready. He Murdered the Packleader and, to make matters worse for Levy—who now had to bounce his own Primadox—Souza even reanimated the treacherous Garruk's Packleader with Rise from the Grave before adding a Bloodhunter Bat to his side of the board.

Yet Levy wasn't finished by any means. He recast his Timberpack Wolf and a Goblin Arsonist, then used Prey Upon to clear out Liliana's Shade while Souza was tapped out. That let him recast the Primadox the next turn as well, and follow it up with Deadly Recluse. 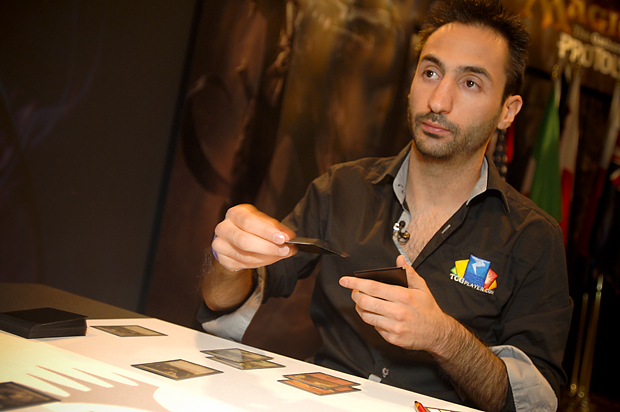 Team France Captain Raphael Levy is no stranger to the spotlight, but he was quickly put under pressure in Round 1.

Souza got aggressive, attacking the Packleader and Bloodhunter Bat into Levy's team, earning respective blocks from the Roaring Primadox and Deadly Recluse. Public Execution on the Wolf made combat very favorable for Souza, but Titanic Growth kept the Deadly Recluse alive to trade with the Packleader the following turn.

Souza reloaded with Sign in Blood, which found a Liliana's Shade and a Krenko's Command—which Levy graciously supplied two of his own pro player cards to use as tokens—leading to the awkward situation of Raphael Levy attacking Raphael Levy.

With all of the mana at his disposal and no resistance from Levy, all it took was two attacks with Liliana's Shade before a lethal Volcanic Geyser put Souza up a game on the Hall of Famer.

Levy was first on the board again this game, literally and figuratively, as his Krenko's Command put two Raphael Levy pro player cards on the board. He continued his parade of 1/1s with an Elvish Visionary and followed up with a Timberpack Wolf and Deadly Recluse to complete his motley menagerie of tiny creatures.

Souza found some defense in a Duty-Bound Dead, fine against a group of 1-power creatures, and began going through his deck with Rummaging Goblin.

Curiously, despite discarding a Crippling Blight with the Goblin, Souza had no plays on his fourth turn other than regenerating his Duty-Bound Dead as it blocked Timberpack Wolf.

A Bloodhunter Bat made a temporary stop on the battlefield before falling to Titanic Growth on a block, but Souza's previous lack of plays on turn four suddenly made sense as he flashed his trump: Magmaquake. 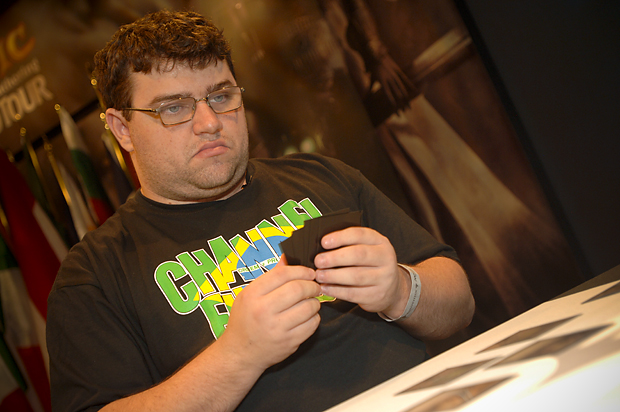 Juliano Souza fell just short in M13 Limited at Grand Prix Sao Paulo, but his strong black-red deck looked to give him a leg up today.

A 'quake for 3 cleared the board, leaving Souza free and clear at 12 life and a grip full of action. A pair of Liliana's Shades, Sign in Blood, Torch Fiend, and a second Rummaging Goblin came after the Magmaquake, as Souza was clearly sandbagging prior to the sweeper.

Levy, however, hadn't been holding back and found himself only able to make a Spiked Baloth after the ground had been so thoroughly shaken.

However, with Souza at 10, that might be enough. The Baloth took to the air with a Kitesail, conveniently now with 5 power, and suddenly Levy had lethal on the board.

Souza attacked back for 8 damage, putting Levy to 4 life, and left six lands untapped to face down the flying Spiked Baloth.

"Hm, I wonder what's going to happen," Levy said as he attacked into the open mana, receiving the Public Execution he expected.

With no creatures facing down his opponent's four beaters, things looked grim for Levy until he laid his long-awaited fifth land and cast Chandra's Fury.

With no open Swamps, the red burn spell—which has been getting a lot of press as one of the gems of M13—cleared out Souza's board and dropped the Brazilian to just 1 life.

But Levy himself was on just 4 life, exactly enough for Souza's very own Chandra's Fury, quickly ending what looked like a comeback story in the making.

After the game, Levy revealed that he had had the Chandra's Fury a turn earlier and could have wiped the board one turn sooner if he had drawn a fifth land. Instead, he said, flashing his hand, he had drawn his deck's only other five-drop.