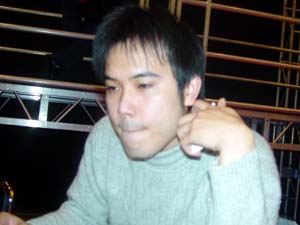 Osamu Fujita has become one of Japan's best known Magic players, for both his talent and his second place curse. Nicknamed "The Silver Collector", Fujita has a massive collection of finalist appearances, but has never been able to take home the gold. At January's Pro Tour Amsterdam, he added the biggest achievement to his competitive Magic career, with an appropriate second place finish. This weekend he's hoping for a change of fortunes, and he's certainly a prime candidate to become the first Japanese Pro Tour Champion. His opponent, Dirk Baberowski, hasn't had many problems winning Pro Tours, with three championship trophies on his mantle.

Fujita mulliganed down to six. He played nothing but mountains for the first three turns, while Baberowski accelerated with a Talisman and Soldevi Simulacrum. Fujita played Damping Matrix, and sacrificed it in short order to kill Baberowski's newly made Arc-Slogger. Baberowski summoned Furnace Dragon soon after, and Fujita used Pulse of the Forge to stay in the game. Shrapnel Blast took care of the Dragon, and Pulse of the Forge brought Baberowski down to eight. Fujita had a second copy, and the game was over. 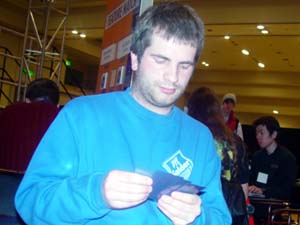 Fujita used Molten Rain to take out one of Baberowski's lands, and cast Detonate to destroy another. He played Soldevi Simulacrum, and the land destruction was taking its toll, as Baberowski was stuck at three mana sources. He found a fourth and brought out a Simulacrum of his own, which quickly died to Fujita's Arc-Slogger. Pulse of the Forge brought Baberowski down to six, where Arc-Slogger was able to do the rest.