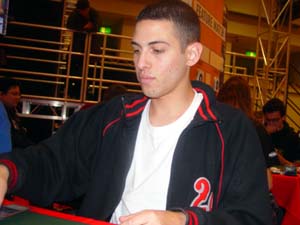 Niemenan wore the expression of a man who couldn't help but feel he was making a mistake. He was shuffling up a mono-black Death Cloud deck, but it seemed like his heart wasn't in it. His opponent, Ben Stark, was his usual bundle of nervous energy. He was playing Affinity.

Stark won the roll and led with Vault of Whispers and Ornithopter. He answered Niemenan's swamp with a Seat of the Synod, Arcbound Ravager and Frogmite. Niemenan made another swamp and a Talisman. Stark had barely begun. He untapped, played Glimmervoid, Skullclamp, then a one-mana Enforcer and a free one. He Clamped up his Ornithopter and ate it for cards, then swung in for five after eating a land.

Niemenan dropped Barter in Blood. Stark was left with his two Enforcers, one 7/7. He showed Niemenan another Ravager and enough artifacts to take the win that turn. 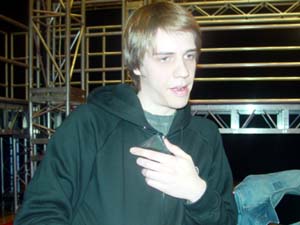 Niemenan had the advantage of going first in the second game, but Stark was ready to stunt his growth with Oxidize on a Talisman. Then the usual Affinity explosiveness showed itself, this time with Disciple of the Vault. Niemenan's Promise of Power made him a 4/4 flier, but again Stark had the Arcbound Ravager to take the game immediately.

"I picked the wrong deck this weekend. I have no way to deal with the Ravager."