Round 2: Akihiro Kashima vs. Tsuyoshi Fujita 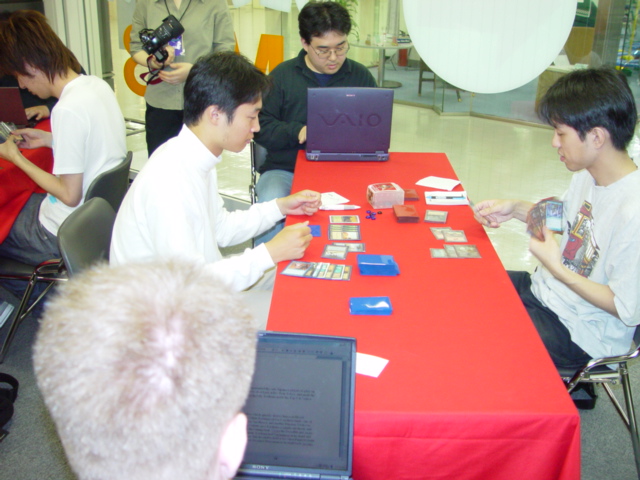 Prior to a few weeks ago, these two men represented the only Japanese players to play on a Pro Tour Top 8 stage. Fujita was the first to do it back at Pro Tour Tokyo, and made his way to the finals before losing to Zvi Mowshowitz. Kashima made his Top 8 at Venice this season, and seemingly came out of nowhere to do it. Here we have a classic matchup between an established star in Fujita, and someone who simply burst on the scene in Kashima. Fujita is looking to build on his reputation, while Kashima wants to establish his and prove that Venice was not a fluke. Fujita is playing Reanimator, while Kashima has green/blue/white.

Kashima started off with Birds of Paradise, which quickly died to Innocent Blood. Burning Wish searched for Buried Alive, while Kashima sat back on three lands, one of which was an island. Birds of Paradise was Smothered, and another Burning Wish was countered with Circular Logic. Phantom Centaur gave Kashima a significant threat, and Fujita cast Buried Alive, getting Arcanis the Omnipotent, Visara the Dreadful and Anger. Innocent Blood followed, killing the Centaur. Kashima had Unsummon in his hand and thought about bouncing his 5/3 in response, but decided to hold it for when Fujita brought a creature back from the graveyard. Indeed, Doomed Necromancer brought back Arcanis, and it was Unsummoned, but not before Fujita got to draw three cards. Zombify brought Visara into play, and yet another Burning Wish got Cabal Therapy. It was used to name Upheaval, and sure enough it was sitting in Kashima’s hand. Interestingly, Kashima had the mana to cast it, but no threats to follow. He could have reset the board to remedy the Visara problem and would have been ahead with the first land, but instead decided to see if he could draw a threat. As is, the reset button headed to the graveyard, and Visara finished the rest.

Fujita mulliganed his opening hand. Kashima’s first turn Birds was followed by a second turn Compost, which was definitely bad news. Smother killed the Birds, and Kashima drew a card to replace it. Wild Mongrel followed, and Fujita cast Buried Alive to get Arcanis, Anger and Phantom Nishoba. Visara wasn’t a great option, since it would have given Kashima yet another card. Anurid Brushhopper provided some more pressure on the ground, while Fujita cycled Barren Moor and ended his turn. Kashima played a second Compost and Fujita responded with Smother on the Brushhopper, which resolved. Innocent Blood killed the Mongrel, and Stitch Together brought back Arcanis. Kashima had Unsummon, but Fujita drew three cards in response to gain back a little bit of the card advantage lost to the Composts. Regardless, Kashima was too far ahead, and had plenty of threats along with the spells to protect them. He summoned Aquamoeba and Wild Mongrel, attacked for three damage on the following turn, and Phantom Centaur joined the team. Without any other options Burning Wish got Zombify, and Fujita cringed a bit as he cast it. Sure enough, Kashima had Circular Logic, and it was off to game three.

Kashima mulliganed down to six. Fujita’s Duress took away his Circular Logic, leaving Merfolk Looter, Brushhopper and lands. Cabal Therapy stripped the Looter as well, leaving Kashima with very few resources. Anurid Brushhopper provided a solid yet unspectacular lone threat, while Fujita Entombed Arcanis. The Brushhopper attacked for three and was joined by Wild Mongrel, giving Kashima a much better clock. Fujita simply drew, played a third land and ended his turn. Smother killed Wild Mongrel on Kashima’s attack, and Deep Analysis was cast to draw into more threats. It was flashed back on Kashima’s next turn, and another Mongrel was summoned. Duress revealed two Unsummons and Deep Analysis, which was discarded. Fujita summoned Doomed Necromancer and ended his turn. Kashima’s team attacked for five and Compost put him further ahead, while Unsummon prevented the Necromancer from becoming active. Fujita conceded soon after.

1 Arcanis the Omnipotent 1 Visara the Dreadful