Round 2: Alan Comer vs. Olivier Ruel 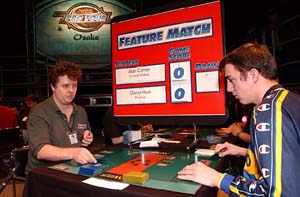 Alan Comer, one of Magic's foremost Mad Geniuses, is looking more reserved than usual this weekend. His ordinarily tempestuous hairstyle has been hemmed in, and he wears a look of grim determination only sometimes broken by his trademark goofy grin. After winning his first round, he squares off against France's affable roue, Olivier Ruel. Ruel has brought mono-black to the table, while Comer is with green-blue Compulsion. Though Comer is too humble to say so himself, he will soon be seen on the front page of Sideboard.com with a weekly Deck Clinic column.

Olivier won the coin flip and chose to play. He started strong, with a belated turn-three Nantuko Shade against Comer's board of Compulsion. It hit for six while Comer dug for answers. His Compulsion put two Basking Rootwallas into play, but he chose to let another attack of the Shade through. Cabal Coffers meant it hit for eight. 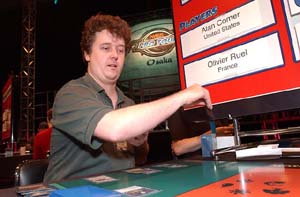 At six life, Comer didn't have a lot of room to maneuver. He chumped the Shade, and prevented a Chainer's Edict with Circular Logic. He made a Mongrel and on Ruel's next attack busted out a surprise Arrogant Wurm, attempting to take down the Shade. Ruel just shrugged and showed Comer Laquatus's Champion.

Ruel had no turn-two play again in the second game, but Comer's incredible opening hand failed to pay dividends when a turn-three Careful Study turned up no land. Ruel almost felt bad destroying his island with Rancid Earth. 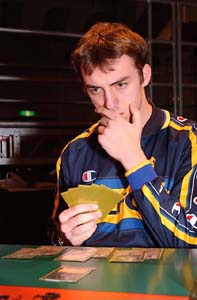 While Comer continued to draw non-land cards, Ruel hit five swamps and cast Mind Sludge. "Only five? You mean I get to keep some of these cards?", asked Comer in mock-joy. Even that dissipated when Ruel Sludged again.