Round 2: Alexander Witt vs. Alex Shvartsman 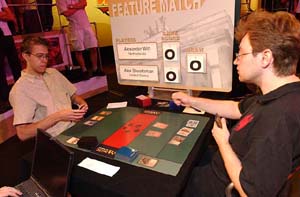 Alexander Witt is best known for grinding into the Masters at Nice last year, and winning the whole thing. Today he's playing Wake, which is the deck of choice for the Dutch in Standard this week. Alex Shvartsman is a Pro Tour veteran, with more success on the Grand Prix circuit than any other player in history. He's running a Sligh deck designed by Seth Burn dubbed "The Red Army". It's a Goblin deck built for pure aggression, and utilizes Burning Wish for utility and disruption.

Shvartsman had a second turn Goblin Piledriver, followed by a Warchief and an attack for five damage. Witt had cycled Renewed Faith, and sacrificed Krosan Verge to accelerate a bit. Wrath of God killed the two Goblins, and Shvartsman came right back with another Warchief and a Sledder, dealing three points of damage. On the following turn, Burning Wish searched out Cabal Therapy. Shvartsman cast it, and in response Witt cycled Decree of Justice to make three 1/1's. The Therapy named Mirari's Wake, and Witt's hand was revealed to contain nothing but another Decree and lands. Goblin Grappler hit play, and attacked along with the rest of the team. Three Soldier tokens teamed up on the Warchief, which took down two of them. 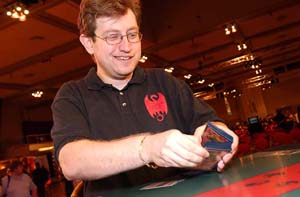 After the attack, Goblin Grappler was sacrificed to flash back the Therapy, taking out the Decree in Witt's hand. A cycled Gempalm Incinerator handled the remaining token to clear the way for an attack, and Skirk Prospector added a little more pressure. The two 1/1 Goblins attacked for two points every turn, as Witt drew nothing but lands and Mana Leaks. Eventually he drew Compulsion, and got to work cycling away the excess lands in his hand during his turn, looking for something that would help him stabilize. With Witt's blue tapped out, Shvartsman was able to resolve Siege-Gang Commander, and deal the final points of damage.

Shvartsman started off with a Prospector, and a Piledriver was Mana Leaked. Burning Wish once again got Cabal Therapy and it was cast, naming Wrath of God. Witt's hand had three islands, Compulsion, and Transcendence.

Shvartsman- "I'm going to read that for a while." 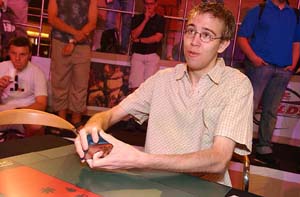 The Prospector was sacrificed to flash back Therapy, taking away Compulsion. A Warchief resolved on the following turn, attacking for two points of damage. A Sledder and Sharpshooter came out a turn later, and Witt cycled Decree of Justice after Shvartsman's attack. Before blockers, the Sharpshooter took down every 1/1 token. Compulsion gave Witt a little more to work with, but Shvartsman kept the pressure on, summoning Siege-Gang Commander. The following attack would have been brutal, if not for Moment's Peace.

Witt now had a little more time, but would need to stabilize soon. Even at a relatively health thirteen life points, he was staring down an intimidating Goblin army, along with a Commander that could throw them all at his head. Another Moment's Peace was cycled, and on Witt's end step, Shvartsman "went off". He shot Witt with the Sharpshooter, sacrificed a goblin to the Commander, and repeated the process once more. He then untapped, and attacked to force Witt to tap out for a flashed back Moment's Peace. This cleared the way for the Sharpshooter and Commander to do the rest, without any fear of life gain.