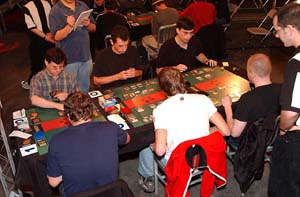 Five of the six players in this match are known quantities. Every member of the Ancient Kavus has a Grand Prix title under their belt, two members of Team Outland have won Euros, three players have won coveted seats at the Invitational, and Mike Pustilnik is the only player other than Kai Budde to have won a Pro Tour, a Grand Prix, and a Masters!

Which all begs the question...

Who the heck is Lovre Crnobori?

According to Nicolai he is the player ultimately responsible for the Go-Mar deck from one Block Constructed season ago and has played in a number of Pro Tours. He has yet to finish anywhere worthy of note but both Eivind and Nicolai are expecting big things from him--otherwise they would not have let him fill the shoes of Bjorn Jocumsen who could not play due to work and fiancée commitments.

I decided to watch the unknown Norwegian as he attempted to take down one of the games most popular figures Mike "Doctor P" Pustilnik. Both players are playing Green/Red decks with a lot of burn. Mike has Shower of Coals, Flame Burst, Fiery Temper and Lava Dart. Lovre also has Fiery Temper and Flame Burst but he can back it up with Kamahl, Pit Fighter and Liquid Fire.

Lovre elected to play first and came roaring out of the gate with a Diligent Farmhand which Mike Darted during his the bottom half of the turn. Nothing else happened until the fourth turn when Lovre played a Krosan Archer and Mike missed a land drop—to make matters worse he had only red mana sources, two mountains and a Ravaged Highlands.

Lovre started swinging with his Archer and added a Seton Scout. Mike only missed one land drop but was still hurting for a Forest.

Lovre kept playing land and attacked Mike down to 14 but had no other creatures to add to his army. There was nothing in his hand but removal! Mike was forced to use his Shower of Coals to kill the Seton Scout and do two to Lovre and he wasn't happy about it. He was holding two Nullmage Advocates while being attacked by a 2/3 creature very turn. His life was whittled to 12 when he decided to sacrifice the Highlands to play a Nullmage that was Thermal Blasted EOT.

Mike never drew the forest and the Krosan Archer got Mike to 4 when a Firebolt put him out of his misery. 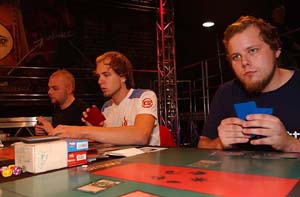 Gary and Nicolai were playing U/W vs. U/B respectively. Nicolai double mulliganed in Game 1 and Gary was up a game fairly quickly.

Matt and Eivind were playing the same match-up but the roles were reversed with the Ancient Kavu playing the U/B cards. Game 1 was looking very good for Matt with a Skywing Aven holding off a Phantom Flock. After his Cephalid Looter madnessed a Strength of Lunacy onto the flier's back things were looking very bright indeed. In fact the Looter was doing Yeoman's work as it allowed him to madness a Circular Logic that sent Phantom Nishoba to the bin instead of his dome.

But the game seemed to slip away from Matt when Eivind played a series of rare bombs that resolved. First a Divine Sacrament made all of Matt's attacks very unattractive and forced him to put multiple threats out in order to get through. Then Vengeful Dreams killed Frightcrawler, Balshan Collaborator, and another guy and it wasn't long before they went on to Game 2 with matt muttering to himself about the one that got away.

Both players kept their opening grip and Mike played a Liberated Dwarf in the top half of the first turn and nothing else happened until Mike played a third turn Leaf Dancer which was Fiery Tempered during Lovre's third turn. Mike bounced back with an Anurid Barkripper. Lovre debated Brawn vs. Acorn Harvest during the bottom of the fourth turn and decided to play the 3/3.

Now it was Mike's turn to cast a main phase Fiery Temper and he attacked Lovre down to 14. There was still no time for Acorn Harvest as Lovre played a Gorilla Titan.

Mike swung the Barkripper into the Titan but Lovre wasn't biting and went to 12. Mike was holding Engulfing Flames and Flame Burst and passed the turn back to Lovre. Mike's life dropped to 16 as the Gorilla cracked back and Lovre added a Phantom Tiger which died EOT thanks to Engulfing Flames + Engulfing Flames w/ flashback.

Mike was holding only a Flameburst at this point and needed to draw an answer to the Titan...

He drew Genesis and played it. He also took Lovre down to 11. Lovre finally found a turn to cast Acorn Harvest and did so. He chose not to attack.

Mike had nothing in hand at this point—literally and figuratively and he pulled an Arcane Teachings off of the top of his deck. He enchanted the 1/1 and swung with both of his creatures. Krosan Archer stood in the path of Genesis and the players put damage on the stack. Before damage resolved, Lovre had to decide what he wanted to discard to save his Archer. He was holding Worldgorger Dragon, Liquid Fire and Krosan Avenger. The Avenger hit the bricks and a Lava Dart killed the Archer. Lovre ripped a Phantom Centaur off the top. He sent a lone Squirrel into the red zone and took Mike down to 13 and then played the Centaur.

Mike was out of his own rips for the time being and peeled an underwhelming Mountain and passed the turn. Lovre drew and played another Krosan Archer. Mike pinged the Centaur EOT.

Mike got back to the business of ripping good cards and drew a Muscle Burst. The Dwarf pinged the Centaur down a notch and Lava Dart was flashed back to clear the way for Genesis which dined on another squirrel. Lovre drew his sixth land and cast Liquid Fire... 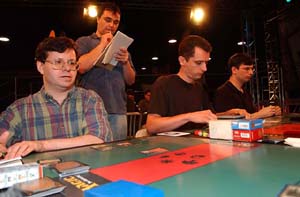 There was some confusion about when targets were chosen for Liquid Fire at this point—upon announcement or resolution. Head Judge Nat Fairbanks explained that targets were chosen upon announcement but the damage was split up between the player and the creature upon resolution. Lovre turned his aim toward the Dwarf but Mike Muscle Burst it and Lovre sent all 5 points of damage at his opponent instead, reducing Mike's life to 8.

Mike ripped yet another card in Sylvan Might, which was enough to force through the win.

Unfortunately for the Kavu, things were not going to well for Mike's teammates. In the second game against Matt, Eivind went straight to seven mana and made a Phantom Nishoba. When it grew a pair of Ghostly Wings on the next turn the game was all but over.

As quickly as Gary had won Game 1, after Nicolai's double mulligan, he dropped the next two.

Mike Game 3 was now meaningless except for tiebreakers. This can be one of the most frustrating aspects of providing coverage for a team event. In the end, Mike lost the third game in uspectacular fashion and the Ancient Kavu were swept by Team Outland 3-0.