Round 2: Andrew Pacifico vs. Jon Becker. 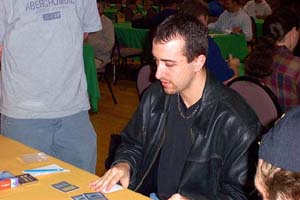 Andrew PacificoJon Becker, former council for Tongo Nation faced off against Floridian Andrew Pacifico, who, way back in 1998 won the JSS Championships and made Top 8 at the U.S. Nationals.

Both of these players were having some fun while playing, and the banter was crisp and friendly between them. "This is going to be on the Sideboard?" Pacifico queried, "Oh man!"
"This isn't going to be very long, Kurtis...my deck is very bad" commented Becker when sitting down. "My deck is like 96 colors."

Regardless of how many colors Becker was playing, he certainly drew all the land he could handle in Game 1. Playing first, Becker played a Skywing Aven on turn three. Pacifico cast a Last Rites for three, but sighed when seeing Becker's hand; a Pilgrim of Justice and five lands.

The game was Becker's Aven; never leaving the table for more than a single turn, the Aven pounded relentlessly at Pacifico, and with the help of a Strength of Isolation (+1/+2 and pro: black) the Aven soared over Pacifico's ground force. While trying valiantly to keep up, Pacifico, the local, summoned Gravedigger, Carrion Wurm, Teroh's Faithful, and a Zealot.
Becker played patiently, letting the now three-power Aven do most of his work, as he sat accumulating cards for his Sickening Dreams. 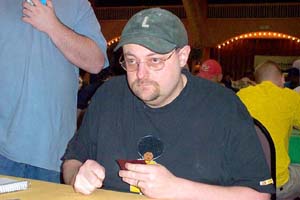 Jon Becker After casting the Dreams for four, the game was over quickly with Becker showing his bomb, Wayward Angel on his final turn.

Game 2 Pacifico chose to draw again, and Becker was fast and furious with a Mystic Familiar followed with a Seton's Desire. Pacifico took a long time getting going again, but hit drops consecutively with Fledgling Imp, Mystic Zealot, and Aven Flock.
The little familiar that could kept going to work on Pacifico however, and, while he touted his deck to be bad, Becker made a Gurzigost on his sixth turn.
After activating his ability on his upkeep, Becker was able to pay for Gurzigost (putting two cards from his graveyard to the bottom of his library) and swing in for the quick win.

Looking at the deck lists, Pacifico appears to have the edge with his cards showing more quality. However, Becker drew his bombs and ultimately won the match while Pacifico's slower deck took too much time to catch up.