Round 2: Ben Seck vs. John Werner 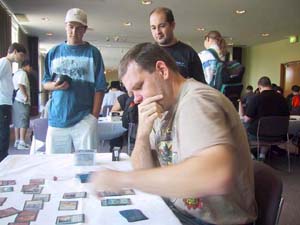 Both competitors have got off to the perfect start, with Seck's slightly crazy deck giving him a hard fought win in the first round. Werner has come away from the draft with a slow U/W deck, heavy on stall and flying evasion that could prove to be a problem for Seck. After winning the die roll Werner elected to play first.

Werner got off to a flying start with a first turn Confessor, which was met by a turn two Mad Dog from Seck. A Thought Eater entered play on Werner's side however it never got the chance to attack because it was Firebolted on Seck's next turn, and with the coast now clear in charged the Mad Dog. On his forth turn Werner began stabilising the board with a Luminous Guardian and then followed it up with a Mystic familiar and a Hallowed Healer. Seck managed to continue to push through damage with the Dog by summoning a Mystic Zealot, and helped his position by flashing back Firebolt from the graveyard to remove the Healer before he could come online. Werner then summoned a Graceful Antelope and set about converting all of Seck's Mountains into Plains, but could draw nothing to help ease the pressure that was mounting. The top of Seck's deck continued to provide creatures for him to summon with Balthor, Dwarven Strike Force and Teroh's Faithful all joining the Red Zone team on Seck's side. After drawing nothing but islands for the next three turns Werner was forced to concede the game. 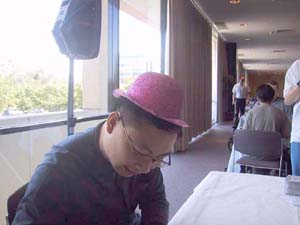 Things looked grim for Werner when he was forced to take a mulligan to begin the game, but he was still able to come out firing with a turn two Mystic Familiar and turn three Militant Monk. Seck started his Game 2 with the familiar second turn play of Mad Dog and had an answer on turn three for the monk before it could become active, sacrificing a freshly cast Searing Club to remove it and clear the path for his Dog. Werner played the Graceful Antelope on turn four and it looked as though it could cause a lot of problems for Seck as his second turn Plains gave it the perfect opportunity to lock him out of the game for good. The two then traded blows with Werner sending in his Familiar and Antelope and Seck sending in his Mad Dog, and once it was Werner that looked to stabilise the board with Luminous Guardian. Seck summoned a Teroh's Vanguard at the end of the turn, which would allow his creatures to continue to deal damage to Werner as he raced against the Plain converting Antelope. Werner played his first Island of the game and summoned a Cephalid Scout which would allow him to attempt to gain some sort of card advantage from the large amount of land that he was drawing in this game. Attempting to create a game winning advantage Seck slammed down a Dwarven Strike Force and then Firebolted the antelope twice with flashback with his last two mountains. With his life slowly bleeding away to the Mad Dog Werner sacrificed land after land searching desperately for something that would help him turn the tides of war, and he found it in an Aven Flock. No longer able to attack Seck sat back and watched as it was his turn to have his life pecked away by a small airforce. Werner added Escape Artist to his board while Seck added Ember Beast and Skywing Aven, but it looked as though it would be impossible for him to press through for those last 6 life points that was keeping him from a match win. Werner hit threshold by sacrificing more land to his Scout and sent in another attack to bring Seck down to a tiny 4 life. Seck simply surveyed the board, checked his graveyard, looked at the board again and announced a last ditch attack at Werner, however he had a trick up his sleeve. Before Werner could declare his blockers he cast Demoralise, pitching the cards left in his hand to return his Skywing Aven, giving him threshold and allowing him to crash over for the win. So despite drafting what looked to be a terrible R/W deck Seck could go all the way to a 3-0 record.