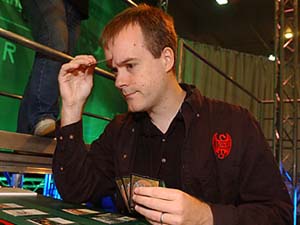 Ellis celebrated his birthday at the Pro Tour.

just turned 38, Chad Ellis is one of the "old men" of the Pro Tour now. He is what we refer to over here as an OBG, an oldie but a goodie. As one of the only Your Move Games players here, he is representing with the traditional red dragon shirt. His opponent, Itaru Ishida, doesn't hold the age advantage, but holds huge amounts of experience on the Pro Tour, being eligible for the Hall of Fame vote next season and having had a Top 8 at Pro Tour-Seattle, along with countless Grand Prix Top 8s to his name -- including a win this season in Singapore.

After Gadiel Szleifer took back Sunday in Philadelphia for the USA, here Ishida will be hoping to reassert Japan's incredible dominance in top-level Magic in the last couple of seasons, alongside many of his Japanese peers. Chad is out to stop him.

On the play, Chad had to mulligan, which was compounded by a Psychic Spear with an abundance of targets from Ishida. Shinen of Life's Roar went as did Chad's options. A Kabuto Moth from Ellis was the first real threat on either side of the board as each man loaded up on smaller creatures, jockeying for position. It was quickly trumped by Teller of Tales for Itaru though, who maintained a quiet confidence in the battle of the common fliers.

Stuck on three land, Chad fought out of his corner hitting the red zone with Kashi Tribe Decoy and Promised Kannushi. Ishida's air force remained one step ahead of Ellis' army though, as Shinen of Flight's Wings joined his team. Kashi Tribe Decoy took the new recruit down with the help of Shuko and the moth, but massively behind in land, Ellis appeared to be in a spot of bother.

When Death Denied allowed Ishida to reload following a busy attack step from Ellis, the game looked virtually over barring some tricks from the man with a dragon on his back. Kashi Tribe Decoy was perfectly reasonable at keeping Ishida's board from reaching critical mass, but the Teller always remained, with his relentless assault on Chad's life total.

A Sosuke's Summons followed up by Sakura Tribe Scout was strong from Chad, but not strong enough in the face of Itaru's board, who flew in for the victory. 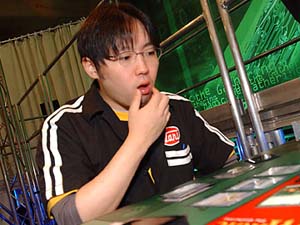 With the play in Game 2, Ellis was again forced to ship his hand.

"This is not the guy you want to be mulliganing against," he remarked with a wry smile.

Ishida's poker face remained and he continued with his game plan, and indeed his initial seven.

The first creature on the board was a hard-cast Mistblade Shinobi from the Japanese player, which elicited a smile from Ellis, whose Kashi Tribe Decoy with a Shuko seemed ideally suited to dealing with the ninja. A second ninja popped out to bounce the snake when Ellis allowed a blue Zubera through, netting Ishida valuable tempo.

Rather than bringing the snake back for a second chance at the spotlight, Budoka Pupil was the play from Ellis. He gradually built up a team of ground pounders while Ishida went for fliers. Without many 'fatty boom booms' from Chad's side of the field, the race looked pretty even, though Ellis had issues with going for all-out attacks as the Japanese Ninja loomed large. Shinen of Life's Roar was his answer to this little problem, who additionally made his pupil able to flip, as he had already gained a single counter when Ellis played a Kami of the Hunt.

Moonbow Illusionist got a little tricky with Ellis' land, presumably to increase the size of Ishida's hand, which is now so much more important with Saviors of Kamigawa in the mix. An Eye of Nowhere splicing Psychic Puppetry to bounce the Pupil and tap Ellis' last blocker seemed like it would lead to massive card advantage with Ishida's ninja being able to swing unopposed, but Ellis had a Yamabushi's flame and the single mountain he needed to cast it. While Ishida had achieved the sublime, Ellis was loathe to allow too many ridiculous turns for his opponent. 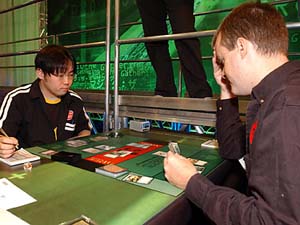 Things were looking grim for Chad.

Kabuto Moth briefly came out to play for Chad, but was savagely Befouled before he could even get active. Kissed goodbye by the YMGer, things were pretty even on both board position and life totals despite Ishida's best efforts to the contrary. His fliers allowed a Throat Slitter to do his dirty work, killing the normally very powerful "lure guy" Kami of Life's Roar, and getting an audible frown from Chad. Apparently a frown actually sounds like the word frown -- onomatopoeia strikes again. It got turned upside-down in short order though, as Chad played a Commune With Nature into a second tempting lure spirit.

With each play from Ishida it appeared that the board was shifting in his favour, as he gradually eked out a team that Ellis would have trouble stopping -- especially given the huge amount of fliers, and not a Kashi-Tribe Archer in sight.

"I'm not winning this game, am I?" asked Chad with a sigh, which was enough to crack Ishida's poker face into a small smile. He then simply turned his fliers sideways and it was all over.

It turns out that all Itaru Ishida had for Chad Ellis on his birthday was a serving of beatdown, Japanese style.