Modern is the perfect playground for a brewer the caliber of Conley Woods. Rising to notoriety due to his incredibly innovative decks, Woods achieved his greatest success in at Worlds 2011 in San Francisco, where he ran the field on his way to a third place finish. According to Woods, the biggest reason for his success is that he had decided to stop trying to be clever for the sake of being clever, and he chose to just play the best deck in the format. True to form, Woods has chosen to play his take on what many players feel is the best deck in the format right now: Jund. 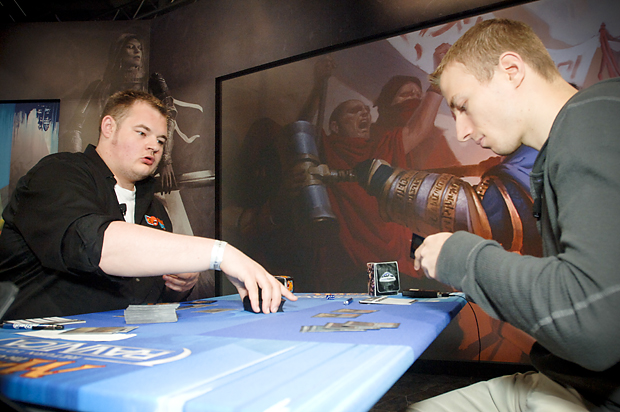 A first-turn Inquisition of Kozilek from Woods revealed two Vendilion Cliques, Cryptic Command, and Serum Visions. "What?! No eggs," Woods exclaimed as Floch fanned his hand. Woods took the Serum Visions and then followed that up on the next turn with a second inquisition, this time taking the command. Woods was on the board first, making a Geralf's Messenger that hit Floch for two. Floch used his Clique during Woods's next draw step, washing the Geralf's Messenger in his hand away. This still left Woods with a Bloodbraid Elf, which he cast to cascade into a Dark Confidant. His attack traded the Elf for the Clique, and Floch fell to 13.

Floch tried to stay afloat. Woods was racking up the advantage with his Dark Confidant, grabbing a Deathrite Shaman and a land over the first couple of turns. Floch used a Snapcaster Mage to recast his Serum Visions, also providing him a blocker to trade with the Messenger on Woods's side. 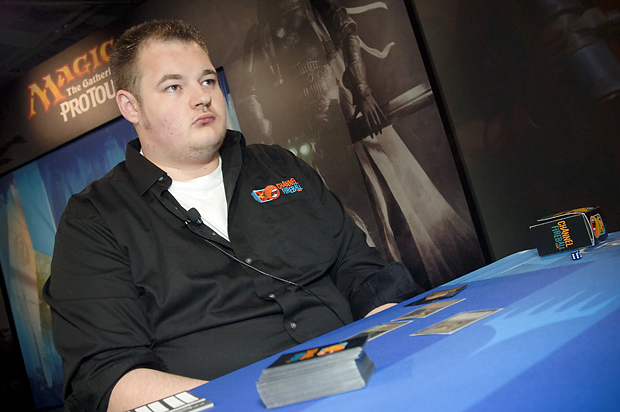 Woods has a devastating line-up of creatures to cast in his Jund deck.

Woods attempted a Tarmogoyf, which met a Spell Snare, leaving Woods with but a single card in hand. Fortunately, that card proved to be the best. A Bloodbraid Elf came down, cascading into a Liliana of the Veil, gving Woods a perfect way to take advantage of that now empty hand. With a massive board presence and Liliana taking cards away from Floch at no detriment to himself, Woods appeared to be completely in the driver's seat.

Floch defended the fort for one more turn before conceding to Woods's clearly superior board.

This match was a classic battle of Jund against a deck with Islands, one which Jund frequently wins. The combination of discard, aggression, and the cascade of Bloodbraid Elf was a perfect recipe to overrun the defenses of most of the blue decks in the field.

Floch came out quickly in the second game, using Serum Visions to sift through his deck before playing a Steam Vents untapped. He was signaling to Woods that he had a Spell Snare for the upcoming second turn, but Woods walked into it anyway.

"I will get this guy Spell Snared," he said as he cast a Tarmogoyf.

Needless to say, he was puzzled when Floch gave the creature to him.

"Do you have Threads of Disloyalty?" Woods asked as he dropped the creature into play. While Floch didn't have the Threads, he did have a massive haymaker in the form of Vedalken Shackles. He also had a Blood Moon to lock Woods down to Mountains and a lone Swamp. Woods simply used Lightning Bolt to hit Floch before attacking for 3 and casting a Dark Confidant. That was all the attacking Woods was going to get to do. The Shackles took the Goyf, and Floch used a Lightning Bolt to kill the Confidant, leaving Woods with no board. 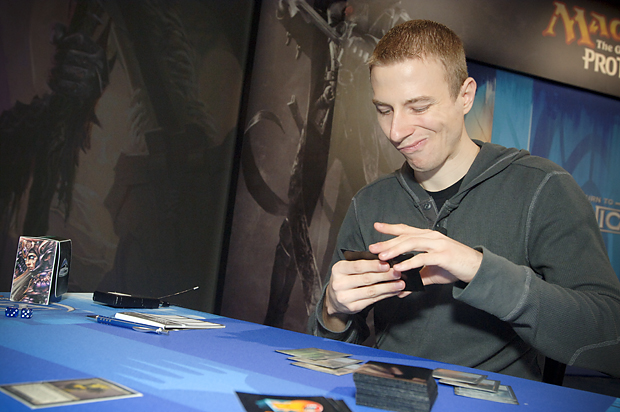 Floch battles back to leave his opponent short on threats.

Despite having no creatures, Woods made a great effort to keep this game close. He aimed a pair of Bolts at Floch, dropping him to the incredibly precarious 2 life. All it would take was sneaking through a Blightning or the final Bolt, and he had two turns in which to do it. Unfortunately, two turns was not enough, as Floch attacked Woods to death with his own creature before he could draw the spell to finish things off,

On the play for the final game of the match, Woods took care to develop his mana in a way that would make him less susceptible to Blood Moon that had locked him out of the previous game. He used a Verdant Catacombs to fetch a Swamp, giving him access to a Dark Confidant.

"Have the Bolt?" Woods asked.

"If you don't have it and you draw it off of that, I'm going to be a little upset," Woods told him with a cold stare.

"I'm pretty lucky," Floch responded, trying to needle Woods a little before killing the Confidant with a Lightning Bolt that was clearly already in his hand.

Woods tried to get a better handle on his current situation, using Inquisition of Kozilek to strip Floch of a Tarmogoyf, leaving him with a Vedalken Shackles, Threads of Disloyalty, and Sleight of Hand in reserve. When Floch used Threads of Disloyalty to steal the Goyf on the following turn, Woods displayed why he was so nonchalant about letting Floch keep the Threads in his hand. A Maelstrom Pulse eradicated the Threads, returning the Goyf to his former master. Floch replaced his defected defector with a Huntmaster of the Fells, fresh off of the top of the deck. Despite having cards in hand, Woods simply passed the turn, allowing the Huntmaster to flip and shoot it. It was a 5/6, so the measly two points wasn't able to really do anything except force Woods to think twice about blocking the newly transformed Ravager of the Fells.

The Dark Ascension werewolf is on the hunt in Modern.

Floch attacked with his Ravager, knowing full well that Woods was unlikely to block it. Woods did decide against blocking, and he used an Abrupt Decay to destroy the Ravager, which had a converted mana cost of zero in his transformed state. In response to this, however, Floch used his Snapcaster Mage to recast and exile the Lightning Bolt in his graveyard, the only instant between both graveyards. This allowed him to both deal three damage to the Tarmogoyf that already had two points on it from the Ravager, but it allowed him to shrink the Goyf down to a 4/5, making those three points of damage lethal.

This was good enough to bring the board back down, but neither player was out of gas. Woods made a Bloodbraid Elf, cascading into the innocuously powerful Deathrite Shaman. The Elf attacked and traded with Floch's Snapcaster. Floch replenished his own board with a second Huntmaster of the Fells. Woods completed the task of filling his own board with a second Deathrite Shaman and a perilously unprotected Liliana of the Veil. This was the end of Woods's hand, leaving him with no answer to the Shackles he knew was still in Floch's hand. When Floch played the artifact on the following turn, he immediately stole a Shaman from Woods, giving him a blocker for the upcoming turns. He sent his team in to kill Liliana and then passed the turn. Woods untapped, activated a Raging Ravine, and attacked Floch. The stolen Shaman sacrificed himself for his new team, freeing up the Shackles for one more theft, though the attack was enough to put the Ravine one power above the number of Islands on Floch's side.

Unfortunately, it also allowed Floch to transform another Huntmaster. After stealing Woods's last creature with his Shackles, Floch sent his team. Floch continued the assault until Woods finally drew a card to stop him, saving his life on the last possible turn.

"Good topdeck," Woods admitted as he tapped mana to play the Batterskull he had drawn. The lifelink, vigilant creature provided a long-shot chance to get back into the game. Floch only controlled three Islands, one short of being able to steal the living weapon. Woods crossed his fingers. Floch drew his card for the turn. He looked concerned. He then used a Serum Visions to try one more time.

Bam! He slammed another Island into play alongside a second Shackles, immediately taking the Batterskull and clearing the way for his troops to take the match.