guys have faced each other once before, at Pro Tour - Hawaii, where Osyp took down the win. As they shuffled up for this one, I asked about their record from the first round. Osyp was quick with his response: "Yeah, we both lost first round. But I don't know who he lost to. I lost to Tiago Chan, and the rest of our table is awful!" 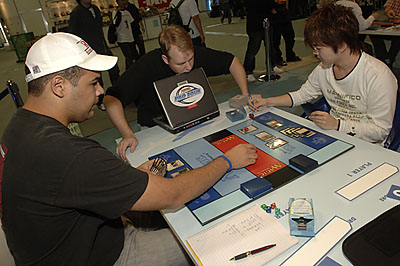 Osyp Lebedowicz and Shuu Komuro square off, while Scott chews on his laptop.

Shuu, not a man of many words (at least, not in English), just smiled, won the roll, and opted to go first. His opening hand was worth running, but Osyp had to go to six. From there he had a keeper, however, so the race was on. This match-up turned out to be black-white for Osyp against red-white (splash green) for Shuu. Neither player had a creature for turn two, though Shuu at least had a Fungal Reaches to use the extra mana. From there it was Amrou Seekers for the Japanese player against Faceless Devourer for Osyp. Shuu spent some time on this one, prompting Osyp to ask if he was done, reaching to untap his permanents in a rush with a big smile, but Shuu just laughed, tapped two of his four mana, and suspended a Duskrider Peregrine.

From here, Osyp kept putting on the pressure, swinging in and dropping a Benalish Cavalry and using the rest of his mana to Sudden Death a fresh Keldon Halberdier from the Japanese player. Seekers went in again, making it 14-14, and were joined by Bonesplitter Sliver for Shuu. The best Osyp could do was Mana Skimmer. Now the Peregrine joined the fight, putting Osyp behind on development, and a morph only increased Shuu's advantage. The Skimmer took out the Bonesplitter, making it Osyp 9 - Shu 6, but Osyp, who had 5 mana up, simply said go. In came the team from Shuu, putting Osyp at 2. Shuu passed the turn but used his Fungal Reaches to generate the needed double red to cast Fiery Temper in the American's upkeep, burning him out of the game with an extra point to spare. As they gatherer up their cards for Game 2, Shuu's morph was revealed to be Fortune Thief. 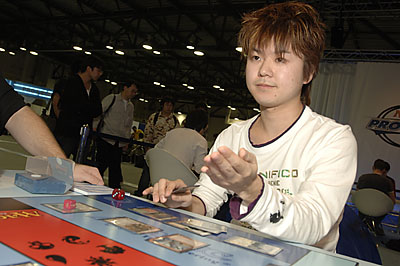 Osyp chose to play for this one, but shook his head in frustration and had to ship this opener back too, accompanied by a couple choice words. The second hand was instantly declared a keeper, and the race was on. Like the first game, this was a race with little blocking and lots of good fighting creatures. For Shuu it was a suspended Halberdier, followed by a morph on turn three and then a Bonesplitter Sliver. Osyp was the faster, however, running out Benalish Cavalry, morph, and then Serra Avenger, with a Clockwork Hydra the turn after that. Halberdier came into play, and Shuu went into the think tank to ponder his options. With five cards in hand to Osyp's one, he needed to find a way to stabilize. In the end, he went with Prismatic Ward (naming white) on the Halberdier, needing to draw some kind of out. Osyp swung in with the team, using the Hydra's ability to knock off the Halberdier, and followed up with a devastating Sacred Mesa. Now way behind with nothing but land in play, Shuu looked at his next card and quickly scooped. Osyp revealed the morph to be Soul Collector, which got a shake of the head from Shuu.

Osyp smiled, clearly feeling a little better. "I think my deck's pretty good if I can get my colors, but my colors really are all over the place."

This time we were back to Shuu on the play, and for the first time Osyp got to keep his opening hand. Osyp had the first play with a suspended Peregrine. Shuu answered with a morph, but Osyp had a disappointing third turn. Drawing his card, he put his heads in his hand briefly and passed the turn with no third land and no creature. Shuu moved a notch farther ahead, playing out Bonesplitter Sliver. This time it was a pause and a look to the ceiling from Osyp, who again didn't play a land. With 8 cards in his grip, he needed to discard, but fortunately he had a Dark Withering, which he was able to play with madness, taking out the sliver. Peeking over at his hand, my suspicion was confirmed that he did now have a land in hand, but had decided to hold it in order to be able to get the Dark Withering off. 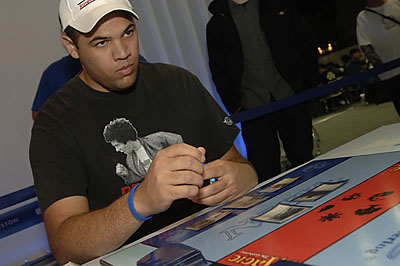 Next was Bonesplitter Sliver #2. Osyp got his third land out at last, and also got to bring in his Peregrine, looking much better. However, Osyp passed the turn with BBW up, drawing a quick suspicious look from his opponent. Shuu played a Might Sliver, Osyp asked him to wait and then thought a bit, and then said "okay." Shuu, noticing this, smiled, and hesitated over whether to attack. Osyp laughed tauntingly, pointed to himself, and declared "bluff master!" Next he pointed to Shuu's hand. "Three?" Pointing to himself, he confidently boasted "seven!" Shuu thought even harder, then passed the turn without attacking. Osyp laughed, then cast Sudden Death to take out the Might Sliver. He followed up with a swing and then Faceless Butcher on the other Sliver, swinging the game completely around and leaving just a morph for Shuu. But Shuu wasn't done yet. He had yet another Sliver, this time of the Might variety, but Osyp had Clockwork Hydra. At the end of his turn it was Osyp 16, Shuu 14.

Shuu's morph charged in, was blocked by the Hydra, which shot it for good measure, and fell over dead, turning out to be Ali fr- er, Fortune Thief. With 2 damage on the now 3/3 Hydra, Shuu was able to play a Subterranean Shambler to finish it off. Osyp took some time at the beginning of his next turn, obviously doing a bunch of math. In the end he decided to swing with his Peregrine and back it up with a Celestial Crusader, dropping Shuu to 10. His opponent paid the echo on the Shambler, played land number seven, and just said go. Looking strong, Osyp sent in the white fliers, threatening 6. Shuu looked like he was going to try to block the Crusader with a Sliver, but Osyp quickly pointed to the flying text on the crusader. Wincing a little, Shuu went to 4, untapped, made a face, and then suspiciously sent his entire (modest) team in. When the smoke had cleared, a Sulfurous Blast from Shuu was able to wipe the board, getting back Bonesplitter Sliver from the Faceless Butcher but dropping Shuu to 1 in the process. Osyp, at 9, was able to answer with Benalish Cavalry and Mana Skimmer, again threatening the win.

Shuu drew and had to just say go with eight mana up. Just in case, Osyp cast Mindstab - but enabled a Fiery Temper on his Skimmer. Osyp made a face, the remaining creatures traded, and we were off to the tops of the decks. Shuu stuck first, with a very threatening hard-cast Duskrider Peregrine, but Osyp had an Urborg Syphon-Mage! Laughing, Osyp rapped his opponent's deck before Shuu drew. "No. No!" Shuu smiled, drew, and had no answer to the Syphon-Mage. And, just like that, the match went to the American.