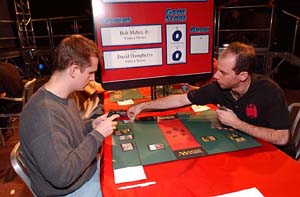 Last year's Player of the Year Bob Maher, Jr., sometimes known as The Great One, squared off against Your Move Games' David Humpherys, currently working on following up his Top 4 at New Orleans with a Masters Championship this weekend. Humpherys has drafted himself a beating of a deck with two Demoralize and to Rites of Initiation to back up a solid green-red creature base. Maher is running a blue-black control deck with the Upheaval-Psychatog combo.

Humpherys matched Maher's Filthy Cur with Mad Dog. They traded the following turn, and Maher decided to slow things down with Standstill. He needed the time against Humpherys' potent beatdown. Both stalled at four lands. Humpherys found his fifth and decided to break the silence with Rabid Elephant.

Maher pulled his three cards, then Peeked, seeing Firebolt, Rites of Initiation, Ember Beast, Demoralize, Metamorphic Wurm and Barbarian Lunatic. After getting his Peek card he let the Elephant resolve. Then he untapped and played Childhood Horror. Humpherys removed it with Firebolt, then dropped a Lunatic. Ghastly Demise took care of the Elephant at end of turn.

Then Maher seized control with Psychatog and a second Standstill. Humpherys chose to break it right away with Metamorphic Wurm. Maher came back with Morbid Hunger. He waited behind his 'Tog. Humpherys got an Ember Beast into play, working towards a possible Demoralize, Rites kill. 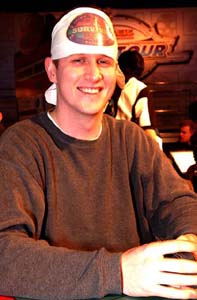 Maher kept him under wraps with a Patriarch's Desire on his Lunatic, and a Gravedigger to get back Childhood Horror. Humpherys reused his Firebolt, but it was looking bad, with Maher bearing down with Horror and Dusk Imp. It got a lot worse when he Upheavaled and replayed his Psychatog on the empty field. "I played this deck yesterday." said Humpherys as he packed it up.

Humpherys started Game 2 with Wild Mongrel. Maher had Phantom Whelp, but Humpherys was with Ember Beast. Maher made a second blue dog. Humpherys swung, and Maher double-blocked. Humpherys took his time, shifting the cards in his hand. "Oh no, he moved one to the front," said Maher, "that's never a good sign." Indeed, it foretold Refresh, taking down one dog and sending the other home.

Maher untapped and took the wind out of Humpherys's sails with Patriarch's Desire on the Mongrel. Humpherys geared up with Chatter of the Squirrel and Squirrel Nest. Maher tapped out for Balshan Griffin. Humpherys swung, losing a squirrel, then busted out Squirrel Mob. Maher's eyes went huge. "That guy's good." was all he had to say.

Maher made Gravedigger and Whelp, trying to defend. Humpherys hit with Beast and Mob, and caught Maher looking with a Muscle Burst that wrecked his team. Maher Upheavaled. It was good, but only delayed Humpherys beats. Ground Seal came back down, then Lunatic traded with Whelp. Squirrel's Nest started working. Maher's Zombie Assassin did managed to squelch both Ember Beast and Rabid Elephant with the help of Gravedigger, and answered the Mob with Psychatog, but the Nest continued to spawn, and then Humpherys showed him the red Rites for the win. 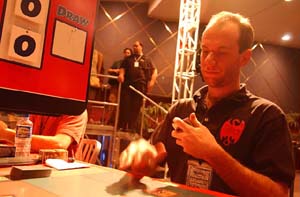 Maher was all early plays in Game 3, with Cephalid Scout and Phantom Whelp leading the charge. Humpherys had Ground Seal and Werebear. Then Maher stumbled, missing his fourth land drop, and without black mana. Humpherys dropped Rabid Elephant.

But Maher's deck was kind, and gave him the swamp he needed to make Childhood Horror. Humpherys went into overdrive with Seton's Desire. Maher chumped with his Whelp. The airforce put Humpherys to twelve. Gravedigger was another roadblock. Humpherys made a Mad Dog and fell to nine.

Maher's cavalcade of chumps continued with Phantom Whelp, with a second Whelp in tow. Humpherys attacked with dog and elephant, eating the Whelp and putting Maher to eighteen. However, Lithatog made things very scary for Maher. He needed a full minute to suss out his next move. "This is a very tough one."

He swung for four, leaving nothing back to block and four lands untapped. Humpherys put all his men in the Red Zone. Maher knew what was coming. Humpherys ditched his hand to Rites of Initiation. Maher triple-checked that he couldn't remove two of the attackers, then conceded.