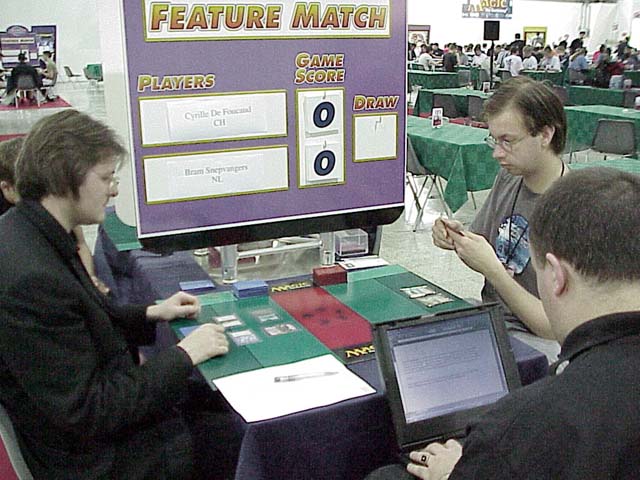 Bram Snepvangers is well known for his unorthodox decks. He piloted his unusual Oath deck to a second place finish in Florence this year, came 10th at Pro Tour Los Angeles and piloted his Obliterate deck to a 21st place finish in Japan. Cyrille De Foucaud is an old school player who finished 3rd at the first World Championships. Now he's back, competing here in the second round, where his match with Snepvangers should prove to be an interesting one.

With Cyrille winning the coin toss, he started with the ideal first turn play: Brushland, Birds of Paradise, go, which he followed with a Fires of Yavimaya after Bram played a Coastal Tower. On Bram's turn, he surprised De Foucaud with a Wax/Wane on the Fires, leaving the Swiss player to wonder what Bram's deck was about. Cyrille then cast a Flametongue Kavu, killing his own Bird before Bram cast a Ramosian Lieutenant, leaving one to wonder whether the casting of the Kavu was a mistake.

With Cyrille casting Llanowar Elf with the Kavu, he was more than able to summon the mana for a Saproling Burst on his next turn. Unfortunately, Bram had a surprise waiting, with Cloudchaser Eagle gaining him card advantage, killing the Burst. Cyrille them made a mistake, giving up his turn without using the last spell in his hand, Urza's Rage, to kill the Lieutenant while Snepvangers was tapped out, and this opened the floodgates. Lin Sivvi was immediately summoned, and while Cyrille was able to Rage her, the Lieutenant was still in play, meaning another Rebel Legend could be summoned at will. Fortunately, Cyrille then drew well. First he pulled a Blastoderm off the top of his deck, and then, with seven mana in play, it was Obliterate. Bram began searching Rebels out of his highly metagamed deck with a handful of cards, but again Cyrille drew well, with his Thornscape Battlemage killing a Defiant Vanguard, meaning the Lieutenant would be forced to search out a second to kill the 5/5. 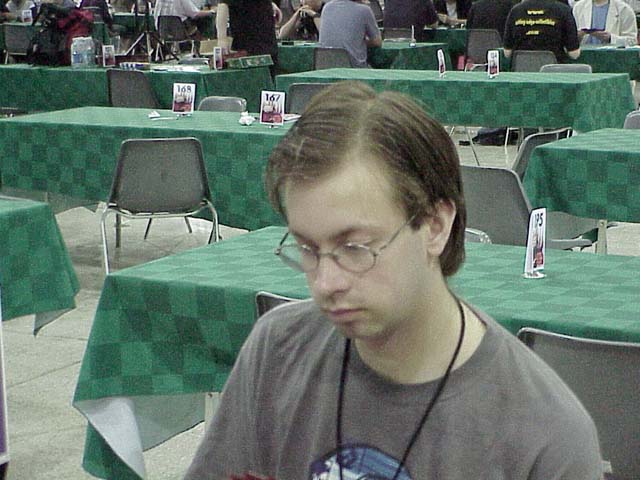 With the Eagle attacking every turn, Cyrille went to nine life, but Cyrille drew a Flametongue Kavu. Fortunately, Bram had a trick up his sleeve, casting Reverent Mantra and naming red, forcing the Kavu to kill itself. With fun banter trading back and forth between the players, Cyrille drew and cast a Llanowar Elf after Bram played his 8th land, potentially a mistake, and after the Eagle took the old timer to 5 life, he cast Obliterate, taking Bram completely by surprise. Bram cast Eladamri's Call, fetching a Sergeant and used Lin Sivvi do but the already killed Sivvi on the bottom of the library.

Both players then took turns top decking. Bram played Elfhame Palace, but Cyrille countered, drawing and playing Rishadan Port. Bram then drew a Brushland, allowing him to cast the Sergeant before drawing another land and casting Defiant Falcon. With Cyrille continuing to draw lands, he played his third, fourth and fifth, and knowing the Rebels could attack for the win next turn, he conceded.

Between games, De Foucaud claimed himself the original Magic player, noting he started with Alpha at the first ever GenCon. The ageless one started the game with a Forest and Port, followed by a Mountain, with the Port forcing the Dutchman to wait until turn three to cast a Ramosian Lieutenant, which was immediately dispatched by one of two Urza's Rages in Cyrille's opening hand. 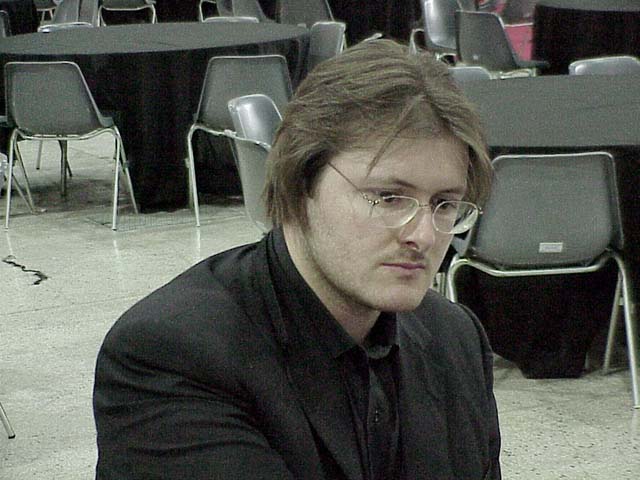 Bram then cast Defiant Vanguard, but it met its untimely demise at the hands of a Flametongue Kavu. Playing his fifth land, Bram cast Steadfast Guard, forcing Snepvangers to Wax his Guard, allowing it to live to block another day, that day coming quickly as the Flametongue traded with it. Bram then cast Defiant Vanguard, but the second Rage was waiting along with a Blastoderm. At the end of Cyrille's turn, Bram cast Eladamri's Call, retrieving Lin Sivvi before untapping, drawing and casting her.

Blastoderm took Bram to 14, but then died next turn to yet another Vanguard. At the end of Bram's turn, Cyrille created three token creatures with Rith's Charm, but things were looking bleak as he prayed for Obliterate to rise to the top of is deck. Instead, Cyrille drew a big surprise in the form of limited play powerhouse Tangarth, and suddenly the game became interesting. Lin Sivvi searched for another Steadfast Guard, giving Bram quantity to Cyrille's Quality. He then cast Meddling Mage, naming Obliterate and a Mageta, forcing Cyrille to make a tough choice, but Cyrille made a strong top deck, with Flametongue Kavu killing Mageta, after which the Minataur attacked and killed Lin Sivvi.

The next creature to enter play was Meddling Mage, naming Thornscape Battlemage but the boom came right after when Stanch Defenders was cast, gaining Bram four life. Tangarth attacked, taking the Thornscape-Meddling Mage and the Defenders with it. With the Vanguard back, Cyrille cast Shivan Wurm, which was unable to attack and live, and when he said go, Bram searched for Lin Sivvi again. Soon, the table was swarming with Rebels, with Cyrille holding a hand full of lands in case of an eventual chance at Obliterate he conceded.