Round 2: Brian Davis vs. Bob Maher 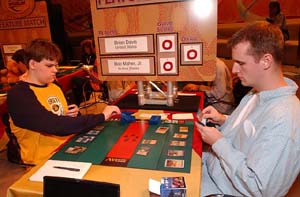 Where do you even begin here? For starters, this is Bob Maher's first major tournament since coming back from his six month suspension. Across the table from him is his Pro Tour Chicago 99 opponent, Brian Davis. For those of you who may not be familiar with Pro Tour history, Chicago 99 was Davis' first Pro Tour, while Maher was already an established veteran. Maher lived in the area and was a clear crowd favorite, and it seemed that almost everyone wanted to see "The Great One" win his first Pro Tour. Whether it was the pressure of being in a Pro Tour final or simply a matter of being outplayed, Davis threw away games he should have won (read the coverage of that match here). In fact, Pro Tour historians often note that looking at both players' draws in each game, Davis should have won the match 5-0. However, some notorious play errors swung the match in Maher's favor. Due to this, many believed Davis' Finals accomplishment to be a fluke. However, thanks to a ninth place Worlds finish and a recent Top 8 at Nice, Davis has shown that he is a player capable of multiple top finishes. This week, Davis is looking to add to his list of accomplishments and kill off the ghosts of Chicago, while Maher wants to re-establish himself as one of the best players in the world.

Maher's second-turn Werebear was Memory Lapsed, and Davis tapped out turn three for Psychatog. Maher Repulsed the 'Tog, and Werebear came out on the following turn. Davis played Cunning Wish on end step to get Ghastly Demise, and took out the bear. A second Demise killed off another Werebear, and Maher summoned Mystic Enforcer, which resolved. Cunning Wish got Opportunity, and Maher used Ice on upkeep to keep Davis at five mana sources for the turn. The Enforcer attacked for three damage, and was joined by Wild Mongrel. Davis untapped and cast a main phase Opportunity, while Maher sent his team for five damage. 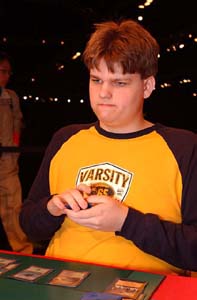 It was now time for Davis to take control of the board, and he started off by casting Chainer's Edict, which killed the Mongrel. This was followed by Nightscape Familiar, which was Repulsed on end step. Fire targeted Davis to bring him down to ten, and gave Maher threshold. The Enforcer attacked to bring Davis down to four life points, and Flametongue Kavu was Counterspelled. Staring down a lethal attack on the next turn, Davis did what a Psychatog deck does best. He cast Upheaval floating two mana, played a land and summoned Psychatog onto the empty board.

Davis mulliganed his opening hand. Maher's second turn Wild Mongrel was countered with Force Spike. A few turns later Phantom Centaur was Memory Lapsed, and Davis brought out Nightscape Familiar. When the Centaur came back out, it was countered by Circular Logic. Fact or Fiction gave Davis some more cards, and Maher now had to find a way to punch through Davis' countermagic before the card drawing spells made it impossible. An Anurid Brushhopper resolved, and Chainer's Edict became Mind Rot, as Maher discarded a land and a Flametongue Kavu to keep his Brushhopper alive. This left him with only one card in hand. That card turned out to be Gainsay, and it countered Davis' Fact or Fiction.

Maher now had no cards in hand, and Davis was tapped out. He needed to topdeck a serious threat to stay in the game, and did just that, drawing Phantom Centaur. It attacked once, and Davis used Repulse on end step to bounce it. Maher responded with Fact or Fiction, and was obviously doing a good job of topdecking powerful spells at this point in the game. The piles presented were Flametongue, Brushhopper, City of Brass and Fire/Ice, Fact or Fiction. Maher took the two card pile and Repulse resolved. On the next turn Maher cast a killer Fact or Fiction, The piles made were Phantom Centaur, Wild Mongrel and Fire/Ice, two Seedtime. Maher took the three card pile. With Brushhopper and Nightscape Familiar exchanging attacks, Maher seemed to have a chance to squeeze through enough damage to force a third game.

On end step, Cunning Wish got Davis Opportunity. He then played it on main phase to get around Maher's two green Time Walks. On the next turn he played a second Familiar, and Maher cast Fire on both. Davis countered it with Memory Lapse, and Maher had a Repulse, which was countered with Force Spike. Fire was replayed, and Davis responded with Fact or Fiction, which gave him the Counterspell necessary to counter the it. Davis' Familiar was tapped down with Ice, and the resulting attack brought him down to three life points. Mystic Enforcer hit the board but was targeted by Repulse on end step. Maher responded with Seedtime, but Davis had Counterspell. Davis' army then became huge, as he summoned a Nightscape Familiar and Psychatog.

At this point, Davis was at one life point, and there was an argument over whether or not he had tapped his lands for Nightscape Familiar and a Psychatog in the wrong order. If he had, Underground River had to be tapped for a colored mana to summon Psychatog, which would bring Davis to zero life points. Mark Rosewater was called over and Maher had a strong argument, while Davis' response was, "He might be right, I don't remember." Davis appealed to Head Judge Collin Jackson, who ruled that Maher's argument was more convincing, and the Underground River killed Davis to bring the match to a third game. 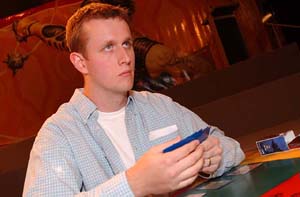 Maher double-mulliganed to start, but there was very little time left on the clock, and Davis' Psychatog deck was not quite capable of a quick kill. Ice tapped down Davis' Cephalid Coliseum on upkeep, which nullified his mana due to his other lands being Darkwater Catacombs. The same play occurred on the following turn, and Davis was stuck at three lands, and could not use any of them. Maher took advantage of the situation with Fact or Fiction, Looter and Werebear were summoned on the following turn, and time was called. Repulse brought back the Werebear. Even though Maher had recovered quite well from his double mulligan draw, Davis still had a full hand that seemingly had all the answers. The game was still up for grabs, but was forced to a draw once the final five turns ran out.