Round 2: Brian Kibler vs. Dirk Baberowski 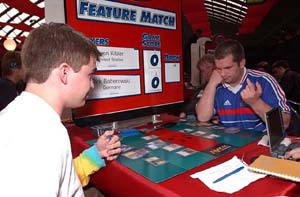 In a clash of fashion statements we have a German Pro Tour, and Masters, champion wearing a French football jersey (current world champions by the way) against a sandal-wearing, dragon-loving American famous for his deckbuilding skills.

Kibler's match didn't start in a very good way. He was forced to mulligan and kept a one land hand. When he missed his second land drop Dirk peeked and seeing the handful of goodies raised his eyebrows.

Dirk: "How, that's a good hand."
Brian: "Remove two random cards and give two lands and it would even be better."

When Kibler found his second, and third land, Dirk only had two small creatures. The American played his Looter, which got Repelled and replayed, and tried to gain control of the game at fourteen.

He played an Aven Cloudchaser and Baberowski smirked. His feeble beats were in trouble. A Call of the Herd promised the end of any attacks but the German had a Repel.

On and on Baberowski played marginal cards keeping the pressure while Kibler danced around the Cephalid Aristocrat that was slowly bringing his life down.

He finally seemed to have the beast under control with a Psionic Gift on Mystic Visionary and Aven Cloudchaser facing Aristocrat and Cephalid Scout. The Aristocrat brought Kibler down to two and Dirk added a Mystic Familiar to the mix.

With his mana problems now totally fixed Kibler played Aven Flock with one Plains untapped. He had now had the right blocker for the Aristocrat. On the next swing the Cloudchaser chumped the Cephalid while the Flock stopped the thresholded Familiar.

The only thing that sneaked through was the Scout. But it was enough to drop Brian Kibler to one. With his back firmly against the wall he played Hypochondria.

Baberowski seemed out of steam but he had a surprise in store: Aboshan. The legend itself resolved and although it couldn't work around all the fliers it was enough of a threat. 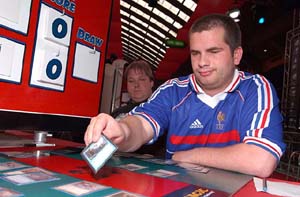 The American was now walking a fine line. He kept sending his fliers in trying to finish Dirk before he could mount on last, and fatal, attack. One of them got removed by Second Thoughts.

Brian: "You had a couple of good draw steps."
Dirk: "Can't complain."

The Hypochondria was the only thing keeping Kibler alive. A Deep Analysis made Baberowski very happy and the reason was quickly clear to all. He had found his Cloudchaser. The white enchantment exited the playing field but not before Kibler used its ability and mourned its departure.

The final resistance of the American was broken. With a mint full of lands he could nothing as Aboshan tapped one of his two remaining blockers to clear the way for the German air force.

They sideboarded in silence before laughing all the way through the shuffling. Despite the early mana problems Kibler fought back to almost control the first game and that served has a warning to Dirk Baberowski that he had to be very careful.

A first turn Peek at Kibler's hand had Baberowski shaking his head. If the American could draw a Plains or Forest he was in business.

Brian: "You better not draw a third land."

Despite the plea Brian found a third Island to play his Looter and followed with Mystic Zealot. The German liked the Looter trick so much he stole it with a Persuasion.

Deprived of his digging engine Kibler simply found a Forest and played a Call and a Mystic Visionary. It was clear he was trying to race the German before his own Looter got him into trouble.

A Scrivener traded with the Visionary and Kibler upgraded his air team with Aven Windreader. Baberowski Repelled it out of the way to gain some time. Between the Looter, Scout and a Deep Analysis Baberowski fought hard to find an answer to the mounting army.

The Windreader came back and brought a second Elephant token with it. Kibler pushed everyone into the Red Zone and Dirk went into chump blocking mode.

He got a Kirtar's Desire as a going away present from the Looter and called it a "good start". He used it to stop the Windreader but it was way too little way too late.

Kibler didn't even bother to attack. He just played Psionic Gift on a creature and dealt the final point of damage sending us into the third, and decisive, game.

This time Kibler came out with a vengeance, playing a turn two Mystic Visionary followed by Cephalid Looter. Dirk Peeked to see the trouble ahead and was not pleased.

He Repelled the Looter but the American already had a Patrol Hound in action. Baberowski needed a good blocker and he got it in the shape of Cephalid Aristocrat. With the ground locked Kibler played Aven Cloudchaser to keep the pressure. 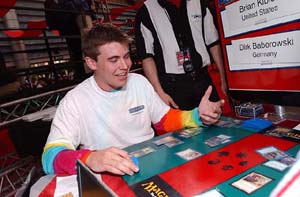 Still Dirk was on the comeback trail. He followed Aristocrat with Aboshan but Kibler was ready with the Stupefying Touch. That would have put a dent on Baberowski's defensive plans. But the German was ready for it and played his own Cloudchaser to free up the legendary Aboshan.

Kibler was now almost locked out. His only active source of damage was Cloudchaser with a Floating Shield giving it protection from blue. Dirk sent his whole team in and the protected Cloudchaser blocked Aboshan.

The control of the table had shifted sides. Kibler played Aven Flock and attacked with the Cloudchaser bringing Dirk down to ten. When the Flock gained a Floating Shield of his own Kibler had found a problem Dirk couldn't solve. The German delayed it with a card that promised to mess up the math for the rest of the game: Embolden.

With time running out Baberowki sent his whole crew in forcing Kibler to sit back playing defence to save the game. He double blocked the Aristocrat and Dirk saved it with Embolden as time was called.

At one life, once again, Kibler played Hypochondria hoping to stall out things. Relentlessly Dirk tapped the blockers out of the way and attacked, forcing Kibler to lose his whole hand to the enchantment.

Kibler sent his Looter and Hound in, dropping Dirk to six, and sat back hoping to survive through the last attack phase of the German. For several long minutes, Dirk Baberowski agonized over his chances, trying to will out a way to sneak past Kibler's defensive barrier.

In the end neither of them found a way to solve the puzzle.

1 Breakthrough 1 Call of the Herd

1 Call of the Herd 1 Piper's Melody