Round 2: Brian Kibler vs. Rob Dougherty 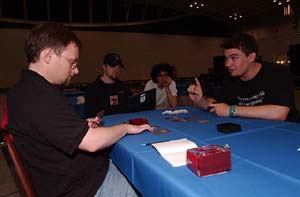 Kibler is running Tinker today, and while shuffling was talking about how no one really tested for his deck. As it turns out, a few players are playing Tinker, and sideboard cards devoted to beating it are certainly not plentiful. Dougherty is running his signature Reanimator deck.

Kibler played Voltaic Key, and Dougherty cast Cabal Therapy on Grim Monolith, which missed. Vampiric Tutor was used on Dougherty's upkeep, and on the next turn he cast Entomb to get Verdant Force. Exhume brought it out, putting a significant amount of pressure on the board. Masticore gave Kibler a decent way to handle the 7/7, although it would tie up his mana.

A Saproling was sacrificed to flash back Therapy, and Dougherty guessed Upheaval. He saw Kibler's hand, which was Ancient Tomb and Tinker. Masticore attacked for four damage, and Tinker turned Voltaic Key into Thran Dynamo. With another Key in play, this gave Kibler more mana to work with under the Masticore- he would need it with only one card in his hand.

Dougherty cast another Vampiric Tutor on end step, while Masticore shot down all the Saprolings. Entomb put Faceless Butcher into the graveyard, and Exhume brought it into play, taking out Masticore. Tinker traded Voltaic Key for another Masticore, and Kibler had just enough mana to shoot down Faceless Butcher. Kibler still only had one card in hand, but it was a good one- Stroke of Genius. Suddenly he was up six cards, and was able to keep both his Masticores alive by discarding two cards. 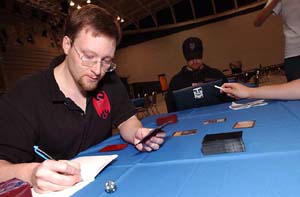 Exhume brought back Faceless Butcher, taking out one of the Masticores. Kibler only had one mana up and was at two life, so he was forced to chump block Verdant Force with Masticore. Upheaval got a big laugh out of Dougherty, as it put Masticore into play after it resolved and bounced the Butcher. Thanks to that and two Rishadan Ports, Kibler was able to win the game.

Kibler talked about how he had Tinker in hand earlier in the game, and didn't cast it.

Kibler- "That made me at least think that you couldn't possibly Cabal Therapy me for Tinker, since playing Tinker was the right play."

Dougherty- "I was thinking that was either moronic or pure genius."

Kibler started off with Seal of Removal, and had Port turn two. Thran Dynamo and Tangle Wire followed, putting Dougherty into a very bad position. He played Entomb on end step to get Nether Spirit, which came right into play on upkeep. A second Entomb put Woodripper into the graveyard. Kibler simply played Metalworker, and ended his turn. Exhume put Woodripper into play, and it destroyed Metalworker and Thran Dynamo; Seal of Removal bounced it back.

Cabal Therapy named Tinker, and Dougherty saw Seal of Removal, Voltaic Key, Masticore and Metalworker. Nether Spirit was sacrificed to flash it back, taking care of the Seal. Kibler summoned Metalworker, which died to Diabolic Edict. Phyrexian Negator gave Dougherty a significant clock, while Kibler played Thran Dynamo and Masticore, and the Spirit and Negator attacked for seven. Kibler floated mana, casting Upheaval. Thran Dynamo, Voltaic Key and Masticore followed, while Dougherty had no permanents in play. Rishadan Port and Tangle Wire had Dougherty's resources tied up, but he was still able to squeeze through Entomb and ReanimateWoodripper. It decimated Kibler's side, and a pair of Negators came out a few turns later to finish the job. 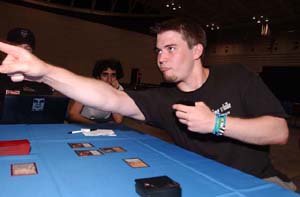 Kibler mulliganed his opening hand, and opened with City of Traitors and Grim Monolith. Dougherty named Tinker with Cabal Therapy, and saw two lands, Dynamo and Upheaval. Dynamo came out on the following turn, island buried the City, and Seal of Removal gave Kibler a good insurance policy. Duress stripped away Upheaval, leaving Kibler with only an island in hand. He drew, shrugged, and cast the Tinker he topdecked, getting Phyrexian Processor. It was set to ten, and made a token immediately. Faceless Butcher killed it off, and Kibler played Voltaic Key.

Diabolic Edict killed the next token, but it was obviously an uphill battle. The Butcher chump blocked a 10/10, and Kibler played Seal of Removal. Dougherty cast Vampiric Tutor to get Entomb, which put a Woodripper into the graveyard. It was Reanimated, and took out the Dynamo and Processor, but not before it could make a second 10/10. Seal of Removal bounced the Woodripper, and the 10/10's came in for the win.

Kibler- "It's the same strategy as in 2000. If they deal with the Processor, they probably can't deal with 10/10 creatures."