Round 2: Brian Phillips vs. Bryn Kenney 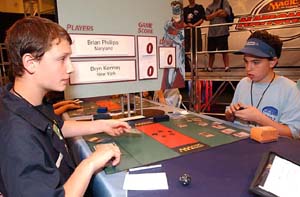 Both of these players had the unfortunate experience of starting off this important tournament with a loss. A second loss would likely mean a long face and an even longer day for the defeated mage.

Bryn is a Neutral Ground New York regular, known for his many JSS top 8's, in addition to a level of Grudge Match success. This is his second JSS Championships, and when asked about how last year went all he could do was shake his head. Brian hails from Cape Cod, Massachusetts and is playing in his first JSS Championships. Both players are old-timers for JSS though, at 15 years of age each.

Brian won the roll and elected to play first. His deck featured tempo cards such as Repulse and Aether Burst, as well as the lesser-known Burst, Life Burst. Bryn is using a Blue-Green Threshold deck featuring Upheaval. 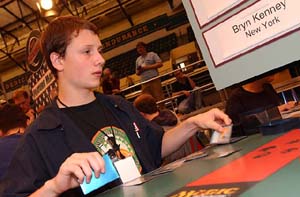 Brian played lands for the first few turns, taking time to answer Bryn's turn 2 Wild Mongrel with a Life Burst. Turn 4 saw another Mongrel from Kenney, and a Fact or Fiction during his endstep from Phillips. Bryn split the FOF into 2 Adarkar Wastes and Aether Burst or Syncopate and Island. The larger pile was taken. Phillips was content to build up his mana the next two turns, getting attacked down to16 before attempting Wrath of God with Memory Lapse backup. Bryn was ready though, Lapsing the Wrath, and Diverting the Lapse to keep his creatures on the board. The following turn saw the same Wrath, this time met with a Mystic Snake, which was unanswered. Bryn kept attacking, holding back mana for a counter war. Onlooker Osyp Lebedowicz of Pro Tour Osaka Top 8 fame reminded Bryn to use the Red Zone when attacking. The rest of the game consisted of more attacks and some bounce spells, with no action coming from the control deck. Kenney was up a game in 13 minutes.

Phillips again chose to play, leading with an Island. Bryn attempted a quick started with a turn 1 Nimble Mongoose and turn 2 Werebear. The bear got Memory Lapsed to gain some tempo. The goose kept swinging, although not really getting much accomplished. 1 point per turn isn't much of a threat when you have Life Burst in your deck. The Werebear was held back in favor of Counter protection, allowing Phillips to breathe easy. He again played Fact or Fiction on the end of Bryn's fourth turn. Bryn responded with one of his own. Bryn flipped over City of Brass, 2 Islands, Memory Lapse, and another 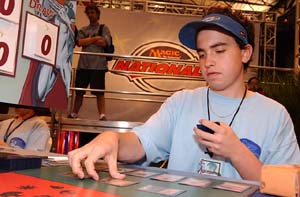 FOF. The FOF was set aside from the other cards in a lonely pile, and was subsequently sent to the bin and a 4 for 1 was too good for Bryn to pass up. Brian's FOF gained him a Cephalid Colesium and Iridescent Angel, over 3 lands. On his turn he Wrath'd away the Mongoose, allowing Bryn to replay the formerly Memory Lapsed Werebear. Phillips attempted a Meddling Mage, who was shipped to the top of his library for a turn via Memory Lapse, and Bryn used Opt on the end step. He was now 1 card away from threshold and a very dangerous Werebear. Bryn wasn't greedy though, and attacked for just 1 on his turn, content to pass the turn while building up his mana. Pikula tried another appearance, but was met with Bryn's sideboarded Gainsay. The Werebear continued the offense for 2 more turns while Phillips tried to get enough mana to play his Angel with counter back up, but he wasn't drawing enough lands. He had to go in blind, and play then angel without protection. To his surprise, it resolved. The next turn he realized why though, as Bryn played Upheaval with 4 more mana in his pool, and put 2 4/4's into play. 2 turns later Brian extended the hand.