Round 2: Brock Parker vs. Brian Hegstad 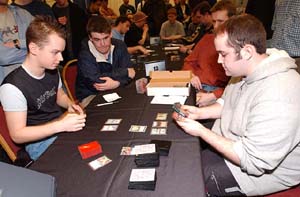 In a sea of blue-black decks, Brian Hegstad and Brock Parker stick out as rogues. Hegstad is running a Brian Kibler special: MysticEnforcer.deck. Kibler's love affair with 6/6 fliers is well known and the Enforcer is his latest favorite "dragon." The deck that was built around those four Enforcers is full of cantrips and counters (Memory Lapse - Predict is always fun.). There aren't any other creatures in the main, but the sideboard is full of men and Hegstad can transform into a green-whiter beatdown deck with Mongrels and Armadillo Cloaks if he wants to. Brock Parker is running a 244-card Battle of Wits decks.

Hegstad had trouble finding lands in Game 1, but he used steadily cantripped through his deck and filled up his graveyard. Three Memory Lapses forced Parker to play the same Addle over and over again and eventually Hegstad Predicted it away, drawing two cards in the process. When Hegstad finally got to four mana, he used Peek and saw that Parker had no threats in hand so he tapped out for Mystic Enforcer. After that he had enough countermagic for anything Parker might draw. Parker did top-deck a Battle of Wits before the game ended, but he needed to have done it the one turn Hegstad was tapped out. The odds of that were tiny so Hegstad's play seemed correct. More importantly, it won him the game.

When Hegstad went to his board for Aura Mutation, he said a silent "thank you" to his deckbuilder. It's just a little bit better than Repulse against Parker's (almost creatureless) deck. Meddling Mages also came in, just as the real life Chris Pikula made a loud entrance to the tournament site and came over to marvel at "Peekula" in action.

More Peeks allowed Hegstad to set up game 2 just the way he wanted. He forced Meddling Mage into, naming Battle of Wits of course. He knew the Battle was in Parker's hand and he also knew what removal spells parker had. That knowledge let him get Mystic Enforcer into play then sit on countermagic until Parker was dead. Hegstad had been worried about the matchup before the round began, but it looked really favorable for these two games.