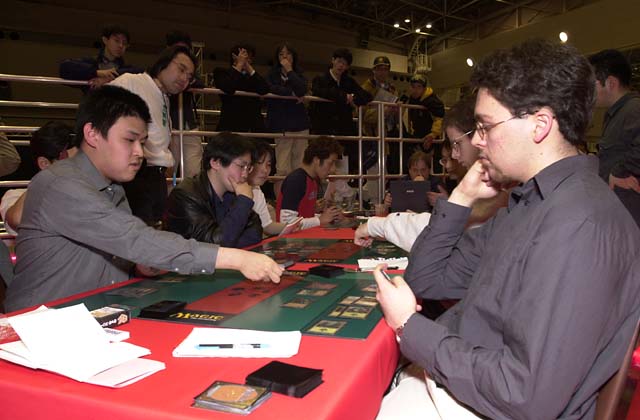 Reiji Ando, Itaru Ishida, and Reiji Ando won one Pro Tour Qualifier for New York as the "Panzer Hunters" and finished second in another. They didn't make the trip to New York for the Pro Tour itself, but their rating was high enough to earn them an invitation to the Masters Series. A lot of players didn't respect them, but they beat Nicolai Herzog's Team Outland in the quarterfinals and with found themselves one win away from an appearance on the big screen on Sunday when they took on Car Acrobatic team. The Acrobats finished second at the team Pro Tour that was won by their playtest partners Potato Nation and then CAT upset #1 seed Your Move Games in the quarterfinals.

Panzer Hunters had the higher rating and they decided to kick off. The entire draft was dictated by the first pack they opened. It contained Annihilate, Plague Spitter, and Thornscape Master as its bombs. The Hunters decided they wanted to put a black card into seat C - the seat where almost everyone plays black/red so as to maximize Terminates and other Planeshift black/red goodies. They also decided to put Thunderscape Master into Itaru Ishida's deck in the middle. Taking a first pick Master is a bold commitment to several colors and it allowed CAT to react and set their middle deck up so it would be good against green, but the Hunters figured that was better than having two different players start out with black cards. The black card that Ando chose to draft was Plague Spitter, thus Cuneo wound up with an Annihilate that CAT didn't expect would be available to them. With his teammates already fairly locked in to black/red and red/green/white, Kazuyuki had no real choice but to go blue/white and he also wound up splashing a bit of black because he opened a Tsabo's Decree that would otherwise have headed over to the opposition.

Knowing what their opponents were set up to do, Car Acrobatic Team felt their preferred plan would work out just fine: green beatdown on the left (set up to play against black/blue) because that seat winds up in permission to draft a lot of good 2-drops, black/blue/white control in the middle (set up to play against the Thornscape Master deck), and (of course) black/red on the right in a mirror. They got quite lucky when Forsythe, already committed to black/red, opened a Pyre Zombie in a pack that was about to head over to the other team. Johnson had been told by his roommate Mike Turian that he should try to draft his seat A decks more aggressively and that's exactly what he did, picking up two Nomadic Elves, a Kavu Titan, and two Llanowar Knights among his quality bears. Two Armadillo Cloaks rounded out his deck quite nicely. The CAT seemed pretty happy with their decks, but so too did the Panzer Hunters.

The CATs came out aggressively in game 1 of all three matches, just as their decks were designed to do. Forsythe played a Thunderscape Familiar followed by a turn 3 Volcano Imp. Cuneo put Wings of Hope on a Metathran Zombie (deal with that green mage!). And Johnson was the slowpoke with Nomadic Elf and Kavu Climber while his opponent merely bounced his Marsh Crocodile (his only creature). Reiji Ando turned the tide against Forsythe with a timely Explosive Growth that saved his Firescreamer. Forsythe then quickly ran out of gas because his draw included only 5 spells to go with his 11 land. However, his teammates were each doing much better. Johnson was kicking a Kavu Titan against an opponent with no creatures about the same time Cuneo was following up his Bog Down with a Probe (with kicker). 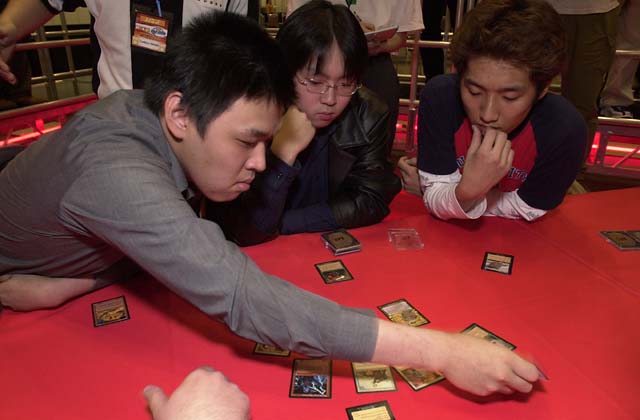 Kazuyuki took out Kavu Climber and Kavu Titan with a Tsabo's Decree to claw his way back into game 1 against Johnson. Meanwhile Forsythe drew two more lands and died a frustrated death and Cuneo finished off a helpless Itaru Ishida who never could deal with the 2/4, flying, regenerating zombie much less Samite Archer, Slay, and Galina's Knight. Eight extra eyes were on the match between Kazuyuki and Johnson while everyone else shuffled up for their respective game 2's. Slingshot Goblin isn't exactly the creature that Johnson imagined enchanting with Armadillo Cloak when he put his deck together, but sometimes you do what you have to do. The fact that the goblin was the only red creature in play also worked to Johnson's advantage because Kazuyuki couldn't target it with Barrin's Unmaking. Kazuyuki had to settled for a 2 for 2 via Death Bomb, losing his Trench Wurm. That left him with just a Tower Drake and 4 life against Fleetfoot Panther and 14. Johnson then top-decked and kicked a Benalish lancer and it was all over but the scooping. CAT was up a game in 2 out of the three matches.

Cuneo came out just as impressively in game 2 as he did in game 1. He Annihilated a Slingshot Goblin, has his Drake hunt an Ancient Kavu, and put out an offense consisting of Zanam Djinn and three Ordered Migration tokens. Ishida had the often-powerful Lashknife Barrier, but he wasn't engaged in any creature combat with Cuneo's fliers so it didn't help much. Cuneo Repulsed a Trapper and then Prohibited it so he could go for the throat a bit faster, but Ishida then played Armadillo Cloak and suddenly the game was a lot closer. Cuneo's couldn't race with his Zanam Djinn even after enchanting it with Wings of Hope, but he could leave it back on defense. A timely Aura Mutation from Ishida ruined that plan. Cuneo kicked a second Probe to clear out Ishida's hand again and finally found one of his two Hobbles. By this point, though, he only had three cards left in his library and Ishida was at 33. Cuneo tried hard, but he just couldn't deal damage fast enough.

Forsythe and Ando traded creatures and removal as black/red decks do when they play against each other. They each emptied each other's hands and went into topdeck mode. The clutch play came when Ando drew Recover, bringing back a Lava Zombie, drawing him another card, and providing him more threats than Forsythe could find answers for. Thus it was the Panzer Hunters who put the first match win up on the scoreboard, claiming a matchup they thought they might lose to a Pyre Zombie that stayed hidden in Forsythe's deck for both games. 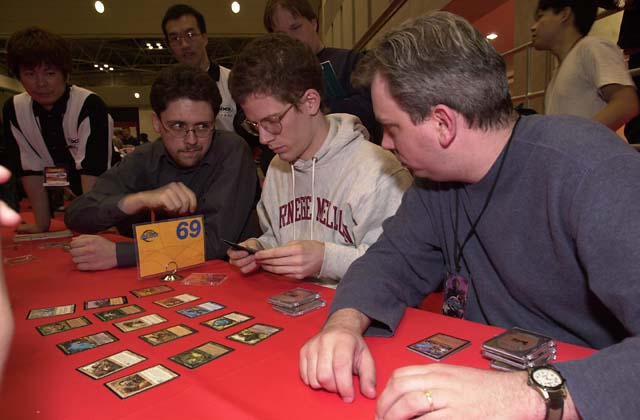 Johnson didn't have a particularly fast draw in his own game 2, but he didn't have an Armadillo Cloak. When Momose destroyed that with Barrin's Spite, his army of Tower Drakes evened that match at a game a piece and suddenly the CAT had its collective back to the wall. Both Andrews had to win game 3 if they wanted to prevent the hometown favorites from making it onto the finals stage on Sunday.

Both Cuneo and Ishida kept 1-land hands in game 3 and neither drew a second land until turn 4. Cuneo, playing first, had already mulliganed down to 6 and in some perverse way that seemed to help him because he wasn't forced to discard. When Ishida finally did draw land he was able to play what Gary Wise describes as "the single most important creature in the format" - Slingshot Goblin. Cuneo had no immediate answer for it, but he did have Samite Archer, Hunting Drake, and a pair of Repulses so Ishida was forced to spend his next three turns replaying that goblin while Cuneo dug for an answer. Cuneo didn't find an answer, but he did find a Zanam Djinn. Cuneo kept feeding creatures to the goblin and attacking. Ishida found a Trapper to shut down the Djinn, but he couldn't deal with Urborg Drake (and he only had 2 turns to find an answer before he was dead anyway). Thus it all came down to Johnson and Reiji Ando.

Vodalian Zombie plus Shoreline Raider did a good job holding Johnson back early in game 3 while Barrin's Spite set him back even further. Ando used that time to play Tower Drake and Samite Archer, but Johnson did a little better by playing two Benalish lancers, each with the kicker. One Tsabo's Decree later, though, the board was a lot more clear. There went Benalish Lancer times two and Llanowar Knight! Now Ando could start serving with his Drake, Zombie and Raider. There wasn't anything Johnson could do (even holding creatures in hand wouldn't have saved them from the Decree) - that Decree just wrecked him.