Round 2: Chris Kelly vs. Jason Rose 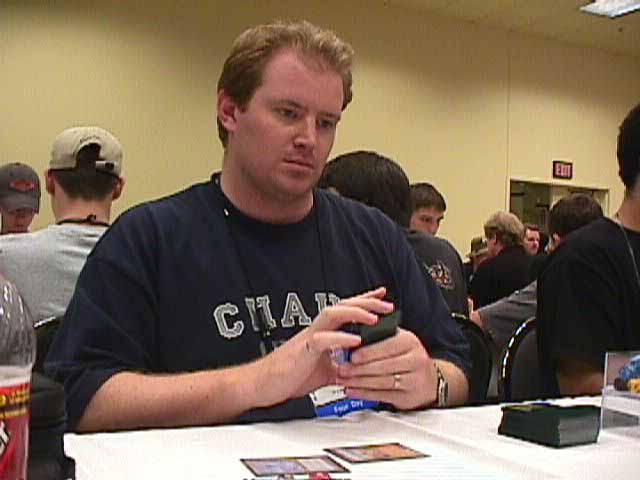 Chris Kelly and Jason Rose sat down for their round 2 match, both coming off of an easy round 1 victory. Jason is the reigning North Carolina State Champion, having won that with Control Black. Chris drove down from Toronto, hoping to take home Magic for Life. Though without much former tournament success, Chris had plenty of experience, having started to play around the release of Fallen Empires. Chris played a fairly standard Angry Hermit, while Jason chose Ponza. Jason won the roll and chose to play first.

Jason had a slow, disruptive draw, that left him with little early game. Chris immediately starting using a Port to slow him further. A Fire Diamond helped a little, but it was awhile before Jason had any options. Rofellos showed up, but was immediately Shocked. Finally, Jason found a fifth land and cast an Avalanche Rider. Chris' next play was Masticore, which was quickly Pillaged. He followed up with a second Masticore, for which Jason had no answer. Jason looked over his hand a few times and drew his card - Stone Rain, which he used to destroy a Forest. At this point, Chris forgot to upkeep his Masticore, and the game slowly slipped away. Jason gained control with Avalanche Riders, attacking repeatedly, until Chris conceded.

Chris got a quick draw with multiple mana creatures, but Jason neutralized this advantage with land destruction and Rishadan Ports. Stabilizing, Chris played Blastoderm, forcing Jason to cast Masticore to block. Chris cast two more Blastoderms, as well as his own Masticore, over the course of the next several turns. Each time he attacked, he was able to squeeze Masticore through for four damage. Eventually, both players became Masticore locked, with no other threats available. After FIFTEEN turns of Masticore lock, Chris pulled a Yavimaya Elder and used its ability. He then cast his fourth Blastoderm and Jason conceded. 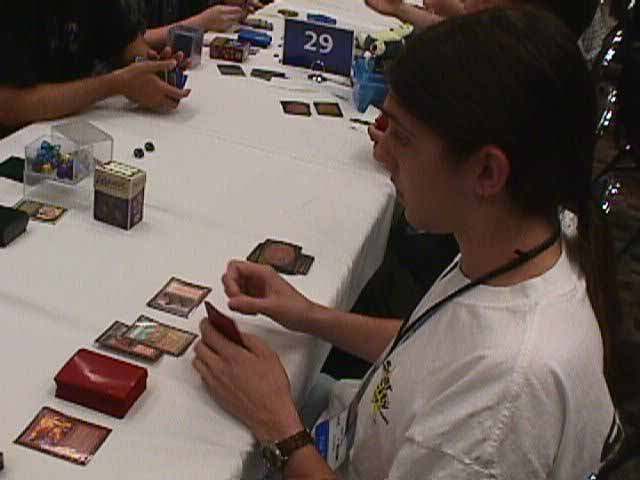 Game three started very slowly. With only twelve minutes left in the round, both players were looking for a quick victory. An early Rofellos was Shocked, Jason missed his turn three land drop and Chris began attacking with a Treetop Village. Jason drew a third land and began to attack Chris' mana base with a multitude of land destruction spells. This forced Chris into tapping his Karplusan Forest multiple times, causing him six points of damage over the course of the match. Jason saw his opportunity and playing his opening hand Masticore. Chris, though having trouble with his mana development, was able to cast a huge Splinter, removing all four of Jason's Masticores from the game. Chris started pulling out of the mana slump, casting a Birds of Paradise, but Jason quickly cast a Cursed Totem to counter it. Jason put a little pressure on with an Avalanche Rider (again limiting the Forests), but Chris pulled out an Elder followed by a Blastoderm. Jason dropped a five point Earthquake, clearing the board of everything but a Bird. Time ran out shortly after and neither player was poised to win the match. After five turns, the game was a draw.