Round 2: Chris Pape vs. Paul Sottosanti

Paul Sottosanti is one of the lesser-known members of the CMU-TOGIT conglomerate, but he maintains some celebrity as a writer of internet articles on Star City Games. He's facing a long road today with just a single bye to propel him towards the Top 64. This round he squares off against Chris Pape, who showed no fear at Sottosanti's name. The two battled while surrounded by wellwishers from CMU-TOGIT, and the atmosphere was irreverent. Sottosanti and Pape kept their game faces on.

Pape had to ship back his first hand. Sottosanti merely nodded. 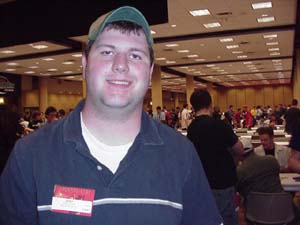 Unfortunately, Sottosanti had to mulligan as well. He stayed on six and they were off. Pape led with Krosan Verge, signaling the persistent Wake. Sottosanti's Bloodstained Mire kept things a secret until a turn-two Goblin Piledriver. It resolved, along with a Goblin Warchief the following turn and Pape was down to fifteen. He popped his Verge and untapped.

With his second white mana available, Pape's hand of Moment's Peace, Wrath of God, Vengeful Dreams and a pair of Decrees of Justice was looking rock solid. He passed it back to Sottosanti, who flooded the board with a Sledder and Sparksmith, charging straight into Moment's Peace. Pape accidentally overpaid for the spell, though, and burned for one.

"Yeah Paul, get in every point while you can!" – Patrick Sullivan

Sottosanti made a Sledder and a Sparksmith, with just one card left in hand. Pape still made no move. Sottosanti swung in and was ambushed by a cycled Decree. Pape immediately started figuring out his blocks, eventually doubling up on the Sparksmith. The table judge pointed out that he'd neglected to draw his card for cycling, and handed him a warning. Sottosanti made a replacement 'Smith and was done.

Pape did nothing. Sottosanti cleared the way for his Sledder with Sparksmith. Pape decided he needed table presence, and hard-cast a Decree for one Angel. Sottosanti did not have a pair of goblins to punish the move. He cast a Piledriver, shot the Angel and responded by eating the 'Smith onto the Sledder. Barbarian Ring finished off the token, and Pape was down to ten.

Pape bided his time, clearing out the Piledriver with a Vengeful Dreams, dropping to eight. He tapped low for Mirari, and a Raging Goblin helped bring him to six. The next turn he waited on his mana, buying time with Moment's Peace. At the end of turn he Cunning Wished for Wing Shards, drawing surprised glances from onlookers. Sottosanti made use of the information, dropping a Burrows and swinging with only one Goblin. Pape took three, sitting at just three life.

His hand was no help to him. He hit the Raging Goblin with Wing Shards on one turn, and the Peaced the next attack, but he failed to turn up an answer, and succumbed.

For Game 2, Sottosanti boarded in three Flaring Pain, two Fledgling Dragon and a Blistering Firecat for two Goons and four Gempalm Incinerators. Pape brought in a pair of Circle of Protection: Red for Mana Leak and Vengeful Dreams.

Pape was on the play for the second game, and opened up a strong grip of three lands including Verge, Compulsion, Renewed Faith, Deep Analysis and Cunning Wish. He kept without hesitation. Sottosanti's decision was tougher. He had Sledder, Warchief and Firebolt, along with four mountains. He sighed and kept.

The Sledder and Warchief hit without incident, and pain from a fetchland brought Pape to fifteen. However, he still didn't have a Wrath or Fog, even with two Renewed Faiths in hand, he was running out of time. He dropped Compulsion using his single island. Sottosanti dropped another Chief and Firebolted, dropping Pape to eight. A Faith brought him back up to fourteen.

Pape made no play on his turn. Sottosanti hit again, bringing him to nine. The second Faith brought him back to fifteen. He Compulsioned away a Deep Analysis. Still nothing. He dropped a Verge and passed it back. Sottosanti hit, but Cunning Wish served up Vengeful Dreams for two on the Warchiefs. The Sledder devoured them and Pape dropped to twelve. Fledgling Dragon joined Sottosanti's team with just four cards in the yard.

Pape's second blue source came late, leaving him with just one card in hand. He picked up two more with a flashed back Deep Analysis, now at nine. Sottosanti hit for three more, leaving Pape at six. He could have tried for the win right there, casting Flaring Pain and a second Goblin, sacrificing them both and swinging with a thresholded Dragon, but chose not to. Pape activated his Verge and Compulsioned away a land. Finally, a Wrath, clearing out Sottosanti's board. He tried a Raging Goblin but Circular Logic took it down, giving Pape a card. Sottosanti was out of gas. He flashed back his Firebolt to take Pape to four.

Pape drew and tapped all his mana, making three 4/4's with Decree of Justice. Sottosanti's only play was a meager Sledder. Two Angels hit, and when his "attack with Sledder" bluff failed to turn up a damage, Sottosanti scooped. 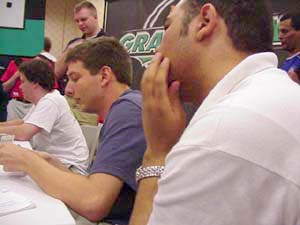 For the deciding game, Sottosanti's first hand featured no lands. His second, only one, but included a Sledder, two 'Smiths, a Warchief and a Firecat. He stared at it, but couldn't keep. Next up was three land including a Burrows and a Ring, and two Sledders. He kept.

He drew a second Sledder and so had three on the second turn. Then he dropped the Burrows and brought Pape to fourteen. Pape continued to drop lands. Another attack brought him to nine. Wrath of God cleared the board. Sottosanti was right back in it with Raging Goblin, bringing Pape to six. Pape stopped the next assault with a Cunning Wish for Vengeful Dreams, but didn't wait for Sottosanti to use his Burrows, so Sottosanti got to play his Goblin Piledriver.

Raging Goblin and Burrows would deal exactly lethal damage, but Pape had Renewed Faith for the save. Circle of Protection: Red looked like it would lock up the game, but Sottosanti was undeterred. He swung, pumped his guy and cast Flaring Pain. Pape showed him Circular Logic, buying a turn. He dropped a Wake with two mana open. Sottosanti swung in, heedless of Mana Leak. He pumped and cast the Pain. Pape conceded.