Round 2: Christoph Lippert vs. Alexander Witt 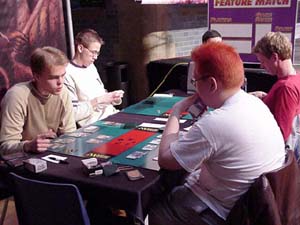 These two are no strangers to the European Pro Tour circuit. In the last season Lippert piled up a very impressive record of three Grand Prix Top 8. Witt is another of the, seemingly infinite, horde of good Dutch players and recently, at Pro Tour Nice, made his claim to fame by winning the Masters.

Not only did he win it by grinding in, taking his second Masters Grinder slot, but he also spread the love by making a large number of money splits along the way.

As they waited for their deck check to end they got a chance to watch the Finnish mirror match - Tomi Walamies against Tommi Hovi – and discuss the weather, which is very chilly in Amsterdam today.

Witt played the first creature in the shape of Hydromorph Guardian but Lippert had Aquamoeba to stop it. The Dutch tried to up the ante with Brawn to burst through but Lippert had Wormfang Drake.

Again the table seemed locked, but again Witt dropped another problem: Seton's Desire on the Brawn, making it a 5/5 trampler. Christoph played Strength of Isolation on Aquamoeba to trade for the Green monster.

Auramancer brought the Strength back but Alexander Witt was all about the "huge monster" theme: Giant Warthog. Despite the size of the beast Lippert had the answer: Wormfang Crab.

The Dutch was forced to say "go" and the German surprisingly sent his Aquamoeaba in! So surprisingly, in fact, that Witt had to confirm the tapped creature was attacking.

He blocked it with the Warthog and when the Strength of Isolation made its "encore" appearance the Dutch sacrificed Nantuko Calmer to blow it. Back and forth Lippert rocked in his chair trying to figure out his math.

Finally he played a second Strength of Isolation to save his Aquamoeba and a Obssesive Search to switch the power/toughness back again to kill the Warthog. If the huge Aquamoeba looked to be the king of the table Witt suddenly changed that. With his hand empty and only Krosan Restorer on the table he drew his card. 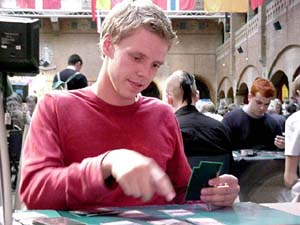 Crush of Wurms. In came three huge tokens and Lippert slipped into a deep silence. He needed an emergency plan. Despite playing an extra blocker the next attack finished the game.

Patrol Hound showed up on the second turn, or as some like to call it "Wuv Muffin", but Lippert was stuck at two lands.

Christoph: "Not a nice way to start."

Hydromorph Guardian showed up but the "Muffin" still pounced on. It even got a Strength of Isolation. Following the mood the Guardian got bigger with a Seton's Desire. 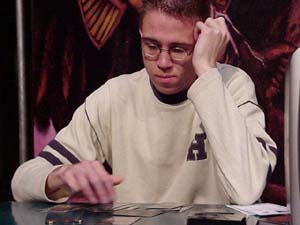 As the German struggled to get out of his mana problems the Guardian brought him down to twelve. Finally the third land showed up. That allowed him to play Skywing Aven.

But Witt was really enjoying being ahead of the game so he followed his Krosan Constrictor with Narcissism and sent his crew in. The Aven took out Constrictor before bouncing back to its master's hands.

The Dutch played a Standstill to seal the deal and on the next turn, after staring at his hand for a moment, Christoph Lippert conceded still with a smile despite his mana screw.