ound two of Pro Tour-Yokohama saw a squaring off of two European stars. Antoine Ruel, of Ruel brother fame, was matched up against Rogier Maaten, a Pro Tour stalwart hailing from the Netherlands. As the players sat down and began to shuffle, they discussed the scores needed to advance to Day 2, and then the Top 8. Even at the start of the tournament, these pros have their eyes on the prize. The players finished the routine and offered their decks and a handshake. As Rogier was shuffling Antoine's deck, Ruel confessed that his construction was just a big draft deck.

"Yeah?" Rogier asked hopefully. (He later confessed to knowing the opposition before sitting down.) 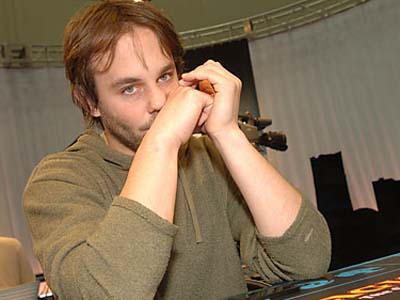 Antoine Ruel turns on the charm.

Rogier, winning some bizarre Euro dice game, kicked things off with a mulligan. His second hand was full of goodness, but for that single Urborg, Tomb of Yawgmoth staring back. Rogier struggled with the hand for a good while. He decided to keep, confident at least that his opponent wouldn't Strip Mine the land with an Urborg of his own. Antoine nonchalantly kept his initial seven, and they began the game in earnest. Rogier led with his Urborg, drawing a raised eyebrow from Ruel, but it was only when Rogier passed on the second turn that Antoine nodded sympathetically. A quick glance from this reporter saw that Maaten had received the worst-case scenario: a second Urborg off the top.

Antoine was certainly not missing his mana, with Mountain, Mountain, Island perfectly fitting his Blood Knight, morph opening. Rogier did start to get in the game with a land into a Prismatic Lens. Maaten's next spell, Stupor, caused some confusion when Antoine's face down creature got counted alongside Antoine's face down hand. Mix-up resolved, Antoine continued to throw damage at Maaten with an end-of-turn Psionic Blast. Maaten stemmed the first rush with Damnation, but Ruel's follow-up Jaya Ballard, Task Mage swung more than once unimpeded. Maaten tried to get back into the fight with a suspended Aeon Chronichler, but Ruel hit Maaten-who was on 6 life-with Jaya plus Fiery Temper. Maaten looked at his pad, shrugged, and picked up his cards.

The mood remained cordial but subdued as the two finished sideboarding. Quick cuts and draws from each saw both players satisfied with their seven. Antoine again led with Blood Knight, which was joined by Sulfur Elemental and a fourth-turn Avalanche Riders. The comes-into-play ability of Darwin didn't seem too offensive against Maaten, who had already played Lens and Phyrexian Totem, but the damage was adding up fast. Maaten later showed that the land loss did hurt, as he missed a sequence of land drops in a row.

He wasn't out of the game, as he used what he had to play three Sudden Death on the Knight, Sulfur Elemental, and a face down Vesuvan Shapeshifter. The lone Avalanche Riders continued to hit until Rogier found his fifth mana and played Void for four at a scant 6 life. Antoine smiled sheepishly and showed a hand of all lands and double Word of Seizing! Rogier seemed taken aback at the split second Rays of Command, but had to concede they were better than the Disintegrate he was fearing. Rogier, with the peek at his opponent's options, decided to use the time to bravely swing in with Phyrexian Totem. The first attack connected, but the second swing saw an active Totem on the wrong side of a topdecked Fiery Temper.

Back to two lands, Rogier looked to be in dire straits. He compounded the situation by laying Terramorphic Expanse and passing, giving Ruel the opportunity to play Word of Seizing and use the land for himself. After that blow, Rogier could only wait for Ruel to finish the job. In the end, it was Psionic Blast and another Jaya that did the deed. Rogier smiled ruefully at his victimization and packed up. With a mutual wish of success for the rest of the weekend, the two competitors went back to their camps to recoup before the next battle. 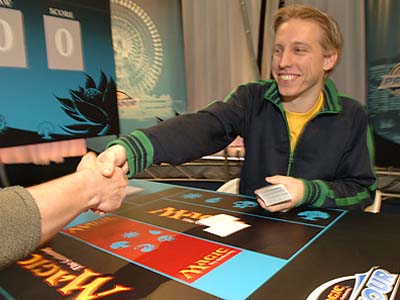