Round 2: Daisuke Haneda vs. Yuji Otsubo 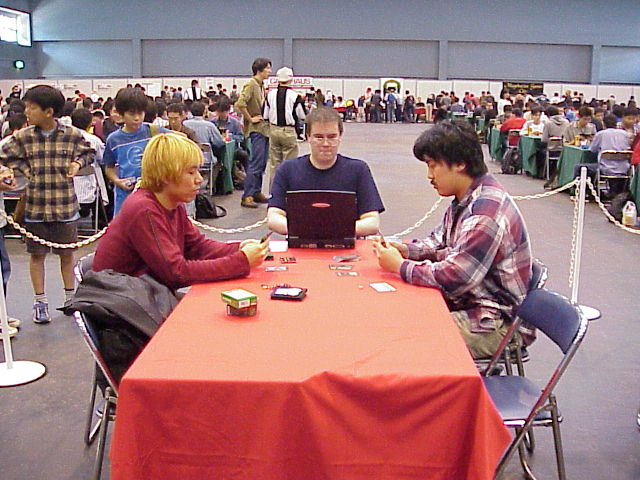 This is the first chance for Tokyo's Daisuke Haneda and Handa's Yuji Otsubo to step into the pit of the Feature March. Otsubo has two GP Top 8s, most recently at Sapporo, while this is Haneda's third Grand Prix. Both players are sporting black, widely panned as Odyssey's weakest color.

Otsubo won the die roll and elected to play, kicking off the party with a Wild Mongrel. A slippery Frightcrawler joined the hound. Haneda laid down a Dreamwinder to slow down the offensive, but Otsubo pushed the Threshold limit by discarding three land to break his way through the aquatic beast. Haneda slipped a twenty under the table and tried to Persuade the Wild Mongrel over to his side, but Otsubo would brook no treachery, and Flame Bursted the traitorous dog. As my grandfather used to say, "That dawg won't hunt no more."

With Otsubo's early offensive pruned away, Haneda took the board solidly into his own hands. Zombie Assassin and Vampiric Dragon helped clear away the Frightcrawler. Despite throwing a Cabal Pit and Patriarch's Desire to slay the Dragon, Otsubo couldn't halt the opposing onslaught and the match rapidly moved to game 2.

Otsubo again elected to play first and kept a 2 land hand with tons of goodies like Second Thoughts, Savage Firecat, and Springing Tiger. The coast seemed clear for Otsubo as Haneda's Crypt Keeper was consumed in Engulfing flames as soon as it hit the table, but Otsubo didn't draw another land for four turns to come. Unfortunately for Haneda, turn 6 was the earliest that he could play a damage source that would stick on the table. Otsubo played a Hallowed Healer, then was forced to play it again thanks to a timely Repel. Haneda's good fortune remained consistent as he coaxed a sixth turn Vampiric Dragon off the top of his library and sent it for the kill. Yet again the bitter bite of the mana screw bug had brought a match to a rapid close.