Round 2: Dane Coltman vs. Jonathan Chan 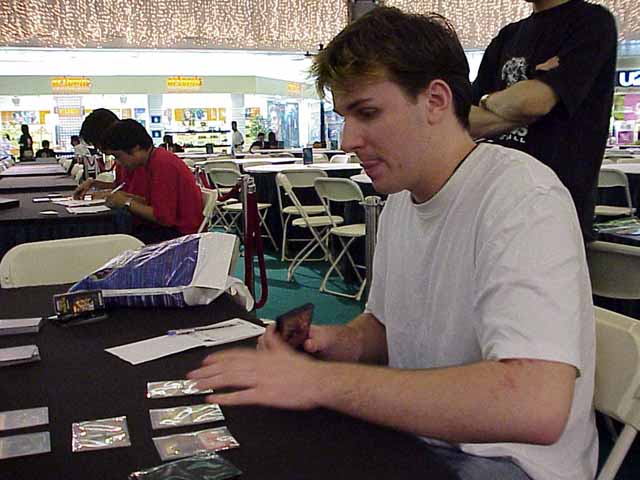 While Japanese players have dominated this event in recent years (claiming 7 of the Top 8 slots in each of the last two years), this was not always the case. In 1997, an Australian claimed the APAC crown when Nathan Russell defeated Toshiki Tsukamoto in the finals. In round 2, two of Australia's brightest hopes for the year 2000 met in a feature match.

Dane Coltman is from Canberra while Jonathan Chan is from Sydney. They are friends who sometimes playtest with each other and often exchange Magic strategy via e-mail. Both did reasonably well at the recent Australian Nationals (Coltman won the draft day and Chan finished 10th overall), but neither made it into the Top 8. Both qualified for the APAC championships on rating. 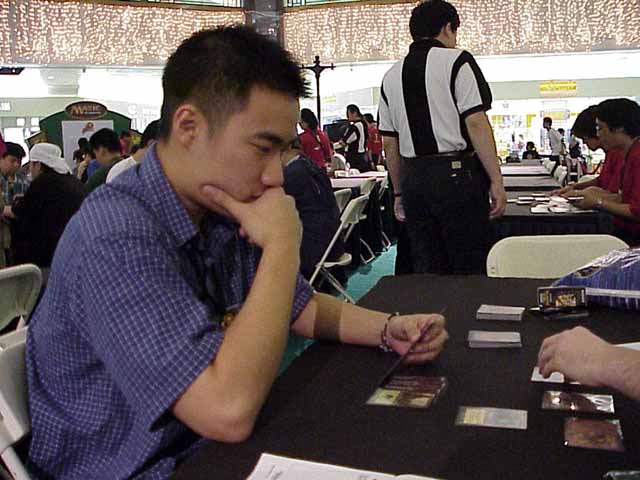 Coltman and his red/white deck came out aggressively in game 1 with Fault Riders on turn 3 and turn 4. Chan answered with Hollow Warrior. Coltman played Laccolith Warrior on his fifth turn, but chose not to attack into the Hollow Warrior since he was tight on land and apparently didn't want to risk being forced to sacrifice any of them. Chan decided to be the aggressor, playing Seal of Strength and Fen Stalker before sending in the Hollow Warrior and a Death Charmer for six points of damage. Coltman cracked back for 5, leaving one Fault Rider on defense while he played a Seal of Fire and left up mana for Lunge. Chan cast a very timely Sever Soul on Coltman's only blocker. The Seals then traded and Coltman used Lunge to destroy Fen Stalker. However, Chan's Agent of Shauku made it really hard for Coltman to race. Agent of Shauku made each one of Chan's creatures into a must-block threat once Coltman got low on life. When Chan dropped both Spineless Thug and Rib Cage Spider on the same turn, Coltman couldn't come up with enough blockers and he conceded to the mighty power of Shauku. Perhaps if Coltman had attacked on turn 5 he could have gotten ahead in the race, but as the game played out, Coltman could neither kill Chan nor block enough creatures.

Coltman led with turn 3 Fault Riders again in game 2 and followed up with Zerapa Minotaur, Lightning Hounds, and then "Wesley" (Flowstone) Crusher. Chan had Vendetta to deal with the Riders, but his entire offense consisted of one Plague Witch and a Spineless Thug. When Chan cast Intimidation on turn 5, it was anything but intimidating. Chan only had 3-power worth of creatures in play to Coltman's 6. And that was before the Crusher hit the table. Sever Soul and Seal of Strength made it look like Chan had a chance to win the race, but Coltman promptly summoned Gerrard's Irregulars and that was the end of that. 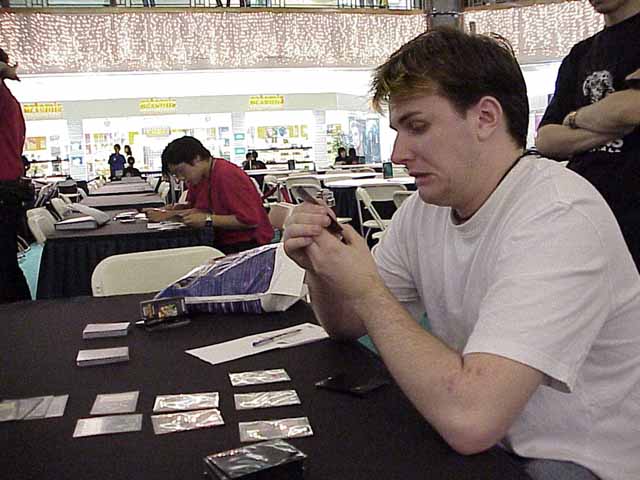 Chan took his attack to the air in game 3. Turn 3 Belbe's Percher was followed up by a Horned Troll that was soon enchanted with Treetop Bracers. Coltman eventually found the plains he needed to cast Nightwind Glider and hold off the Percher, but he never did find an answer to the 3/3, flying, regenerating Troll. Agent of Shauku and Deepwood Drummer made his life even more difficult. Coltman's draw included Predator, Flagship and 7 land, but he just didn't have time to use it. Chan played to win quickly with his fliers, throwing cards through his Deepwood Drummer, and Chan's plan worked.