Round 2: Dave Humpherys vs. Kamiel Cornelissen 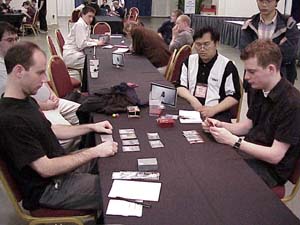 This round Kamiel "The Glacier" Cornelissen found himself paired up against Dave "The Hump" Humpherys. Cornelissen recently had his streak of Pro Tour Top 16's broken when he finished in the Top 32 at New Orleans. When that's the low-point in your career, you know you're doing something right. Coincidentally, Humpherys Top 4'd at New Orleans, adding to his impressive resume. Both are playing blue-black control decks featuring Psychatog, but Cornelissen's is more Psychatog-oriented. Also, both are known for their deliberate pace of play, ensuring that this match would be the last to finish.

Cornelissen won the die roll and chose to draw. He was forced to mulligan, keeping his second hand. Humpherys got on the board first with Nightscape Familiar. Cornelissen Peeked at a hand of two Repulses, land, Counterspell and Fact or Fiction. The hammer fell two turns later when Cornelissen missed his fourth land drop.

Cornelissen tried to Recoil Humpherys's Familiar at the end of his fifth turn. Humpherys responded with a Fact or Fiction that got him Shadowmage Infiltrator and Lobotomy over two lands and another Fact or Fiction. He then chose to protect it with Counterspell. Cornelissen untapped and passed it back.

Now Humpherys turned up the heat. He tried a Finkel, meeting a Gainsay from Cornelissen. He let it go, saving the Syncopate in hand. He played a second Finkel. Cornelissen finally found a fourth land, trying a Fact or Fiction. Humpherys Syncopated. His next turn he played another Finkel, and it stuck.

Cornelissen desperately tried another Fact or Fiction, but Humpherys was having none of it. Counterspell stopped him. He made a Psychatog. Humpherys had two Repulses to his Counterspell. Humpherys's attack reduced him to six. He added a Familiar to the mix, and let Cornelissen have one Psychatog. The second was Syncopated. Cornelissen's painlands left him at four. Cornelissen was tapped out.

Humpherys untapped and dropped Cornelissen to one, losing his Finkel. Then he ran the endless possibilities in his head. Minutes later, he emerged from the think tank, cast Upheaval with enough mana floating to make a Psychatog. Cornelissen scooped. 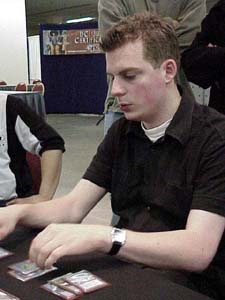 Cornelissen chose to draw again in Game 2, and was again under early pressure from Nightscape Familiar. Humpherys Duressed on turn three, seeing two counters, Duress, Innocent Blood and three land. He chose to get rid of the Blood. His Psychatog drew a counter.

Cornelissen untapped and returned the favor, leaving Humpherys with just Finkel and land with a Duress of his own. Humpherys ripped a second Duress, and it looked like he would walk away with things, but Cornelissen had drawn a third counter. He still had one in hand after Duress resolved. He untapped, drew and passed it back to Humpherys.

Fortune continued to smile on Humpherys as he pulled a Gainsay. That let him push Finkel past Cornelissen's Counterspell. Cornelissen took a hit, then found Repulse, first Duressing away another Gainsay. Humpherys drew another counter like it was nothing, beating out Cornelissen's Gainsay.

The game stalemated for a few turns. At the end of Humpherys's turn, Peek showed that he had drawn two Repulses and Lobotomy. Fact or Fiction gave Cornelissen Peek, Duress and a land over a second Psychatog and a land. Repulse put the Psychatog back, and gave Humpherys Fact or Fiction. He cast it, and presented Counterspell, Nightscape Familiar, Recoil and two land, with two land untapped itself. He ended up scoring the Familiar and Recoil. 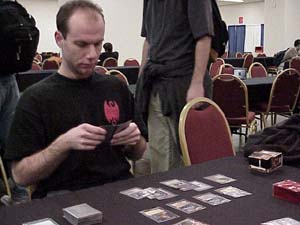 The zaniness of that endstep was kept in check by the players' play speeds. Cornelissen untapped and Duressed away Lobotomy, then played his Psychatog. Humpherys played his Familiar, and tried Recoil and Repulse, drawing Gainsay and Counterspell. That let him resolve Fact or Fiction, and get Finkel and three lands over Gainsay.

Cornelissen was not to be outdone, playing a Fact or Fiction of his own, trying to find a way around Humpherys's Familiars. He got Opt and two land over Innocent Blood and another land. Cornelissen had to reach to get to the end of his graveyard. Humpherys added a Finkel to his team. Cornelissen Peeked at his hand of land. He Coliseumed, then Disrupted his own Innocent Blood to dig deeper. Seven cards remained in his library.

Afterwards, Cornelissen and Humpherys agreed that Nightscape Familiar was, to use a technical term, a beating. Cornelissen's only hope was to get up a bunch of cards, then bounce the Familiars and Undermine. He admitted the hope was slim.