Round 2: Dave Williams vs. Jon Finkel 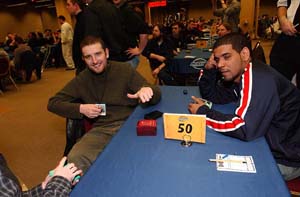 Dave Williams and Jon Finkel sat next to each other and drafted cooperatively, and it paid off for them in the first round... they both won. But all good things must come to an end, and the old friends had to face one another in round 2.

Finkel has a red/green Beast deck, and Williams is playing white/black with two Glarecasters.

To start of the first game, Williams had

on turn three but no play, just a shake of the head. Finkel played a morph creature on his third turn, which was promptly Smothered (it was Venomspout Brackus).

Williams had the better creatures over the next two turns—Dive Bomber and Gustcloak Harrier vs. Finkel's two face-down fellows. The foursome attacked back-and-forth for two turns, bringing Finkel to 8 and Williams to 16 (thanks to a cycled Renewed Faith).

Williams put out a Festering Goblin and Finkel a Wirewood Elf. The Goblin traded with a face-down Krosan Colossus, and the removal spells came out to play. Pinpoint Avalanche took out the Gustcloak, and Cruel Revival nailed the other face-down creature (Charging Slateback), plus regrew Uncle Fester. Advantage Williams. 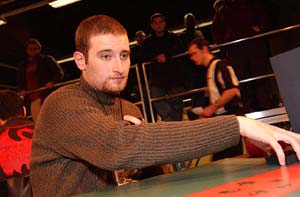 Finkel was forced to use two removal spells to get rid of the Dive Bomber as the first was prevented with Sunfire Balm. Even so, Williams had a second Bomber at the ready, and that one did the final six damage to Finkel, who couldn't get his second Brackus into play and active quickly enough.

Finkel started off with the saucy turn-3 and 4 combo of Wirewood Savage and Snarling Undorak. After netting the one extra card, he sent the Savage in to trade with William's Severed Legion, a trade Williams was happy to make. Williams put out a Dive Bomber on his next turn.

Finkel played his fifth land and hit the Bomber with Chain of Plasma. Williams then made an intelligent play, choosing to copy the Chain by discarding Gluttonous Zombie. Sure, Finkel just pumped it up and attacked, but having to spend his mana in this way prevented him from playing another creature, easing up a little on the tempo.

It was all for naught, however, as Finkel had a string of huge Beasts – Charging Slateback, Krosan Tusker, and Venomspout Brackus. Williams handled two of them via double-blocking and a Cruel Revival, but it's the last fatty you can't deal with that kills you. 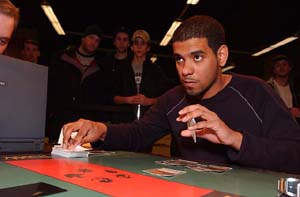 Williams came out with the curve of Severed Legion, Dive Bomber, and Fallen Cleric, and the heat was on Finkel. Finkel played a face-down guy on turn three, nothing on turn 4, and a Pinpoint Avalanche on the 4/2 on turn 5; he was clearly losing the race.

Williams played his own face-down guy and blocked Finkel's, which turned out to be Snapping Thragg. Finkel's 3/3 won the fight and now posed a serious threat to Williams. Williams played out a Glarecaster, but Finkel had his second Avalanche, killing the 3/3 flier and sending in the Thragg to dispose of the Dive Bomber.

It was only a matter of time until the Legion also felt the bite of the Thragg, and then Finkel added a 6/5 Krosan Tusker to the table. William's last four draw steps offered no answers, and the game that looked so good for him at the beginning was lost.

Finkell had been telling his friends before the tournament that he was going to drop after going 0-4 in the first draft. But with a 2-0 start and a strong deck, Finkel already looks to be in good shape to make day 2.

After the match, Williams admits he could have played differently, leaving the Dive Bomber back along with Glarecaster to keep the Thragg from attacking. But he was banking on Finkel not having the second Avalanche, which, of course, turned out to be incorrect.