"I have no plan for the mirror match. And he made my deck!" former World Champion Julien Nuijten laments as he sits down across from perennial Pro Tour standout and 2010 Hall of Fame frontrunner Bram Snepvangers. The two Dutch players prepared together for this event, and their decks and sideboards differ by only a few cards. Julien, however, might be slowrolling a secret weapon:

"My deck box is much cooler," he says, pointing to the massive grinning Squee on its cover.

The two players are both playing aggressive red Goblin decks, splashing black for Earwig Squads and sideboard cards, and Dominaria's most famous death-defying, toy-owning, green-skinned superstar would be sure to look favorably upon his standard-bearer. Well, that's the theory, anyway.

The Dutch-on-Dutch/Goblin-on-Goblin feature match has attracted a squad of onlookers, and the crowd gathers tight around the table as the players shuffle up.

"Success, Bram," Julien says, and extends the hand to start the match. "Success," Snepvangers responds, and they're off.

Both players keep their hands. Bram leads with a turn-one Warren Instigator off a Simian Spirit Guide and a Graven Cairns, and Nuijten replies with a Goblin Guide that he keeps back on defense. Bram plays another Cairns, but because he lacks red mana he can't cast anything through the filter lands. Julien seizes the initiative by deploying an Instigator of his own.

Lavaclaw Reaches comes into play tapped for Bram, and again he's forced to simply pass the turn back without a single red mana to get things going. Julien downs Bram's Instigator with a Punishing Fire, and his team comes crashing in for 4 damage.

"What did they do with the Red Zone? How can I attack?" Julien jokes as he turns his creatures sideways, remembering the old-school Feature Match playmats with their big red "battle zone" for attacking and blocking (now a tasteful gray).

Warren Instigator puts a Mogg War Marshal onto the battlefield along with another Instigator, and Julien passes the turn. 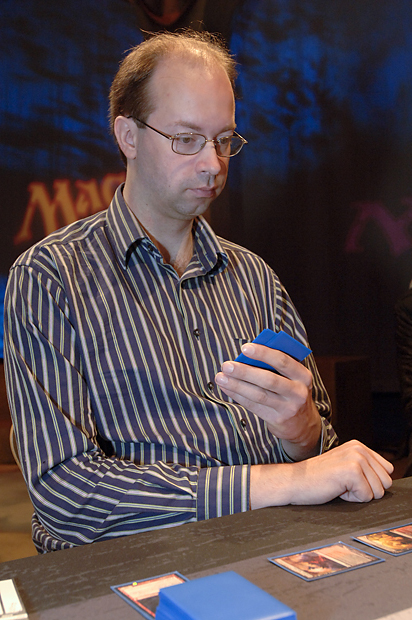 Bram Snepvangers, one of the progenitors of the Dutch Magic scene.

With access to his Lavaclaw Reaches Bram can finally cast spells, and he plays the Boggart Ram-Gang he revealed to Nuijten's Goblin Guide the turn before. Julien returns Punishing Fire to his hand on Bram's end step with Grove of the Burnwillows, and he chooses to pay the echo on last turn's Marshal. Both Warren Instigators get into the Zone Formerly Known as Red, as do the Marshal and the Goblin token, while Goblin Guide stays back on defense. The combination of the Instigators' double strike and the potential for Punishing Fire makes blocking very awkward even for a 3/3 creature with wither, so Bram takes all the damage and falls to 11.

Julien passes. Bram plays out a Tattermunge Maniac and casts a Punishing Fire of his own on one of Nuijten's Instigators. Nuijten dispatches the Maniac with Punishing Fire and untaps. He dives into the tank. While it looks at first glance like the former World Champion commands a sizable lead, a Grove from Bram could get him right back into the game. So it's in Julien's best interest to end things as quickly as possible, and he tries to do just that with a Boartusk Liege. The entire squad attacks, and Bram reveals his own Liege to Nuijten's Goblin Guide. Unable to cast it on just three lands, he scoops up his cards.

Despite their nearly identical lists, Bram's and Julien's sideboard plans differ substantially. Bram removes the full set of Tattermunge Maniacs and three of his Earwig Squads for three Greater Gargadons, a Terminate, a Fodder Launch, and two Brute Forces. Meanwhile, Julien cuts Boggart Ram-Gang, Tattermunge Maniac, and two Earwig Squads for a Terminate, a Fodder Launch, and—despite the matchup being the red-black Goblin mirror—a pair of Deathmarks, which can fend off the hybrid powerhouse Boartusk Liege while doing incidental work against Tattermunge Maniacs and Boggart Ram-Gangs.

Bram mulligans a hand with lands, Goblin Guide, and a Boggart Ram-Gang. Julien keeps. Bram doesn't seem too pleased with his second hand, but it nevertheless enables another turn-one Instigator off Simian Spirit Guide. Julien replies with a Goblin Guide off a Grove of the Burnwillows and, once again, keeps it back on defense.

Bram passes the turn after playing a Sulfurous Springs, unable to create any kind of momentum. Julien builds his position with an Instigator of his own and passes right back. Bram plays a Mountain and passes with Brute Force up to ambush Julien's Instigator in case it attacks. Julien continues the staredown with a Lavaclaw Reaches and declines to attack. Even though this matchup involves two aggressive red decks, the mirror is all about capitalizing on available resources—and Julien—who is up three cards courtesy of drawing first, Bram's mulligan, and Bram's Simian Spirit Guide—sees no reason to hurry

With his fourth land—Grove of the Burnwillows—Bram shifts into gear with a Boartusk Liege, one of the most important cards in the mirror match. Bram declines to attack, however, potentially fearing either the double-block or a retaliatory Instigator attack from a much fuller hand. He passes the turn. 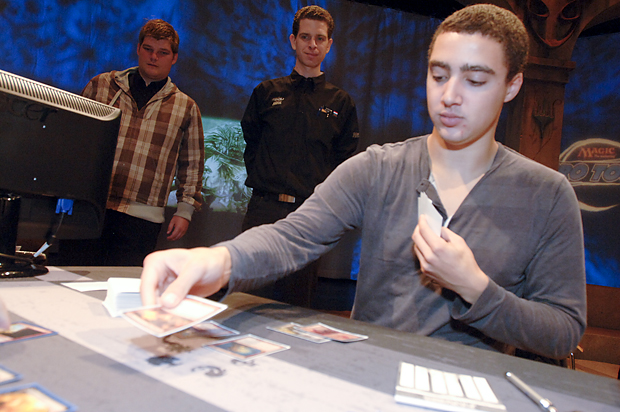 Finally, Nuijten pulls the trigger. He Terminates Bram's Warren Instigator, casts Deathmark on the Boartusk Liege, and attacks with both of his creatures. Goblin Guide reveals a Mountain for Bram, but the Instigator does some work, putting a Boartusk Liege and Earwig Squad onto the battlefield (and netting an extra damage from the Liege's ability).

Bram, meanwhile, can muster only Goblin Guide. Pressing his advantage, Nuijten animates his Lavaclaw Reaches and sends in the team. Goblin Guide and Brute Force take down the Boartusk Liege, but Nuijten's squad still hits for 13. Bram untaps, plays an Instigator, and passes. Again Julien animates Reaches and attacks with everyone, and Bram extends the hand.

After the match, the players talk about their different sideboarding plans. "I don't like Deathmark because all it kills is Boartusk Liege," says Bram after the match. "Liege is important, but you don't want to have dead cards." Julien nods and doesn't argue, but nevertheless: when Deathmark works, it definitely works.