Round 2: East vs. West – A Bombtastic Blowout

vs. West. On one side, Kajiharu80, a squad of young Japanese talent. Tomohiro Kaji and Tomoharu Saito were formerly two-thirds of One Spin, a Top 4 squad from Pro Tour-Atlanta. Joining them as their third is the much-heralded Shouta Yasooka, tasked with the job of filling Kenji Tsumura's slot. On the other side is Southern Comfort, made up of three of the PT's most laid-back personalities - Sam Gomersall, Neil Reeves, and Mark Herberholz. Reeves has a Top 4 to his credit in Team Limited, and Herberholz was the winner of the last constructed Pro Tour in Honolulu, so this should be quite a battle.

In the A-seat match, Kaji and Heezy spent the first few turns destroying each other's lands with Rolling Spoil. Heezy finally got a threat to stick - a Loxodon Hierarch, which got in a few hits on Kaji as countermagic on both sides prevented much else from happening. 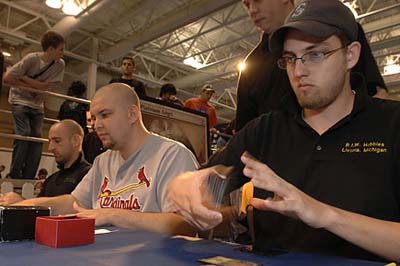 Sam, Neil, and Mark mean business. Really, they do.

In the middle, Reeves was tied up by Grand Arbiter Augustin IV, while on the end, Gomersall's discard and weenie horde was beginning to wear Saito out.

Kaji was down 24 life to 6 when he resolved a Twisted Justice on the tapped-out Heezy, killing the Elephant and drawing 4 cards, shifting the advantage of the game clearly in the Japanese's favor. Each player dropped a Simic Sky Swallower on the subsequent turns, and the game dragged to a halt.

In the meantime, Gomersall took first blood, winning Game 1 of his match.

Kaji was sitting behind a grip full of counters, but Heezy draw steps were laden with land. The Swallowers stayed untapped on guard duty - Heezy didn't want to risk his only threat, and Kaji couldn't risk getting hit for lethal damage. Heezy blew up two more of Kaji's lands, important as Kaji was trying to build up enough mana to play a Skeletal Vampire with a Voidslime or Remand up to protect it. Kaji tried to regain some of his lost mana by Mimeofacturing Heezy's Watery Grave, but there were no more in the American's deck. "No, sir!" Heezy laughed, taking joy in the moral victory.

In the middle, Reeves still had no non-mana permanents out, and was using Prahv, Spires of Order to keep the Arbiter at bay. Yasooka's Court Hussar was plinking away at him point by point.

Kaji finally got enough lands out to attempt Skeletal Vampire against Heezy, which resolved, then followed up with a Moroii, looking to go on the offensive. Kaji's full grip meant he had answers for any kind of comeback Heezy could mount, and enough pressure to win before his own Moroii did him in. Voidslime took care of Heezy's attempted Savage Twister, and the game went to Kaji.

Back in the B seat, Reeves's Firemane Angel was hit by a Twisted Justice - the Japanese felt the card was good enough in the format to split between decks. Debtors' Knell made Reeves's life impossible, and he quickly fell. Japan was up 2-1 in games.

In Game 2 of the C seat, Gomersall had mulliganed to five, and fell in a few short turns to a combination of hasty creatures, burn, and Lyzolda. 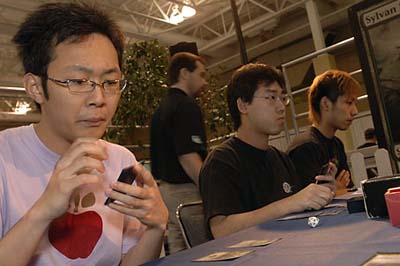 The Japanese steamrolled to an easy win.

Heezy's second game started poorly: he missed his second land drop and was backpedaling against an accelerated stream of bombs from Kaji - Moroii, Muse Vessel, and Skeletal Vampire. A flurry of Telling Time, Farseek, and some Signets got Heezy his mana, but Kaji could protect his Vampire any number of ways, and the flier did Heezy in in a few short turns, giving Kajiharu80 a match win.

The second game of the middle match was a total blowout. Reeves was hit by the Killer Kombo of Wit's End (discarding five), Angel of Despair a Karoo, then Moonlight Bargain back up to full. Twisted Justice took our Reeves's topdecked Firemane Angel, and which point the game was a comedy of card advantage for Yasooka - he was up about 10 cards over the course of four turns. Reeves, dejected, played on, but had no chance of winning from that position. Kajiharu80 secured the round.

To finish things off, Saito completed the sweep against Gomersall in a close third game.

The Japanese strategy was an interesting one - all three of their decks seems great against control. They had one very fast, very dedicated aggro deck, and then two control decks chock full of anti-control cards. They were stocked heavily with countermagic, including Voidslime, Remand, Overrule, Swift Silence, Convolute, and Trial/Error. A look at Kaji's sideboard revealed Last Gasps and Ribbons of Nights - all his anti-aggro stuff. Should the metagame be very control-oriented, expect to see Kajiharu80 at the top of the standings all weekend.