Round 2: Eric Taylor vs. Chris Benafel 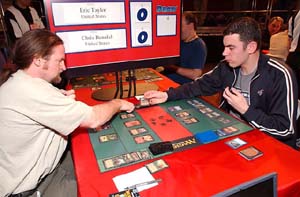 I saw something I had never seen before when I sat down to watch Chris Benafel and Eric Taylor play their round 2 feature match. Benafel won the die roll and instead of choosing play or draw, he chose to flip the mat around! He really prefers to play with his deck on his left and was willing to let "edt" play first in order to get his deck onto his left.

The deck matchup was the classic battle of beatdown versus control. Taylor drafted green-red (mostly green) with aggressive creatures and Overrun. Benafel drafted one of the most popular archetypes amongst PT regulars: black-blue recursion with all the Scriveners, Gravediggers, and instants (especially Aether Bursts) he could find. Taylor should own the early game while Benafel should own the late game. The middle ground, where Benafel is trying to stabilize and Taylor is trying to finish Benafel off, would determine the winner.

Once Taylor dumped is hand full of 5 green weenies at the beginning of game 1 he found himself with just Overrun left in his hand, but Benafel was all untapped with a couple of reasonable blockers. Edt decided he didn't want to lose to Syncopate or bounce, so he just said go. That gave Benafel time to Repel a monster and Scrivener back the Syncopate he had used on turn 2. While Benafel was tapped out from the Scrivener, Taylor knew he had to go for it. Overrun got Benafel down to 9 life and one blocker. More importantly, it forced Benafel to keep playing blockers so he couldn't leave up Syncopate mana. Those blockers were big enough that Taylor couldn't quite break through. He decided to sit back and wait for his two Werebears to grow to 4/4 before making his move. That played right into Benafel's hands, though. Benafel had time to remove both the Werebears before Taylor got to threshold. Once Benafel started bringing back Ghastly Demises with Scriveners, the game was all but decided. 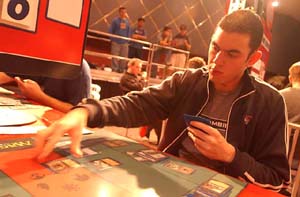 Taylor had to be wondering if he should have been more aggressive in the early game, and between games he asked Benafel if Benafel had been trying to trick him when, on turn 4, Benafel said "I hope that last card isn't Overrun." Benafel said "no, I just really didn't want you to have Overrun." Edt asked if he had a Syncopate at the time and Benafel said (truthfully) no. Taylor could have gone for it a turn earlier, but Benafel's Repel would have kept him alive. It's not clear how the game would have played out from that point, with Benafel at a lower life total and having fewer blockers. Taylor could also have help the Overrun until it was lethal, but Benafel's removal meant that would not have worked out. Mostly it just seemed like Benafel's deck had higher quality cards in it and Taylor's only real chance was to win in an early flurry.

That's exactly what happened in game 2 as Taylor played turn 2 Mad Dog, turn 3 Krosan Avenger, and spent the next three turns playing a pair of Reckless Charges two times each. Benafel was finally able to clear the board with a Morbid Hunger that sent him back up to 5 life, but Pardic Firecat plus Flame Burst finished him off. Benafel explained between games that he suspected Taylor had the Flame Burst, but he had no choice but to kill the Firecat and hope Taylor didn't notice that the Flame Burst would now do three. Taylor noticed. 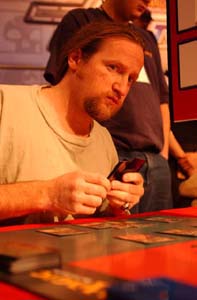 Taylor played the odds properly and kept a one land (plus Werebear) hand while drawing first in game 3. He drew the land he needed, but Benafel Syncopated his Werebear. Taylor promptly drew another land but none of his luck could save him from Benafel's draw. On consecutive turns Benafel played Peek, Syncopate, Patriarch's Desire, Aven Windreader, Aven Windreader, and Scrivener (bringing back Syncopate). Benafel seemed to have total control, but he drew a bunch of lands in the middle of the game while Taylor kept drawing spells. It didn't help Benafel's cause that he put Syncopate into his removed from game pile earlier in the game and thus thought he had nothing better to get back with a late-game Scrivener than Peek. Stopping Taylor's Firebolt could have saved two creatures. In the end both players agreed that Benafel probably should have won the game once it went late, but his mana flood did him in.

Benafel was remarkably calm throughout the match and still introspective once he lost. He seemed respectful of his opponent and basically seemed very little like his notorious bad-boy reputation. Of course, he's also now 0-2.