Round 2: Eric Taylor vs. Peter Szigeti 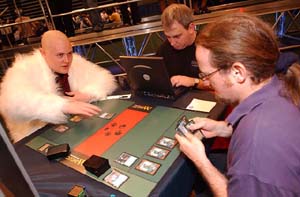 This round two feature match brought to mind 1950's stop-motion animation Christmas specials. In one corner was Eric Taylor, man of the ages, in the role of Yukon Cornelius. In the other corner, resplendent in his yeti suit, Peter Szigeti played the part of The Bumble.

Both players were running blue/green decks that made generous use of the madness mechanic. Taylor version added Opposition and Squirrel Nest, while PTR splashed black for Duress and Engineered Plague.

Taylor played a turn-2 Compulsion which caused Szigeti to raise an eyebrow. Szigeti answered with a Merfolk Looter on turn 2 and used it to enable a turn-3 madnessed Arrogant Wurm, but Taylor had a counter.

Both players madnessed out Arrogant Wurms at end of PTR's next turn (via Looter and Compulsion), and they traded in combat. But PTR had a third Arrogant Wurm and madnessed it out as well.

Taylor couldn't come up with a good answer to the Wurm as PTR had Circular Logics to stop the important spells. Yukon Cornelius succumbed in a few quick attacks from the Bumble. 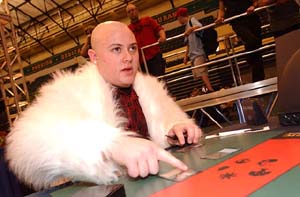 As they sideboarded, Szigeti said, "I have no idea what I'm doing. I probably sideboarded all wrong. My deck probably doesn't even work anymore. Whatever, I'm here to draft."

Taylor player first and had a strong opening of turn-2 Merfolk Looter and turn-3 Wild Mongrel. Szigeti played an Engineered Plague on "Merfolk," and then lamented that he'd just made four cards in his own deck dead as well.

Taylor cast a main-phase Fact or Fiction and chose another FoF, a Birds of Paradise, and a land over Opposition and a land. Szigeti played a Mongrel on his turn.

Taylor then showed why he didn't choose Opposition from the FoF, casting one from his hand. Szigeti pitched two lands to his Mongrel and then Logicked for two. Taylor Logicked back, but PTR had another Logic. The Opposition did not resolve.

Taylor tried a second Opposition on his next turn, but this time Szigeti had Gainsay. Szigeti drew Deep Analysis – "the best card ever" – and netted an extra card with it. He then Logicked edt's Fact or Fiction.

Both players put out additional Wild Mongrels, and Szigeti attacked with one of his. Taylor blocked with both of his Mongrels and an Elf. Szigeti discarded an Arrogant Worm and cast it with madness, but Taylor had a Circular Logic. Szigeti had a Logic of his own, and Taylor, thinking he got way with one, paid the necessary six mana when PTR passed priority. But all that meant was that PTR could successfully Disrupt Taylor's Circular Logic. Szigeti's Mongrel ended up dying and Taylor saved both of his by discarding down to three cards in hand. 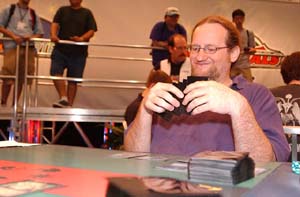 Taylor then cast Fact or Fiction, and Szigeti was forced to make a 4-1 split to avoid allowing Taylor to have the fourth Opposition, a card that Szigeti can't deal with. The extra card advantage turned Taylor's Mongrels into killing machines, and PTR fell in a few turns.

Szigeti came out with a bang in game 3: turn 1 Duress an Opposition, and turn 2 Mongrel. But Taylor played Bird, Mongrel, Mongrel, and had two blue up to counter Szigeti's turn-3 Arrogant Wurm. Szigeti looked deflated.