Round 2: Eugene Harvey vs. Brad Taulbee 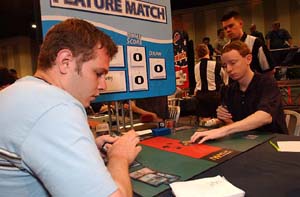 When you lose in the first round of a tournament—any tournament—it is natural to hope for a pairing against a soft opponent. If that was running through Maryland native Brad Taulbee's mind as he sauntered over to look at the round two pairings he was going to be in for a surprise. Waiting for him in the feature match area was one Eugene Harvey. Before people were asking Joe Black for dating advice, Eugene was the man that put TOGIT on the map. A member of the US National team two years ago, Eugene is the reigning National Champ for about 72 more hours and one of the most formidable opponents you can face in this event.

Eugene got things started with a Grim Lavamancer and got his beat on for a few turns while Brad played Islands and Swamps. Eugene stalled at two lands and then at three lands after that. When he tried to enchant his wizard with Elephant Guide, Brad had the Force Spike for his mana stalled opponent. When he tried another Guide the turn after, Brad Smother in response. With not threats on the board, Brad reloaded with a Deep Analysis.

Eugene found his fourth land—his third Karplusan Forest—and took some damage to attempt a Phantom Centaur but Brad had another Spike. Shadowmage Infiltrator made a brief appearance but it was Hammered and Eugene took some damage to play a pair of Rootwallas. Edict dealt with one of them and Brad flashed back his card drawer to find more answers.

Eugene suddenly appeared to be in the game and the surviving Rootwalla took Brad to ten. A pair of Firebolts dropped him to six. Brad Smothered the Rootwalla at the end of Eugene's turn. He played another Finkel and passed the turn back to the Champ.

Eugene played a fifth land to flash back the Firebolt and Brad fell to four. He was holding Upheaval and Zombie Infestation and when he made four tokens after the dust settled Eugene scooped. On his last turn, Eugene was holding a Violent Eruption. If he was anticipating the Upheaval he could have dropped Brad to 2 in response and could have potentially topdecked another Firebolt for the win. Of course, it is only the right play in retrospect—Eugene has to assume that Brad has the Upheaval and either Tog or Infestation. 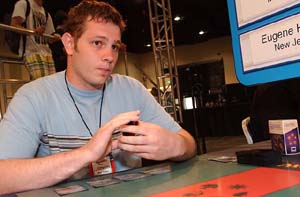 If you have ever wondered how R&D designs cards, Mark Rosewater was watching the match and was inspired to design a card by some sequence of play in Game 1.

One of the problems with playing on a highly visible team like the CMU/TOGIT combine is that opponent's have multiple opportunities to scope out a team's deck. "I played against the same deck in round one—Berkowitz, was it? It's the same deck I assume."

"There are some differences," said Eugene cagily.

Eugene's opening hand with one Mountain went back to the well but the bucket came back with a no-lander and the Champ was forced to go down to five cards on the play. The five cards he kept included a Llanowar Elf and a Wild Mongrel—two cards he had not seen in any opening hand so far.

Eugene led off with the Elf and followed up with Wild Mongrel with the Elf back to catch any Force Spikes. It jumped in front of a Chainer's Edict on Brad's next turn and another Elf joined the Mongrel on the next turn. Now it was Brad's turn to stall on lands. He had all the cards he wanted to see—Persuasion, Upheaval, etc. but only 3 mana. Even a main phase Compulsion on the fourth turn failed to find land number four.

Eugene kept up the pressure with a Call of the Herd and Brad scooped two attack steps later. "Nice mulligan...I have seen much worse." 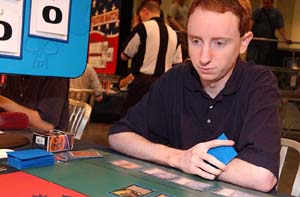 There were no mulligans this time around and Eugene was disgusted when his Grim Lavamancer was spiked. His next play was a Wild Mongrel and that was Smothered at end of turn.

Brad cast Deep Analysis on turn four and Eugene came back with Phantom Centaur. Brad had the option of Edicting or Persuading and chose the latter, gentler option. Eugene seemed displeased and tried to regroup with a Wild Mongrel and a Firebolt make his stolen Centaur smaller. Brad was still holding the Edict and cleared the way. He Smothered Eugene's Call of the Herd token and played a Shadowmage on the next turn.

Eugene attempted to kill Johnny Magic and make the Centaur smaller with a Violent Eruption but Brad had the Counterspell. When Eugene's next draw step yielded no miracles he offered the hand and fell to 0-2.