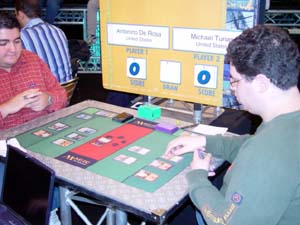 Turian is a Pro Tour veteran with plenty of high finishes on his resume. He's done well in both Limited and Constructed, but he's especially not someone you want to play against when the format asks for forty card decks. This round he's against CMU/TOGIT teammate Antonio De Rosa, who has solid Pro Tour finishes in the past and has done extremely well on the Grand Prix circuit, but is still looking for his first Pro Tour Top 8.

Turian- "We have the best two decks at the table, and we're the two best-looking guys."
De Rosa- "That's true, we are the sexiest"

Turian summoned Leonin Den-Guard, and De Rosa's two-drop was Silver Myr. Turian's side gained another Den-Guard, and De Rosa accelerated more with a Talisman, then played Atog and Pyrite Spellbomb. This kept the Den-Guards back, and Turian missed his fourth land drop and ended his turn. With the board stabilized De Rosa got to work, playing Lumengrid Augur and a second Pyrite Spellbomb. Turian wasn't doing much to build up his side, playing Auriok Transfixer and nothing else for a few turns, The Atog was blocked by both Den-Guards and was pumped, but Roar of the Kha saved Turian's team. This forced De Rosa to at least use the Spellbomb to kill one of the 1/3 creatures. De Rosa's Krark-Clan Grunt was nullified right away with Arrest- despite lacking a fourth mana source, Turian was doing a good job of staying in the game. The Augur started cycling through cards, and De Rosa played Aether Spellbomb. Turian finally found a fourth land, and summoned Skyhunter Patrol. The Augur continued to improve De Rosa's card quality, as he cycled through a land and summoned Goblin War Wagon. Turian's Patrol attacked through the sky for two, and was joined by another. The Wagon and Atog attacked for four, and De Rosa dropped the massive Megatog onto the table. Turian cracked back with his fliers for four, leaving only the Den-Guard on defense. De Rosa summoned Vulshok Berserker, but Turian used Blinding Beam before attackers were declared to slow things down. The Patrols attacked again to bring De Rosa down to nine, and Turian seemed to have a chance at outracing De Rosa's intimidating team on the ground.

Just the Wagon attacked, and was handled with Altar's Light. Augur dug into Wizard Replica, which would have given De Rosa a great blocker if not for Turian playing a Transfixer the turn before.

"Mike Turian is thinking, that's never a good sign. Mike, just follow my theory- when you don't know what to do, just attack with everybody." 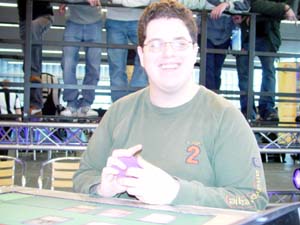 Turian attacked with his fliers, not tapping the Wizard and letting it block one. This telegraphed that Mike wanted all five mana open on De Rosa's turn, showing that he probably had a trick up his sleeve. Indeed, he played another Blinding Beam, and used the Transfixer to tap the Replica. This cleared the way for another four damage, and Turian summoned Skyhunter Cub. This would prove to be too little too late, as De Rosa finally had access to all his creatures. He put them in the Red Zone, which pushed through plenty of damage to take the first game.

De Rosa played a first turn Aether Spellbomb, and Turian cast a Transfixer on turn two. Krark-Clan Grunt gave De Rosa a creature to work with, and Turian played a second Transfixer. This was followed by Skyhunter Patrol, and De Rosa played some more artifacts in Pyrite Spellbomb and Chromatic Sphere, which let his Somber Hoverguard come out for three mana. It was quickly Arrested, and the Patrol attacked along with the Transfixers to deal five damage. The Grunt attacked back for two, and the Spellbomb bounced the Hoverguard to deal with the Arrest. Turian played Raise the Alarm on end step, untapped, and played another Arrest on the Hoverguard. He attacked with his team, and a Myr traded with a Transfixer while five more damage pushed through. De Rosa's Megatog stopped Turian's ground team, but the Patrol attacked for two, bringing De Rosa to six. A second Patrol followed, making the end of the game appear to be even closer. A second Pyrite Spellbomb came out on De Rosa's side, but was less than impressive due to the 2/3 fliers in the air. The Grunt and Megatog attacked, and were each chump blocked by the Soldier tokens. A Spellbomb was sacrificed to make the Megatog bigger, and push through some trample damage. Turian untapped and played Vulshok Battlegear and put it on his Patrol, but it died to Shrapnel Blast. This was a tremendous tempo swing and kept De Rosa alive. He played a War Wagon and attacked with the Grunt and Megatog, forcing Turian to block with his Patrol or die. With De Rosa at five, Turian played Leonin Scimitar, put it on the Transfixer along with the Battlegear, and attacked for just enough damage for the win. 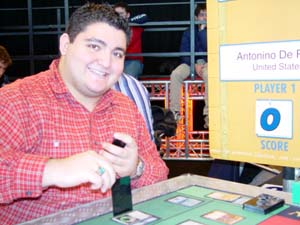 De Rosa opened with Chromatic Sphere, and Turian with a Transfixer. Raise the Alarm and Vulshok Battlegear provided a considerable amount of threats by turn three, while De Rosa had a Grunt and a Frogmite. The Battlegear made a Soldier token 4/4, and it got through for damage while the Transfixer kept Frogmite back. Hematite Golem gave De Rosa a little more to work with, but things became far worse as Turian Arrested the Golem to clear the way for an attack, and played a Den-Guard. De Rosa was trying to keep up by attacking with the Grunt and playing Somber Hoverguard, but it seemed to be an exercise in futility- this was before Blinding Beam, which changed things from unlikely to hopeless. Electrostatic Bolt ensured the win.