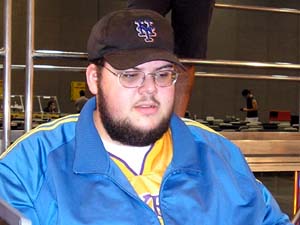 Froehlich, or EFro as he's often called, at one point seemed to be making a run at being one of the top American players. He was playing all the time and was well on his way to becoming a consistent player on the Tour. At some point though he stopped taking the game as seriously, and his results began to reflect that. Recently he made top 4 at Grand Prix: DC as part of Re-Elect Gore, which seems to have rekindled his desire to do well.

Peter, otherwise known as PTR, is a notorious bad boy of the game who has had a good degree of success at points, but he seems to be fading out as his passion for Magic wanes.

As they shuffled up, Eric shook his head and commented, "If he draws Tanglebloom I can't win. I can't deal 24." Now, when someone mentions Tanglebloom in regards to a Pro Tour match, I would usually assume they're joking, but with PTR, you can never be too sure.

In any case, PTR confirmed the alleged fears as Tanglebloom made its debut appearance in the Feature Match area of the Pro Tour. On turn one. The game paused as everyone leaned over to figure how much it was to activate. One mana, one life. Got it.

Peter then missed his second land drop, playing out AEther Spellbomb, and then got hit with a Chittering Rats to compound his difficulties. He added a Neurok Hoversail, then a Copper Myr when he finally found a second Forest. Meanwhile, Eric had played out a Serum Tank and Leonin Elder.

As the game played on PTR was trying to figure out what he could do to avoid photo coverage. Eric looked over and shook his head. "You used to do all sorts of stuff to get in pictures." PTR, seemingly a changed man, replied, "Not anymore. I don't want to get DQ'd, I don't want unsportsmanlike conduct, I don't want to do anything stupid."

He then dropped an Omega Myr…

At this point I'd like to pause for a public service announcement. If you've never played with Tanglebloom or Omega Myr in your deck, it's not because you're missing the latest tech. And if you're confused at this point, well…all I can say is, I was too.

EFro attacked with the Rats and Peter blocked with Omega Myr. Eric shrugged. PTR dropped out a Tooth of Chiss-Goria and pumped his Myr, so the creatures traded. At some point during this exchange, PTR reached up and wrote all over his Feature Match nametag in a continued attempt to avoid having photos taken…

And promptly received the Unsportsmanlike Conduct warning he had been hoping to avoid.

"Why would you give me feature matches? You know I'll do something stupid."

Playing on auto-pilot, Peter attacked with a Morningstar-wielding Copper Myr and walked it right into a Soul Nova. Eric cracked back for three and played out a Mystic with the scores at 25 to 11 in his favor. Tanglebloom was no match for the lifegaining powers of Leonin Elder.

Over the next couple turns Peter played out a Steel Wall and used a Rebuking Ceremony to try to climb back into the game, but he was too far behind and eventually fell to Eric's attackers.

He followed it up with Copper Myr, matched by a Gold Myr and the usual Chittering Rats from Eric. Peter drops a Morningstar and simply puts it on his Myr, while Eric adds a fat elephant tapper in the form of Loxodon Mystic.

Over the next few turns PTR played out some more random creatures, but had seemingly forgotten about his Skullclamp. His Lumengrid Sentinel traded with a Drill-Skimmer, but no cards were drawn. When he Domineered EFro's Gold Myr, he tapped two mana and moved his Morningstar onto it, but then took it back, and looked down, shuffling his cards around the table.

Finally he put the Skullclamp on the Gold Myr and drew two, then played out Omega Myr. Eric just had a Pteron Ghost and a Leonin Scimitar that equipped the Rats. Peter took the ensuing attack and fell to 17.

PTR forgot to use his Tooth of Chiss-Goria as his Neurok Spy took Eric to sixteen. He then clamped Copper Myr and added a Tangle Golem. Neurok Spy and the Pteron Ghost traded hits for a while. Meanwhile Omega Myr and the Morningstar were both removed by Soul Nova.

Peter still wasn't using the Skullclamp at full effectiveness, but he managed to find a Fangren Hunter and Steel Wall to add to his team. The Hunter hit once and then PTR summoned a menacing Broodstar, noting that it was only one of the two in his deck. All of a sudden the random artifacts made (a little) more sense.

He then turned to Genesis Garcia at the next table and tried to lean over and read his nametag.

EFro shook his head and looked up at the fresh nametag Peter had been occasionally threatening to deface. "If I write on your sign would you get kicked out?" That seemed like his only hope, but a Murderous Spoils that he had drawn the turn before the Rebuking Ceremony let him stabilize and steal the Skullclamp. Unfortunately, it also gave Peter two cards, and one of those happened to be the second Broodstar. Game over.

PTR drew up a hand with no lands and flashed it to Eric, then sent it back. He kept the six and led with Steel Wall and Copper Myr. Eric answered with a turn three Chittering Rats for the third time in a row. Peter summoned a third turn Cobalt Golem, followed by Arcbound Worker and Neurok Spy, all the while singing songs about his Broodstars.

Eric used Consume Spirit on the Neurok Spy and Murderous Spoils to kill the Myr and steal the Hoversail. He then added a Den-Guard and sent it to the air along with a fresh Slith Ascendant and Drill-Skimmer. Peter just had Tanglebloom. When Eric removed the Cobalt Golem with Altar's Light, the game was all but over.

So what was up with Peter's deck? It seems he decided to go all in on the Broodstar plan, including random one cost artifacts over solid spells like Predator's Strike. My only question is how Myr Landshaper failed to make the cut. Make the Broodstar cheaper and pump it up.