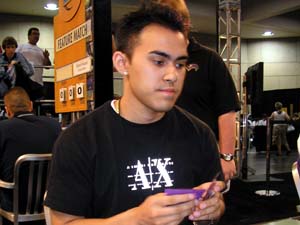 players drew first round in their respective matches when time ran out. In a situation where you need four wins (twelve points) to qualify for day two, a draw is essentially a loss. Therefore, this match is very important with both players- a loss will mean being backed into a corner, with a 4-0 record being the only way to play tomorrow.

Garcia played Wizard Replica on turn three, and Jorstedt's first action came in the form of a fourth turn Skyhunter Patrol. Garcia added a Drill-Skimmer to the air, and Barbed Lightning cleared the Patrol out of the way, letting Garcia's team attack for three. Jorstedt had six lands out, and nothing to play. Garcia summoned a Leonin Den-Guard to put a little more pressure on the table, and even on turn seven Jorstedt still had nothing. He took four more damage, and Garcia played Leonin Elder. At this point in the game, Jorstedt had two Soul Novas and two Echoing Decays, but wasn't too eager to use them on Garcia's creatures since they weren't particularly threatening on their own. Plus, Wizard Replica could stop one of the Novas, and was protecting the Drill-Skimmer. Once he got to seven mana, Jorstedt was able to Nova the Replica, which made the Skimmer open for Decay. Garcia played Auriok Siege Sled, and Jorstedt had another Soul Nova to take care of the threat. Regress saved it, and Garcia summoned Clockwork Condor. It was removed thanks to Echoing Decay, and Garcia kept bringing the threats by summoning Spire Golem.

Thanks to Thunderstaff, Jorstedt was able to slow things down and stabilize, since Garcia's team didn't feature many heavy hitters. This was changed in short order, as Garcia brought out a Loxodon Mender, and Vulshok Gauntlets went on the Golem. The Gauntlets were switched to the Den-Guard, and Jorstedt responded by killing it with Terror. This forced the Golem to stay tapped, at least for a turn. Jorstedt attacked back with Frogmite and an Elder, and played Skyhunter Cub. Garcia put the Gauntlets on the Elder and attacked with it, along with Loxodon Mender. Jorstedt cast Roar of the Kha with entwine, and the resulting block sent Jorstedt's Cub and Frogmite, and Garcia's Mender and Elder to the graveyard. Garcia played the Siege Sled that had been in his hand for a while, gave Spire Golem the Gauntlets, and attacked for nine. He also played Auriok Bladewarden, but didn't move the Gauntlets onto it. This slowed down his attack a bit, but Jorstedt could only muster a Razor Golem for defense. A turn later, he conceded.

Jorstedt had a much better opening draw this game, curving out with Leonin Elder, a Den-Guard, and Razor Golem. Garcia played a third turn Spire Golem, and Jorstedt's Golem took a Leonin Scimitar, which made it big enough to get by the 2/4 flier. Garcia played Wizard Replica, and Jorstedt gave his Den-Guard Vulshok Morningstar, putting even more pressure on the table. Garcia's team was able to get through the air, but three damage wasn't nearly enough to put a dent in Jorstedt. Psychic Membrane came out to hold down the fort, but it was killed with Terror and Jorstedt attacked to for lethal damage. 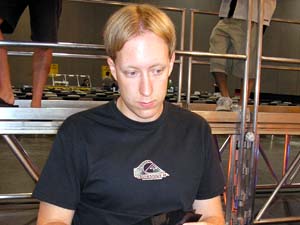 Vulshok Morningstar and Scythe of the Wretched gave Jorstedt some early equipment, and Garcia once again started bringing out the fliers with Spire Golem and Clockwork Condor. Jorstedt summoned Razor Golem, and Garcia's fliers dealt five damage. He played a Leonin Elder, and Jorstedt put the Morningstar on the Golem, attacking for five. Wizard Replica gave Garcia another flier and a life point, and he attacked once more for four damage, bringing Jorstedt down to nine. Garcia played a Den-Guard, and Terror killed the Elder. The Golem was chump blocked by the Den-Guard, and Jorstedt summoned Skyhunter Cub, giving it the Morningstar. Garcia's fliers were now looking less impressive, and they stayed back to block. The Condor jumped in front of the Cub to buy some time, and Garcia attacked with Spire Golem on his turn. Roar of the Kha untapped the Cub and let it block the Golem, but Barbed Lightning took it down to force a trade. The Scythe went on the Golem and dealt five, while Garcia's Replica got through for a point. On Jorstedt's following attack, the Golem would have been bounced by Echoing Truth, but Razor Barrier stopped that plan. The Replica attacked for a point once again, and Garcia played Psychic Membrane. Twice, Jorstedt seemed like he wanted to Echoing Decay the Membrane, but realized that wouldn't kill it. This allowed Garcia to chump block, but Raise the Alarm was able to do the rest.