former world champion had to start the tournament "early" (before round 3:) Tom van de Logt. He won back in 2001, but not enough of his rating was left to give him more than 1 bye. 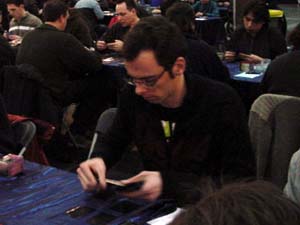 He came to Hasselt from nearby Holland, and had the opportunity to show he still possessed the skills that got him to the top five years earlier.

Both players were playing Golgari, but Tom splashed some white cards into his deck, while Holger preferred to include some blue cards.

He won the roll, and wanted Holger to start. Holger had to mulligan, and was shy on mana and good creatures. By turn 6, all he had was Elvish Skysweeper, Thoughtpicker Witch and Dimir House Guard, while Tom had far better quality in Bramble Elemental, Shambling Shell, Greater Mossdog and Golgari Brownscale. Things were looking a bit better when Holger presented his bombs: Vulturous Zombie was put into play, and Moldervine Cloak enchanted it. However, Tom showed his Overwhelm, and Holger had to scoop.

In Game 2, was the one who had to start and to mulligan. Holger got a bit of a flying offense going, but Tom's Selesnya Sagittars produced a stand-off, and it looked like the players were getting ready for a long game. However, Holger managed to get some card advantage with Savra, Queen of the Golgari and Dimir House Guard, and Selesnya Guildmage made it impossible for Tom to keep up. 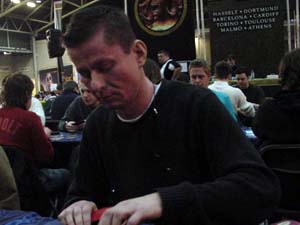 Holger started Game 3, but got a bit behind because of Tom's Selesnya Evangel. He tried to get rid of it with Keening Banshee, but Tom had Wojek Siren to keep it alive. Tom built a small army, while pressuring Holger with Sewerdreg. Holger got to play his Zombie again, but he was too far behind, and two alpha strikes ended the game.

After the match, I had a little chat with Tom. He still plays in the weekends, but not as much as he used to during the peak of his Magic career. His most recent Pro Tour was last year in Philadelphia, so he hasn't been away from the circuit as long as Jakub. He tries to go to the Grand Prix that aren't too far away, so expect him to show up again in Dortmund next month.