The team of the Japanese powerhouses Tomoharu Saito, Kenji Tsumura and Yuuya Watanabe ended up drawing in the first round. I asked Tomoharu Saito what happened prior to the match and he just replied: "Our opponents talked quite a lot to each other; that must have helped. But they were nice guys, don't get me wrong!" 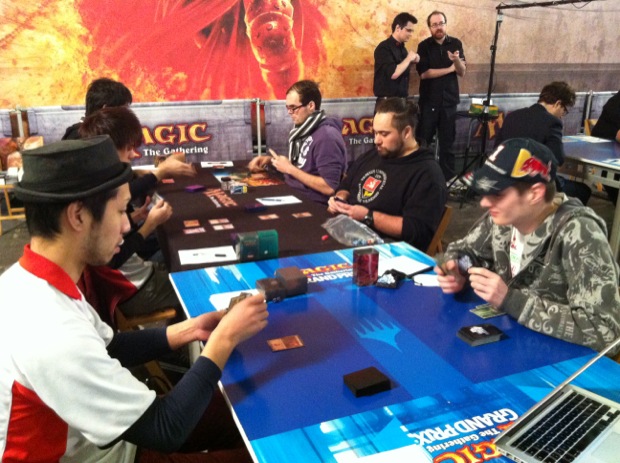 With a little more space between the individual seats in the feature match area, it doesn't look like there will be that much communication going on between the 3 tables in this match. This is probably good news for the Japanese team that boasts some of the most impressive individual records in Magichistory. The team of Chris Tank, Bruno Gehrts and Timon Bepperling, however, will now have to figure out how to best approach this uphill battle.

The pairings were as follows:

Bruno Gehrts was the first of all the players to make a play and he went up against Kenji Tsumura. His Nyxborn Rolliker dealt first blood on his second turn after a Fall of the Hammer cleared the path. Tsumura, who was playing a W/U deck, stabilized quickly, thanks to Omenspeaker, Loyal Pegasus and Triton, Fortune Hunter. It seemed like he was about to assemble his own engine.

On table C, Yuuya Watanabe and his B/U deck went up against Timon Bepperling who went with W/U. With Hopeful Eidolon and Oreskos Sun Guide on the field, he seemed in pretty good shape. 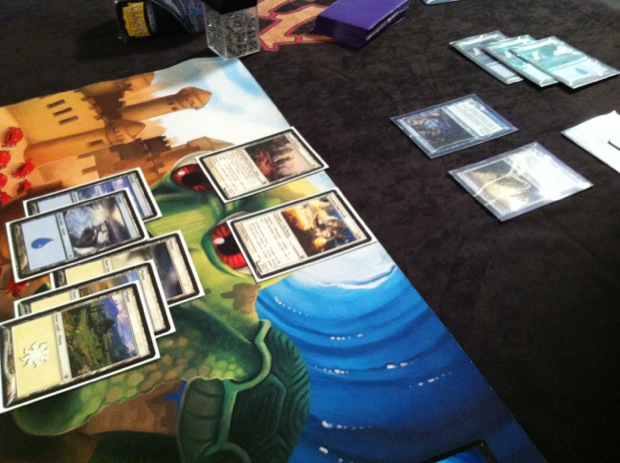 A Voyage's End sent one of Watanabe's creatures back to his hand, allowing Bepperling to get some damage in with his attacks. When Nyxborn Shieldmate enchanted Oreskos Sun Guide the following turn, more damage was dealt, seemingly putting Bepperling far ahead.

Watanabe tried to fight back with Vortex Elemental Guardians of Meletis and Sealock Monster, seemingly leveling the field. 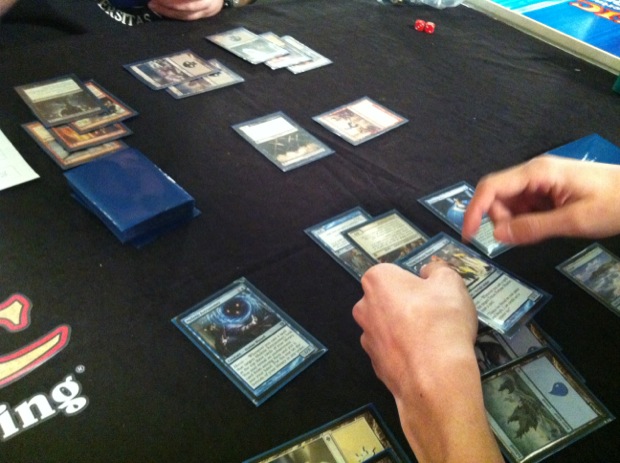 Kenji Tsumura cast Eidolon of Countless Battles and Nyxborn Triton on Triton Fortune Hunter and his opponent Bruno Gehrts didn’t like what he was seeing. Over the course of the following turns, the gigantic Triton Fortune Hunter cost Gehrts creature after creature, so he was falling behind quickly and it didn't seem like his deck would provide him with an out anytime soon or so he thought at least: "My first game will soon be over." 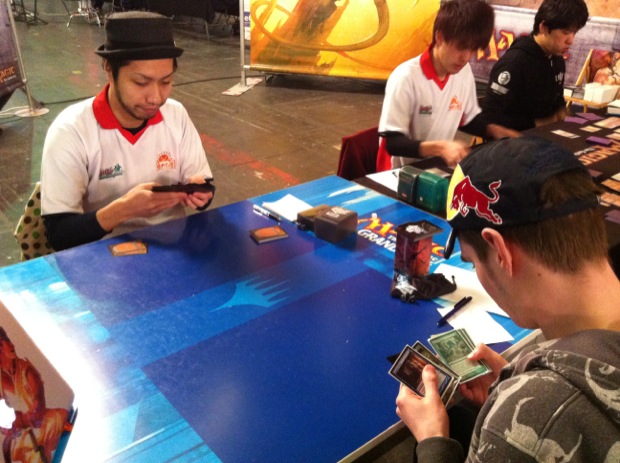 Meanwhile, the game between Tomoharu Saito and Chris Tank on table 1 had already ended with Saito applying plenty of pressure with his aggressive B/R deck that Tank simply couldn't handle. 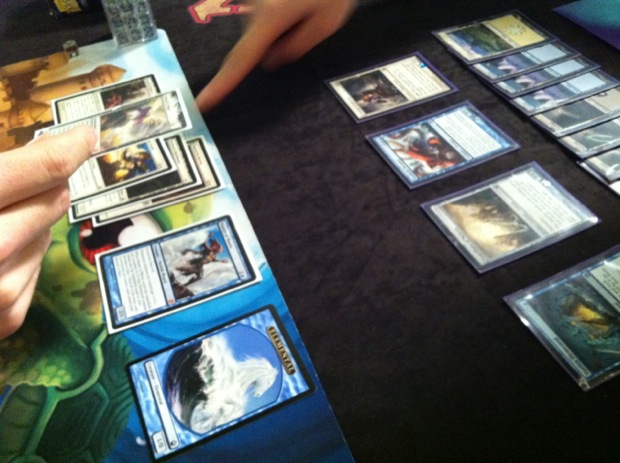 Bepperling targeted Oreskos Sun Guide with the 3rd Enchantment: Heliod's Emissary. He declared an attack, but Watanabe found a way to send his opponent's creature back to his deck. That meant that Hopeful Eidolon, Nyxborn Shieldmate and Favored Hoplite became creatures, so Bepperling still sported a decent field and he didn't feel like stepping on the break anytime soon. 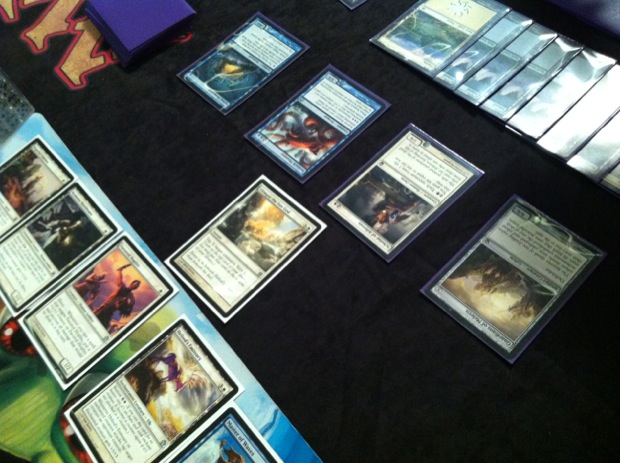 Glimpse of the Sun God tapped Vortex Elemental and Sealock Monster. Watanabe only had Guardians of Meletis left to stem the bleeding and after the attacks concluded, both players were left with 16 life. This seemed like it would go on a little longer...

Tomoharu Saito had a great start into the second game with Kragma Butcher. It was joined soon by Spearpoint Oread and Deathbellow Raider. Tank tried to stop his opponent's onslaught with Snake of the Golden Grove to buy himself some time, but Fall of the Hammer dealt with it momentarily. 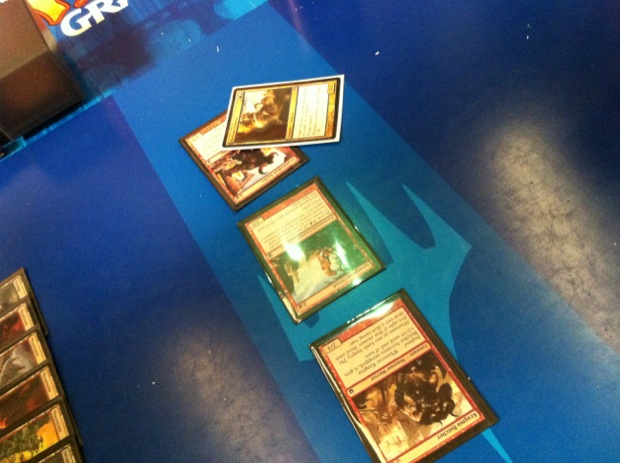 Saito had the perfect answer with Boon of Erebos for Tank's second attempt to hang in there with the help of Anthousa, Setessan Hero. All good things come in threes, Tank must have thought, this time trying his luck with Horizon Chimera that got enchanted with Feral Invocation, but yet another great answer from Saito, Necrobite, crushed all of Tank's hopes to ever turn this game around.

When the next flurry of attacks connected, it was Saito who came out victorious!

I went back to the table of Kenji Tsumura and Bruno Gehrts. A Phalanx Leader joined Tsumura's party who already had an enchanted Omenspeaker on the field. Gehrts tried to enchant his own creature, but a timely Voyage's End foiled that plan. 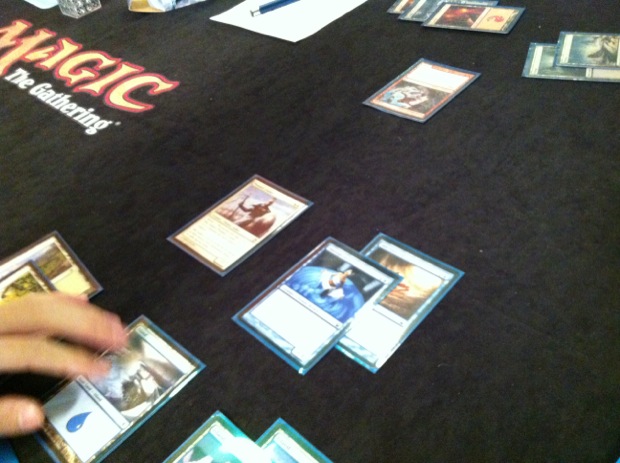 Ephara's Enlightenment was next on the Phalanx Leader and a Loyal Pegasus after that was all the Hall of Famer needed to wrap things up in the second game!

Even though just a few minutes had passed after I left the table of Yuuya Watanabe and Timon Bepperling, both were already shuffling up again. An Eater of Hope had done just what the name implied after Scholar of Athreos had bought the Japanese enough time to cast it. 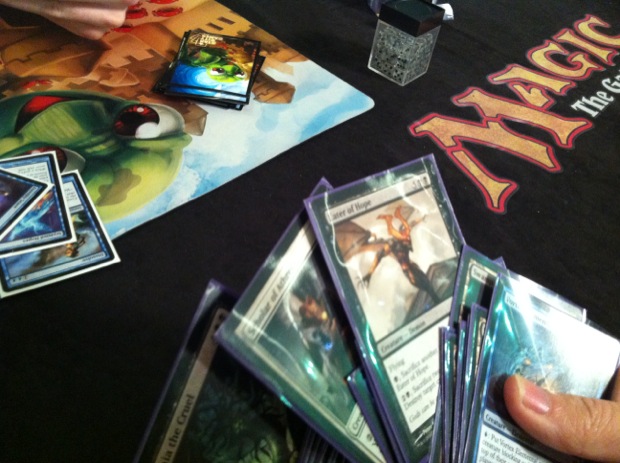 Timon Bepperling admitted that even though his team just took a severe beating, it was a great experience playing against a team of some of the most accomplished names in Magic. He thanked his opponent Yuuya Watanabe again for pointing out some of the mistakes he made in the game; this useful advice might help his team accumulate some wins of their own over the following rounds. 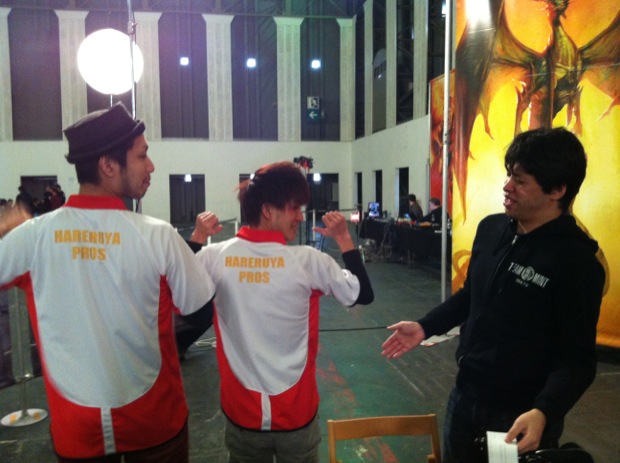 Team Japan rebounds from a Draw in the first round!