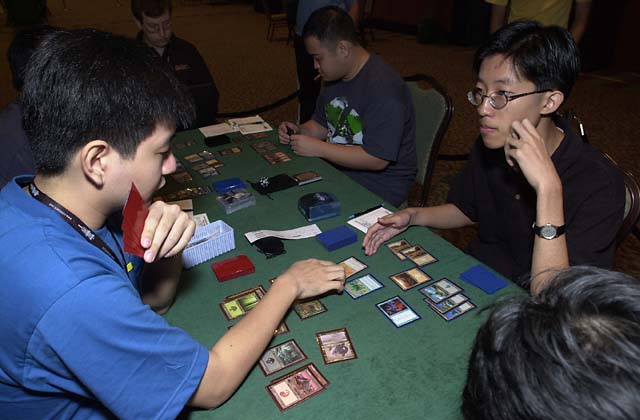 This round put Albertus Law into the spotlight, currently Asia Pacific's top ranked limited player, and fresh off a Top 8 appearance in Pro Tour - Barcelona. His opponent was Jonsen Sulaeman of Indonesia. Law started Game 1 with a Stormscape Apprentice, which immediately began to administer the beatings on a hapless Sulaeman, visiting him three times before Sulaeman managed to draw a much-needed forest in order to cast an Urborg Elf. Law increased his attack force with a Sea Snidd, and decided that the Stormscape Apprentice was more important than stunting Sulaeman's mana, and held back the apprentice rather than run it into the Elf.

Sulaeman played a Fertile Ground which allowed him to play an Ebony Treefolk. With Sulaeman tapped out, Law sent in the Sea Snidd. Sulaeman decided not to trade, but instead added a Thicket Elemental to his army with the kicker, which fetched a Lava Zombie. After some thought, the Zombie sent the Ebony Treefolk home.

Law appeared not to put up any resistance against the oncoming onslaught, going all the way up to six lands with just the Stormscape Apprentice and Sea Snidd in play. He blocked the Zombie, but had Pollen Remedy waiting to save the Snidd. Sulaeman then decided to try and remove the Snidd with Fire, which The Law allowed. A Penumbra Kavu joined Sulaeman's forces. Law cast a Worldly Counsel for just two cards, keeping an Aurora Griffin, and deciding not to play it immediately. On Sulaeman's next combat phase, the Elemental was tapped down, but Law still took hits from Sulaeman's other creatures. When Sulaeman tried to replay the Ebony Treefolk, Law had a Prohibit waiting.

With the Treefolk gone, it was now reasonably safe to play the griffin, although "safe" isn't exactly the right word to use when facing against a variety of creatures, all of which happen to be larger than your own. Sulaeman tried to cast a Bloodfire Infusion on his Penumbra Kavu. That brought out a Recoil from Law. Unfortunately for him, Sulaeman simply discarded a swamp and replayed the Kavu. Law was still very much lacking in offense, sending in the Griffin in the hopes of topdecking something good. When an Andradite Leech came in, Law's situation looked even more dire. He seemed to have trouble drawing his spells, with eight land in play and two lands in his hand. Although a Tidal Visionary eventually traded with the Urborg Elf, Law simply drew more land and conceded the first game.

In preparation for the next game, Law took out his Tolarian Emissary, and replaced that with an Honorable Scout for the damage races to come; while Sulaeman brought in a Yavimaya Barbarian and an Insolence, which replaced a Shivan Zombie and a Caldera Kavu. This time, Albertus elected to play first, and kept his initial hand. On the other hand, Sulaeman opened with just one forest and a handful of black and red cards, so he was forced to mulligan into a hand which contained a Fertile Ground, a Slingshot Goblin and four lands. 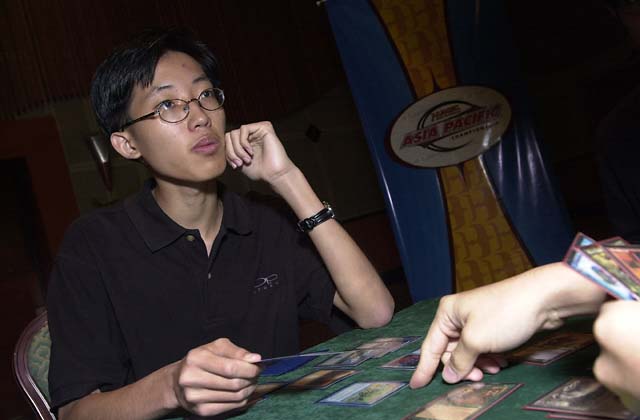 This time, Law had better luck drawing his business cards, Recoiling Sulaeman's fertile swamp and playing a Living Airship to face off against an opposing Nomadic Elf. Playing a Silver Drake, Law appeared to be able to just win any damage race through the air. However, a Yavimaya Barbarian clearly spelled some trouble, for all of Law's defenses (both in play and in hand) were blue. With that in mind, Law decided to go for the beatdown, attacking with the Drake. The fact that Sulaeman's Slingshot Goblin was forced to stay behind to threaten any creature that should block made the race more into Law's favor, as Law would be taking three damage a turn in comparison to Sulaeman taking five a turn. When Sulaeman tried to Annihilate Law's Silver Drake, Law used a Rushing River to rescue it.

However, that set Law far back enough so that the damage race was now in Sulaeman's favor. Law's replayed Drake could block, but would die to the Slingshot Goblin and thus Law decided to let the damage through. An Ebony Treefolk joined Sulaeman's forces, making Law's situation very precarious, should he decide to continue to try and race Sulaeman. However, with a Spinal Embrace in hand, Law could remove the Ebony Treefolk and gain some much needed life in order to swing the game enough to win the race. Providing he could draw a sixth land.

On the last turn, Sulaeman had a Yavimaya Barbarian, the Urborg Elf, the Ebony Treefolk and the Slingshot Goblin in play, with 5 life remaining and facing off against a Silver Drake and an untapped Living Airship. With only a Necravolver in hand, Sulaeman had to either remove one of Law's creatures or remove Law himself in order to win the game. Sulaeman sent everything in (sans the Goblin) in a massive attack, while Law chose not to block anything, instead playing his Pollen Remedy with the kicker to prevent six damage to himself, reducing the fatal 9 damage down to just three. He could have chose to block the Elf, but didn't want to risk the victory he had on table. With both his creatures and himself intact, Law simply swung with the Drake and the Airship to deal the final five points of damage to Sulaeman and even the game at one game apiece.

With his recent win, Law felt that his current configuration was sufficient to win the last game for him. However, Sulaeman had some opinions of his own. He brought in an Ana Disciple, a Mourning and a forest in exchange for a Stone Kavu, a Quicksilver Dagger and a mountain. Sulaeman decided to play first in the deciding game, and both players kept their opening hands.

Law started out aggressively with a Tidal Visionary, while Sulaeman opted to develop his mana base with an Urborg Elf. Both creatures visited the other's controllers for a single point of damage, while an attempt at a Yavimaya Barbarian was Prohibited. A Recoil on the Urborg Elf neutralized Sulaeman's mana advantage, while Law was able to continue the offensive, adding an Aurora Griffin to his forces. Sulaeman tried to match that with a Necravolver with the green kicker. A Coalition Honor Guard solidified Law's defense, while a Penumbra Kavu increased Sulaeman's offensive capabilities. However, a Rushing River gave Law the distinct tempo advantage.

Sulaeman's lack of black mana was clearly hurting him, as his Urborg Elf was unable to support the multiple black cards in his hand. In the meantime, the Aurora Griffin managed to bring Sulaeman's life total down to single digits, and now he was in danger of dying to the Griffin.

Desperate for options, Sulaeman played an Andradite Leech with only one black source of mana, but it's alternative (Lava Zombie) would put Sulaeman too far back to catch up. He tried to outmatch his opponent with large creatures. However, he drew a Soul Burn, and the tide turned once again to his favor, ensuring that he would be able to win the race. Unfortunately, he messed up. Tapping the Urborg Elf for black mana, he then tapped three forests and three mountains and promptly said "Soul Burn", indicating at Law's Coalition Honor Guard. Unfortunately, he failed to realize that he could only cast a Soul Burn for three damage, which resulted in three damage on the Flagbearer and a point of mana burn. The Kavu and the Necravolver once against paid Law a visit, and this time, the Kavu met up with the Visionary. 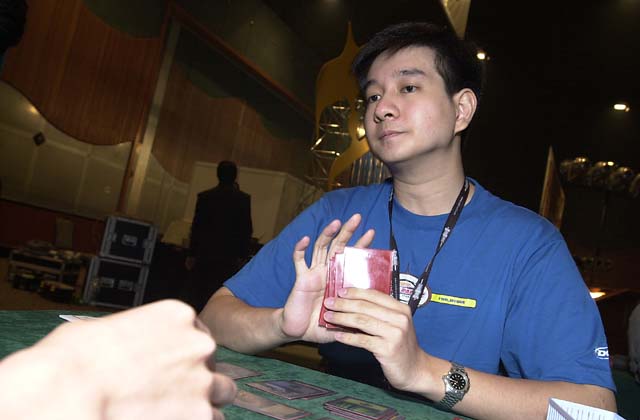 Now, Law was forced to go on defense. The point of mana burn taken from the misplayed Soul Burn was not enough. Attacking with the Aurora Griffin would only bring Sulaeman down to one life. Once again, Law's hand contained just land. After losing all his creatures, Law could only hope to topdeck a Spinal Embrace. However, he only drew even more land and conceded the match.