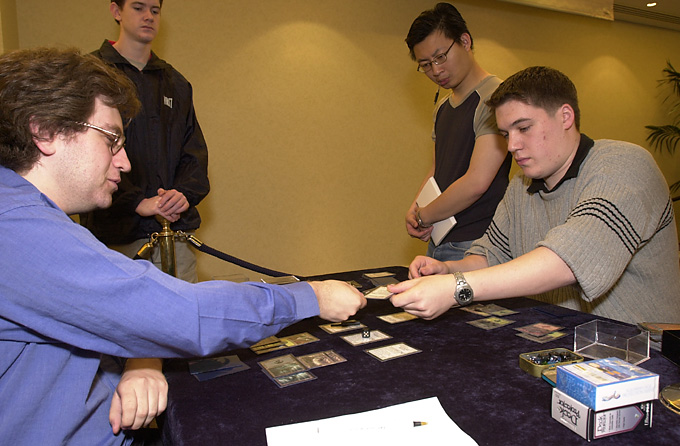 These two giants of Grand Prixs faced with similar Green/Black base decks, with the exception that Kai played red for a few cards, in particular Goblin Bombardment and Fanning the Flames. Kai decided to play the Bombardment on particular due to the amazing synergy with such cards as Living Plane and Tombstone Stairwell. Alex was riding on what he called "Good Karma" after beating Mike Long the previous round.

Both players came out fairly slowly, but Alex had mana problems, missing land drops on turns 3-5. Kai had problems capitalizing, only casting a third turn Groundskeeper. But this changed quickly as Kai dropped a 5th turn Maro, forcing Alex to come up with a quick answer. Alex put out a Deepwood Tantiv to block, but it didn't do much to stop the oncoming 5/5 Maro. The Maro was able to get Alex to 6, but in the intervening turns Alex was able to draw four more land, and able to cast a Bone Shredder. Kai had a hand of 6 lands and so wasn't able to pressure Alex at all. Alex, on the other hand, cast Mishra's War Machine. With Kai unable to draw any non-land spells, the War Machine came over three times, the game ending with it being Explosive Growthed for the win.

Alex was again having mana problems in the second game, missing a land drop on the third turn. But he only missing that turn, and was able to stabilize the game with a Deepwood Tantiv. Budde cast a Tracker and a Plague Witch, and was able to deal with the Tantiv by Explosive Growth. Kai then cast a Mishra's War Machine for beatdown, putting Alex on the back foot. But Alex finally drew his fifth land, and was able to Banish the War Machine. Alex finally started achieving control at 8 life, casting Hell's Caretaker, and used a Bone Shredder to start controlling the board. Things got steadily worse for Kai, with Alex using a Black Lotus to summon a Triskelion which 'savagely' comboed with Hell's Caretaker. Things finally got much worse for Kai when Alex drew a Survival of the Fittest, Kai realized this was just about game, and so cast his Tombstone Stairwell. Alex then proceeded to Survival out every creature in his deck and swarm Kai with an army of Hasted Zombies for the kill.