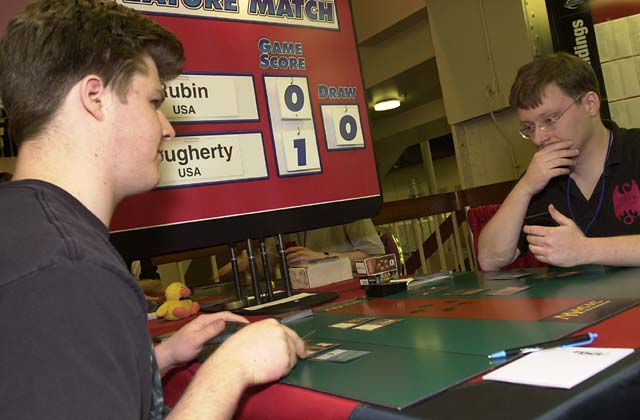 Game one, Ben won the coin flip and chose to play first. Upon seeing his opening hand, he mulliganed to six. Ben made a turn two and turn three Obsidian Acolyte before getting stalled at three plains. Rob cast Pincer Spider, Kavu Monarch, and Kavu Aggressor consecutively and in the next turn cast Savage Offensive before his attack step. Ben shrugged and scooped, revealing to me and some onlookers all the blue cards he had in hand, which included two Opts and Faerie Squadron.

After sideboarding for a million minutes, we moved on to game two where Ben decided to play first and again he had to mulligan to six cards. In this game, Ben cast two Crimson Acolytes, which are much better against Rob's red creatures than the Obsidian Acolytes are. For about twenty turns, Ben held off Rob's army of Kavus with a Benalish Trapper and the two Acolytes (With a Collective Restraint in play and two different basic land types), until he could get a Faerie Squadron with kicker out to start attacking through evasion. However, the creature stall lasted so long, and Rob had gotten enough damage through, that Rob had enough time to draw into two Scorching Lavas (which were useless as creature kill because of the Acolyte's ability). Ben being at four, Rob cast two Scorching Lavas at him. This was slightly comical because the game had lasted so long with the creature stall. Even the audience chuckled at the anti-climactic ending.