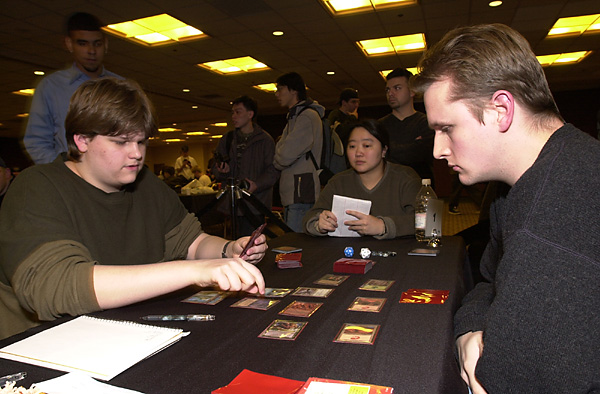 In the second round of the Chicago Masters Series, the audience got to witness a rematch of last year's Pro Tour - Chicago finals when Bob Maher, Jr. sat down to play Brian Davis. Maher won the previous match, and he was playing an aggressive red, white and green deck with a lot of creatures and a few tricks as well. His deck also held an Obliterate, a pretty powerful reset button. Davis, who lost the finals last year, was with black and blue, a very popular color combination in Invasion limited. His deck included blue tricks, solid creatures and a Tsabo's Assassin.

Brian won the die roll and opted to play first. His opening hand held two islands, a Duskwalker, a Ravenous Rats, an Urborg Phantom and a Vodalian Serpent. After some thinking, he decided to keep the hand in spite of it being far from perfect. However, if he could draw into a swamp, then the draw would be remarkably better. Bob mulliganed once, and then he kept his second hand with a land an a Quirion Elves.

Brian didn't draw the swamp though, so he played three islands and then missed his fourth land drop. Meanwhile, Bob played forest, mountain and then Quirion Elves, calling white. So in spite of him missing his third land drop, he was able to cast a Hunting Kavu. He drew another land, a mountain, during turn four, and so he got out an Ancient Kavu as well before Brian drew his first swamp.

With a swamp finally in play, Davis cast Ravenous Rats, and Maher discarded a Thunderscape Apprentice. But the following attack took him down to 13 life, and Maher had more creatures and cast a Razorfoot Griffin. Davis, feeling the pressure, cast Vodalian Serpent without kicker, so when Maher attacked with his two Kavus and the Griffin, he double blocked the Hunting Kavu with his Rats and the Serpent to kill it. Maher chose to deal all the damage to the Serpent, Davis went down to eight life, and then Maher cast a Pincer Spider without kicker.

Davis drew a fifth land and played it, and then he played a Faerie Squadron with kicker. And when Maher attacked with his Ancient Kavu only, the Ravenous Rats stepped in front of it. When Maher passed priority, Davis dropped his Tsabo's Assassin, and with the Squadron and the Assassin in play, it seemed like he could be able to stabilize the game. But Maher sent all his creatures over, and a Breath of Darigaaz with kicker finished Davis off.

Davis chose to play first again in the second game, and he kept a pretty aggressive opening hand. He then played Urborg Phantoms on turn three and four. Maher kept his three-land hand and cast a turn three Harrow, and then he dropped a fourth turn Serpentine Kavu to try and stop the Phantom assault.

But Davis had a Repulse, and the Kavu was returned to Maher's hand. The two Phantoms knocked Maher down to eleven life, and then Davis played a Ravenous Rats. Maher didn't have a hard time deciding what to discard though. "I guess I won't need this," he said, putting an Agonizing Demise into his graveyard - a pretty dead card as he had no swamps in play.

Maher then dropped a Sulam Djinn, and the 6/6 creature blocked one of the Phantoms. Thanks to the Gaseous Form-ability though, the Phantom survived, and Maher found himself at seven life when the Tsabo's Assassin hit the table. But re-casting the Serpentine Kavu, Maher suddenly had two huge blockers that could stop the Phantoms and survive to boot.

Davis attacked with his Phantoms and the Ravenous Rats, and when Maher blocked the Phantoms, Davis let them die so that he could kill the Sulam Djinn with the Assassin. He then cast a Duskwalker with kicker, and at six life, things looked pretty bad for Maher. Unable to block the Duskwalker, he decided to go offensive instead - he cast a Pouncing Kavu with kicker, attacked with the Pouncing Kavu and the Serpentine Kavu. He also boosted the Serpentine Kavu with an Aggressive Urge so that he got to draw a card.

Davis's following attack took Maher down to one measly life, and Brian then summoned a Vodalian Serpent with kicker. But Maher had drawn a Shackles and locked the Duskwalker locked in a tapped position. He then cast a Razorfoot Griffin to get an additional blocker, and then he passed priority.

A little controversy happened during Davis's ninth turn. What is clear is that he activated the Tsabo's Assassin to kill his Duskwalker, and then he cast Recover, played a swamp and re-played the Duskwalker with kicker. However, Maher was pretty certain that the swamp he needed to be able to cast the creature with kicker was the second land Davis had played that turn. Davis, on the other hand, disagreed - and as it was impossible to reconstruct the game in a way that would reveal what had happened, head judge James Lee ruled that Davis could play the swamp and the Duskwalker with kicker.

Maher played a Raging Kavu during his own turn, and then he attacked with his four creatures. Davis was at twelve life, but he simply blocked two of the creatures and that was game.

Maher finally got to play first in the third game. He kept a hand with two lands, a couple of creatures and his Obliterate, while Davis kept his hand with four lands and various blue spells. The latter turned out to be his problems in the game though, as Maher dropped a turn two Yavimaya Barbarian. Davis got out a turn two Vodalian Zombie, and both players started attacking.

Maher stalled at three lands, but he got to cast a Raging Kavu and then a Quirion Elves, calling white. Meanwhile, Davis got out two Tower Drakes - but they didn't help at all when Maher slapped an Armadillo Cloak on the Yavimaya Barbarian. From that point on, Maher gained four life a turn while Davis took four damage a turn. Davis got out his Tsabo's Assassin and he was also able to Repulse Maher's Razorfoot Griffin. But soon he found himself at one life, and Bob then cast Breath of Darigaaz for the kill.